Hillary Clinton tweeted that if the impeachment provision in the Constitution will not cover "the offenses charged here," then it should be "abandoned" to a paper shredder.

On October 7 2019, the following image appeared in a Facebook group. It purportedly showed an undated Fox News coverage still, further displaying what appeared to be a tweet from Hillary Clinton three days before: 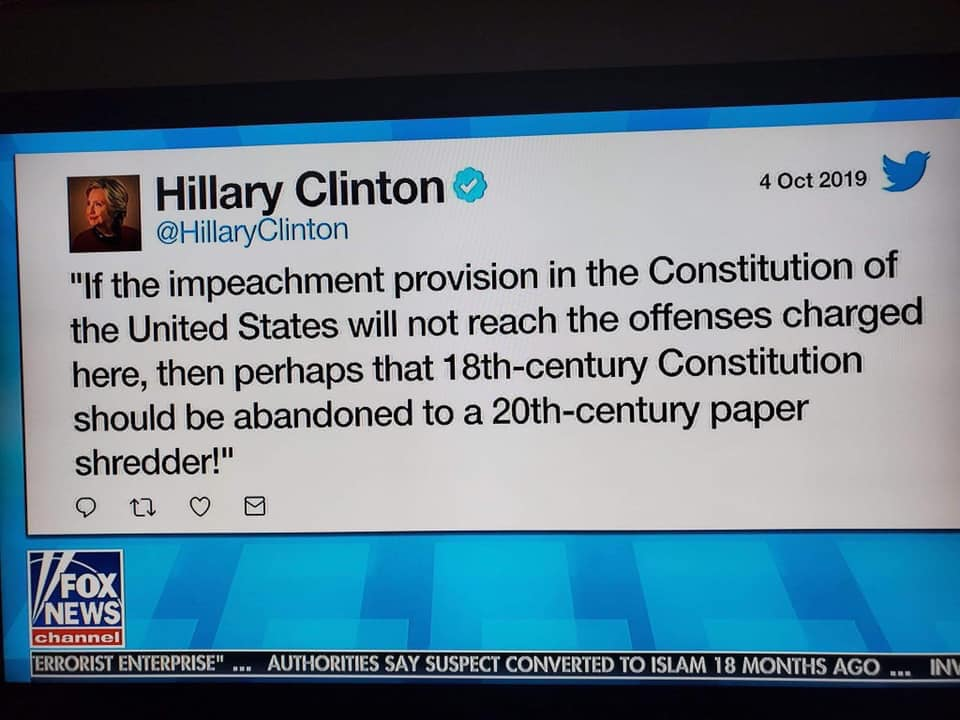 Y’all see this?! Wow! Just wow! She wants to abandon the principles our country was founded on. She is the true enemy of freedom!

In the screen capture, an apparent tweet from Hillary Clinton on October 4 2019 is visible, and it says:

“If the impeachment provision in the Constitution of the United States will not reach the offenses charged here, then perhaps that 18th-century Constitution should be abandoned to a 20th-century paper shredder!”

From the looks of the image, someone had possibly captured a still of a screen from their phone or a similar device. However, no contextual information about which talk show or news segment it might have been was included in the post.

We tried to verify whether the image was an authentic screen capture from Fox News, but came up empty-handed. As far as we could see, no one reported on the purported segment, nor did anyone share the image anywhere that was visible on Facebook or Twitter.

It is possible the image was authentic and honestly represented a Fox News segment that aired at some point between October 4 2019 (the date of the tweet) and October 7 2019 (the date of the Facebook post.) However, our inability to authenticate it left open the possibility the image was manipulated or otherwise doctored to create a false impression that Fox News had displayed the tweet.

It is true that Clinton tweeted that phrase. However, the “screenshot” of the tweet also deleted an important and specific detail:

“If the impeachment provision in the Constitution of the United States will not reach the offenses charged here, then perhaps that 18th-century Constitution should be abandoned to a 20th-century paper shredder!” —Rep. Barbara Jordan, 1974 pic.twitter.com/TkF3MdYWsL

Clinton also tweeted about her involvement as a young lawyer in the early stages of the Nixon-era scandal which came to be known as “Watergate”:

Because I have a life you can't make up: as a young lawyer I worked on the Watergate impeachment inquiry. One of my jobs was to sit alone in a windowless room and listen very carefully to tapes of President Nixon’s phone calls. #tbt pic.twitter.com/1z5XockMxy

In April 2019, a segment on NPR called “Echoes of Watergate Today” included clips of archival recordings involving the House Judiciary Committee in July 1974. In that segment, reporter Linda Wertheimer’s commentary is interspersed with lawmakers’ remarks from those recordings. Barbara Jordan, described by NPR as the first black woman elected to the House from the South, is quoted making the statement Clinton later tweeted:

BARBARA JORDAN: We the people — it’s a very eloquent beginning. But when that document was completed on the 17 of September in 1787, I was not included in that we the people.

WERTHEIMER: That was Barbara Jordan, Democrat of Texas, the first black woman elected to the House from the South. An imposing person with a powerful mind and a powerful voice, she took a larger view of impeachment. She looked at the Constitution of the United States.

JORDAN: A president is impeachable if he attempts to subvert the Constitution. If the impeachment provision in the Constitution of the United States will not reach the offenses charged here, then perhaps that 18th-century Constitution should be abandoned to a 20th-century paper shredder.

We have been unable to substantiate to our satisfaction whether Fox News really aired the creatively edited tweet from Hillary Clinton, and if so, whether the network purposely elided her attribution of the commentary to Jordan — which in turn made the quote appear to be from Clinton herself. Regardless of the clip’s authenticity, it spread on Facebook viewed as a legitimate Fox News screenshot, and was shared by people believing it to be exactly that. Clinton did tweet some of the words shown on the capture, but the attribution (“Rep. Barbara Jordan — 1974”) was noticeably absent in the screenshot. That deleted context obscured that Clinton was quoting a Watergate-era hearing.