An inauthentically organized, corrosive disinformation campaign taking direct aim at social resilience and anti-racism pushes has taken over school boards throughout the United States in what appears to be a highly coordinated national push — which as of June 2021 has made its way from local school boards all the way into state laws.

These hastily-written, often highly vague laws ban critical race theory, which has been an established academic concept for more than four decades:

The core idea is that racism is a social construct, and that it is not merely the product of individual bias or prejudice, but also something embedded in legal systems and policies.

The basic tenets of critical race theory, or CRT, emerged out of a framework for legal analysis in the late 1970s and early 1980s created by legal scholars Derrick Bell, Kimberlé Crenshaw, and Richard Delgado, among others.

A good example is when, in the 1930s, government officials literally drew lines around areas deemed poor financial risks, often explicitly due to the racial composition of inhabitants. Banks subsequently refused to offer mortgages to Black people in those areas.

The moral panic around critical race theory (oftened shortened to simply “CRT”) and also threatening ethnic studies programs is the end result of a weaponized disinformation and propaganda campaign that has also been ongoing for decades. As a result, no one attacking it seems to be able to define it, but Republican-led states have moved swiftly to ban it:

At the same time, inauthentically organized and sometimes violent events that are calculated to push scholars and lawmakers out of government and academic positions and put white supremacists and other conspiracy theorists into them have been seeded across the nation, specifically coalescing around local races and school boards, many of which are recorded in this thread:

One such instance of inauthentic organization in New York City was quickly uncovered by an open-source researcher who was able to link it to a public relations and lobbying firm out of Washington, DC that specializes in right-wing causes:

The Center for Union Facts is a known right wing anti-union organization run by a man dubbed Dr. Evil, Rick Berman. Rick Berman is a DC lobbyist who has fought against Mothers Against Drunk Driving, the Human Society and a slew of other organizations at the behest of moneyed interests via his lobbying group Berman and Co.

Berman & Co. admitted their role in the astroturfing campaign when contacted by reporters for Vice and responded with a statement:

With support from a diverse group of concerned parents in New York, we launched the Prep School Accountability project. The schools’ defensive response to such an uncontroversial message—teach students how to think, not what to think—shows the overwhelming need for the project. It also explains why most of the parents supporting this project chose not to be identified right now for fear of retaliation or being ‘canceled.’ As the group grows, we expect more parent supporters will choose to be identified publicly.

However, that a lobbying group was organizing and networking “concerned parents” was not disclosed by networks providing them airtime:

As Fox News reported on Monday, the group founded by Berman drove at least one van in front of a New York City prep school. Fox News described the group as “some fed-up parents here in New York City taking it to the next level” and as “anonymous parents.” The Fox News segment does not mention Berman or his firms.

A New York Post also published a follow-up story reporting on the vans showing up at several schools. Just like in the first story, there is no mention of Berman, and the campaign is described as a “$10,000 campaign, which was coordinated by an anonymous group Prep School Accountability.”

The inauthentically organized outrage is not limited to the East Coast. Grifters and gadflies who until fairly recently were still talking about QAnon, “Stop the Steal,” or pushing anti-vaccine conspiracy theories (or some combination of the three) have suddenly pivoted to anti-CRT campaigning all over the country, and the engines of mass disinformation have thrown everything they can into using it as a firehosing tactic.

How to Fight Disinformation — Part I: Firehosing

University of California Humanities Research Director David Theo Goldberg described receiving an early mailer, observing that it was a well-organized and slick campaign, and noted a connection to the Heritage Foundation, which appears to also be part of the push to demonize critical race theory. He also observed there was no attempt to define what it might be, instead relying on vague insinuations and frightening hints:

When I picked up my mail a few weeks ago, I found a thick hand-addressed envelope with no return address; the contents included an eight-page-long screed denouncing CRT as “hateful fraud.” The documents are copies of resources prepared by the Chinese American Citizens Alliance Greater New York (CACAGNY), which filed an amicus brief in the failed Supreme Court case challenging what the group characterized as discrimination by Harvard University against Asian American applicants. The materials echo essays sponsored by the Heritage Foundation, which calls CRT “the new intolerance” and “the rejection of the underpinnings of Western civilization.” The materials suggest a more coordinated campaign than many seem to have realized; I am surely not the only one who received this package.

What do all these attacks add up to? The exact targets of CRT’s critics vary wildly, but it is obvious that most critics simply do not know what they are talking about. Instead, CRT functions for the right today primarily as an empty signifier for any talk of race and racism at all, a catch-all specter lumping together “multiculturalism,” “wokeism,” “anti-racism,” and “identity politics”—or indeed any suggestion that racial inequities in the United States are anything but fair outcomes, the result of choices made by equally positioned individuals in a free society. They are simply against any talk, discussion, mention, analysis, or intimation of race—except to say we shouldn’t talk about it.

Far-right activist Christopher Rufo, the de facto face of this particular campaign, has openly admitted that they are trying to taint the public’s perception of what the entire concept of critical race theory is: 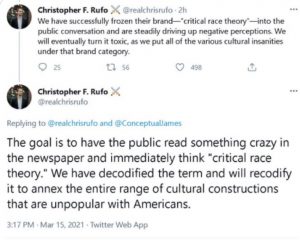 The far right has long set its sights on critical race theory and ethnic studies programs, and there have been a number of disinformation campaigns aimed directly at schools and school boards for years. Some of the same entities behind a previous push are reappearing now to try again.

For example, a scandal-riddled school superintendent named Tom Horne started a similar campaign against ethnic studies programs in Tucson, Arizona in 2010; the rhetoric at the time was almost identical and also involved related, but then far less sophisticated, disinformation networks:

In 2010, then-Arizona Superintendent of Public Instruction Tom Horne crafted the law, which led to the elimination of the Mexican-American studies program at Tucson Unified School district.

The law’s language singles out programs that promote the overthrow of the U.S. government, promote resentment toward a race or class of people, are designed primarily for a particular ethnic group, or advocate ethnic solidarity rather than treating pupils as individuals.

Many of the questions put to Horne focused on why, specifically, the Mexican-American studies program at TUSD was targeted, and not other ethnic studies programs. Questions also touched on Horne’s earlier efforts to end bilingual education in the state and replace it with language immersion.

Although Horne presented the law he wrote — which was found unconstitutional in 2017 — as a response to a speech he heard by Latina activist Dolores Huerta, the truth is that he already had set ethnic studies in his sights, as he made clear in a 2007 speech that he gave to the Heritage Foundation:

Because of the extreme pressures to achieve proficiency in the subjects that are tested, many schools teach only what is tested. This means that the knowledge of history among American students, which has been abysmally low for many years, has declined precipitously from even that abysmally low level. Many elementary schools teach no history at all. Students arrive in middle school not having heard of Christopher Columbus or George Washington.

I am a proponent of a curriculum developed by E. D. Hirsch, called Core Knowledge. Students get a content-rich curriculum in American history, the Greco-Roman basis for Western civilization, and science beginning in kindergarten, first and second grades. As they get older, they can learn history in much greater depth because they have been exposed to it when they are young.

As of May 2021, galvanized by the success of critical race theory bans, Horne has decided he will be running for Arizona schools superintendent.

When viewed through an anti-disinformation lens, coordinated and highly choreographed multipronged attacks such as these appear to be taking direct aim at the entire concept not just of critical race theory but of building resilience, a crucial aspect of withstanding hybrid attacks and active measures across entire societies:

..media systems that are resilient to online disinformation are characterized by distinct structural features, such as a low degree of polarization and fragmentation; a low level of distrust in truth-seeking institutions that operate on reason and evidence (science, law, professionalism); a public health approach toward media regulation; and public funding for reliable truth-seeking media and an educated public.

More generally, resilience refers to a structural context in which disinformation does not reach a large number of citizens. At the same time, we argue that resilience is not only a consequence of simply not being exposed to disinformation. In countries that can be seen as resilient, people might also come across forms of disinformation. In those circumstances, people will be less inclined to support or further distribute such low quality information and, in some cases, they will be more able to counter that information.

In sum, we argue that resilience to online disinformation can be linked to structural factors related to different political, media, and economic environments.

Hybrid strategies are irregular techniques, such as soft propaganda, that aim to win over large portions of populations, as NATO Maj. Gen. Edvardas Mažeikis defined the term in 2017:

A comprehensive strategy to achieve (geo)political and strategic objectives based on a broad, complex, adaptive and often highly integrated combination of conventional and/or unconventional means, overt and/or covert activities, military, paramilitary, irregular and/or civilian actors, conducted across the full spectrum of elements of power (diplomatic/political, information, military, economic, financial, intelligence, legal – DIMEFIL) intended to create ambiguity and targeted at an adversary’s weaknesses and vulnerabilities. Hybrid strategies have a particular focus on decision-making process.

By removing the ability to critically examine at least some of the factors that leave countries vulnerable to hybrid attacks such as weaponized disinformation campaigns, the inauthentically organized anti-CRT push could also potentially leave large portions of the United States unguarded against still more manipulation by bad actors both domestic and foreign.

At the very least, the campaign around these concepts remove the public’s ability to have an honest conversation about critical race theory, its concepts, and its goals — which is exactly what the architects of this particular push openly stated they were trying to do.