Hulu deleted an episode of The Golden Girls because it involved blackface -- but the characters were in fact wearing mud masks.

On June 28 2020, Facebook user Matt Joseph shared the following post, which showed a BuzzFeed article (“An Episode Of “The Golden Girls” Was Pulled From Hulu For Featuring Blackface”) and a comment about how the decision was counterproductive: 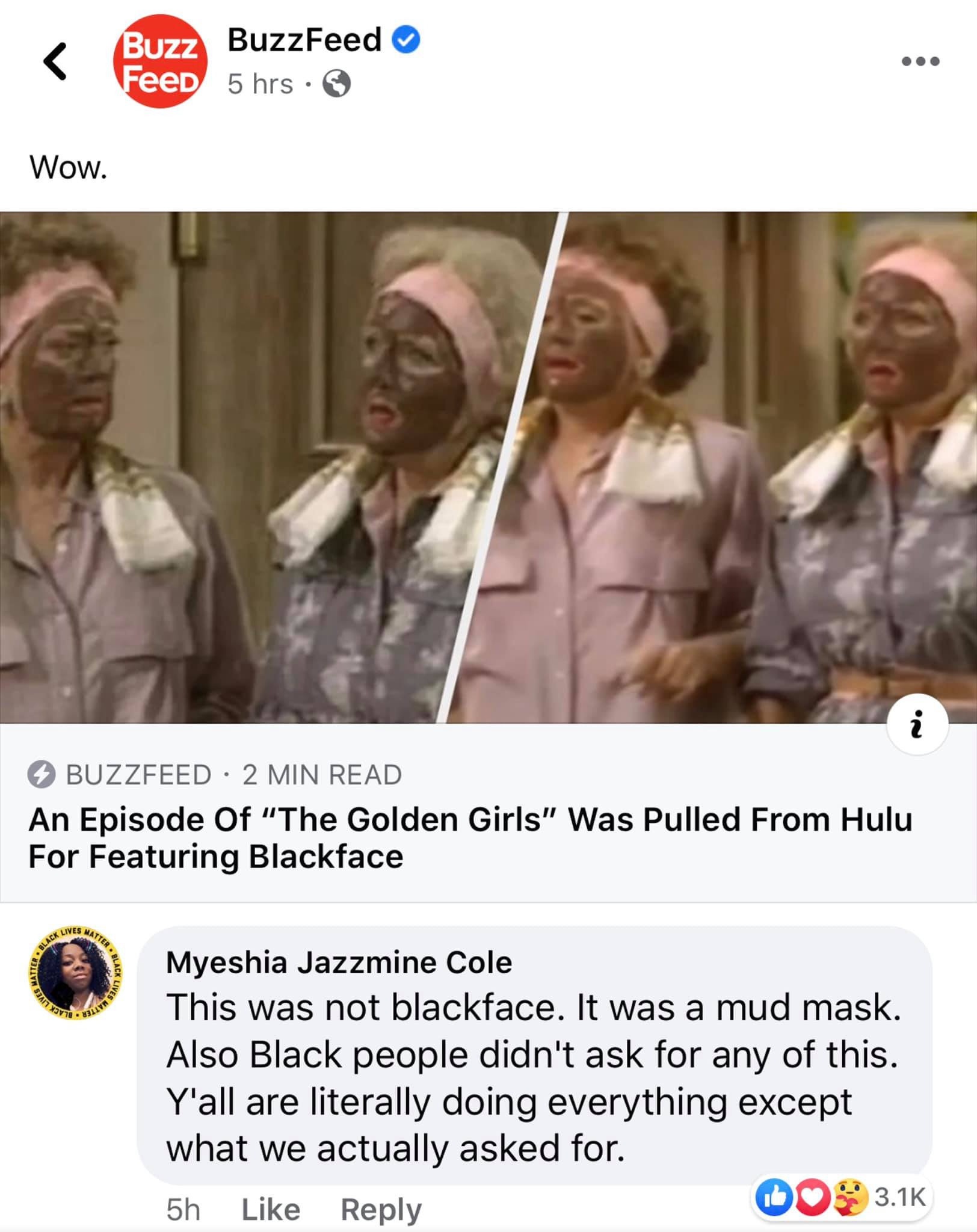 Contents of the Screenshot

This was not blackface. It was a mud mask. Also Black people didn’t ask for any of this. Y’all are literally doing everything except what we actually asked for.

Clearly, Cole’s comment resonated on the BuzzFeed thread itself. But when it was screenshotted and shared by a separate user, it topped 40,000 shares — signaling widespread agreement among the post’s sharers.

On June 27 2020, The Hollywood Reporter reported that episode referenced here involved “a scene in which Betty White and Rue McClanahan are mistaken for wearing blackface”:

“Mixed Feelings”, episode 23 in season 3 of the sitcom, aired in 1988 and shows Michael (Scott Jacoby), the son of Dorothy (Bea Arthur), planning to wed a much older Black woman, Lorraine (Rosalind Cash).

[Dorothy] is concerned over the age difference while Lorraine’s family disapproves of their daughter marrying a white man, and thus the two families attempt to end the marriage. In the episode, Lorraine’s family finds Rose (Betty White) and Blanche (Rue McClanahan) trying a new mud facial treatment, and as they greet their family, Rose says “This is mud on our faces, we’re not really Black.”

The episode was, in fact, titled “Mixed Blessing.” A Wikipedia page for the third season of The Golden Girls included a similar synopsis, explaining the reason White and McClanahan’s characters Rose and Blanche were wearing masks in the first place:

Dorothy’s son Michael plans to wed his older, African-American bandmate, Lorraine; they are 23 and 44, respectively. Dorothy complains of the age difference; Lorraine’s mother and aunts also disapprove, but mainly because Michael is white. The families agree to try to stop the wedding, only to learn the couple have eloped; upon the revelation that Lorraine is pregnant, the mothers agree they must pretend to be happy. Rose and Blanche try to beautify themselves for a romantic cruise with twin brothers. Guest stars: Scott Jacoby as Michael Zbornak; Rosalind Cash as Lorraine; Virginia Capers as Greta; Lynn Hamilton as Trudy; Montrose Hagins as Libby; Hartley Silver as Justice of the Peace. Note: This episode was pulled from the Hulu streaming site in 2020 due to a scene in which Betty White and Rue McClanahan appear in blackface.[

A June 29 2020 post on SlashFilm.com cited other, similar examples and posited that the move seemed a little hollow:

The removal of this Golden Girls episode comes on the heels of the similarly polarizing decision to remove an episode of Community that can’t really be categorized as blackface (dialogue in the scene clearly states that the character is dressed as a Dungeons & Dragons character, in a joke that could be construed as a jab at racial coding in the roleplaying game). With streamers taking the axe to episodes that could even be mistaken to be blackface, as seemingly innocent as they are, it points to a troubling trend that Hollywood is only playing defense on potential controversies and not properly addressing systemic racism in the industry. It’s disappointing, to be honest, and doesn’t actually add to the ongoing conversations about race and diversity.

That post included a still image from the removed Golden Girls episode: 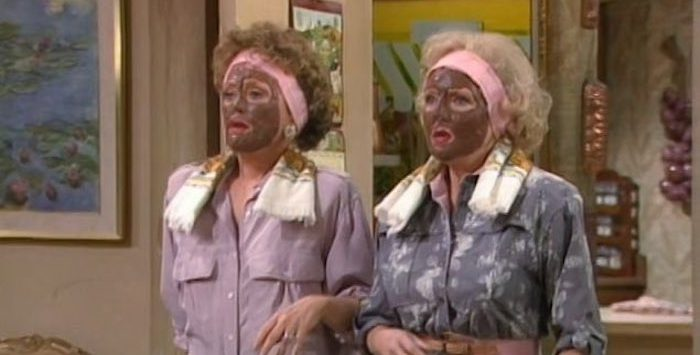 A version of the episode was available in full on YouTube here, starting just after the 12:30 mark.

During that portion of the episode, the family of Dorothy’s son’s girlfriend arrive at the characters’ home to meet Dorothy (Bea Arthur). Rose (Betty White) and Blanche (Rue McClanahan) enter the scene from the kitchen, wearing facial masks:

A flustered Rose then says: “This is mud on our faces … we’re not really black.”

We were unable to locate any official comment from Hulu about the removal of the episode, and it’s unclear how the decision became publicized.

That Golden Girls episode isn’t blackface. What the hell ?

Removing this episode is weird, counterproductive and stupid. It diminishes the effort to actually end racism. It’s just so dumb.

As did podcast host Erica Williams Simon, who described the decision as “symbolic,” an “overcorrection,” and one with little meaningful effects on the global discourse about racism:

To be clear: I’m not “attacking” Hulu. I would just hate for the seriousness of this moment and movement to get lost in symbolic (and sometimes silly) overcorrections. Impact on real lives should be the measure of any change worthy of a PR push.

Little to No Backlash Before the Removal, and the Earlier Discourse

A cursory search for whether anyone had ever complained about The Golden Girls “Mixed Blessings” episode turned up very little, and nothing current.

The scene was number five on a January 2018 Huffington Post listicle (“10 Times ‘The Golden Girls’ Was Totally Tone Deaf About Race”):

5. In season three, episode 23, Dorothy’s son Michael reveals he’s engaged to Lorraine, an older black woman who also happens to be pregnant. When Rose and Blanche first meet Lorraine’s relatives, they’re wearing facial masks that look a lot like blackface. The laugh track kicks in because, you know, blackface is so funny.

A more nuanced examination of the episode appeared in a 2016 academic paper titled “‘This is mud on our faces! We’re not really black!’ Teaching gender, race, and age through humour in The Golden Girls”:

The significance of context is best exemplified in a scene that appears mid-way through “Mixed Blessings.” Throughout the episode, Rose and Blanche use beauty regimens to prepare for a romantic cruise that they are going on with their boyfriends. When they walk out of the kitchen, Greta, her sisters, Lorraine, and Dorothy are all standing in the living room. At this point, Greta still believes Dorothy is the maid. Before Lorraine has the time to explain to her mother who Dorothy is, Blanche and Rose emerge from the kitchen with brown mud on their faces.

Greta: You must be Michael’s parents.

Lorraine: Mama, put your glasses on.

Greta (holding her glasses up to her eyes): Oh my Lord.

Rose (pointing at her face): This is mud on our faces. We’re not really black!

In this scene, the writers are harkening back to what was an incredibly popular 19th century tradition of blackface minstrelsy entertainment – where white actors painted their faces with “burnt cork or grease” and were dressed “outrageously” in “oversized and/or ragged ‘Negro’ costumes” to mock and produce racist caricatures of black people (Lott 1995, 3). This is an example that few students will be able to recognize immediately, since the characters themselves do not make overly explicit why the scene is additionally uncomfortable. The writer’s inclusion of the phrase “this is mud on our faces” points to the embarrassment of the characters and the racialized narrative of the scene. The explicit uncomfortability of this exchange creates teachable moments where we are able to go back to the scene to work through how this interaction could be read, what was implied by the language the characters used, and what it means in the larger conversation that the episode offers.

There were several true parts to the claim that Hulu removed The Golden Girls‘ Season Three episode “Mixed Blessings” in a larger controversy over blackface and racism in general. The episode was withdrawn from Hulu’s streaming platform on or about June 27 2020, the characters were wearing facial masks, and one of the characters verbally made an awkward remark about race. No one really seemed to be discussing the episode at all when it was removed, and one widespread opinion on the decision was exemplified in a CNN editorial remarking it was “easier to pull these episodes than to do the hard work of thinking through the embedded nature of black caricature and racism in popular culture, not just in the United States but around the world.”