Putative irregularities in a New Hampshire election audit indicated a nationwide pattern of fraud in the 2020 election.

In late May 2021, we spotted a number of “NH election audit” posts on social media (part of a larger narrative push around outcome of the 2020 election), including a May 25 2021 Facebook post on a known disinformation page, “ForAmerica”:

As many as 60% of ballots with machine-made or handmade folds were improperly counted by the town’s four scanning machines, Harri Hursti, one of three auditors selected for the process, told the New Hampshire Union Leader on Monday [May 24 2021].

That page was not the only site inauthentically driving interest into the New Hampshire election audit. On May 25 2021, the verified Facebook pages for fellow far-right disinformation purveyors, Western Journal and Conservative Tribune, shared links to a Western Journal article blaring the headline, “Trump Comments on Big News Emerging from Election Audit: ‘The Crime of the Century!'”

Neither site focused on New Hampshire, but instead redirected the framing to what former United States President Donald Trump was saying about the NH audit: 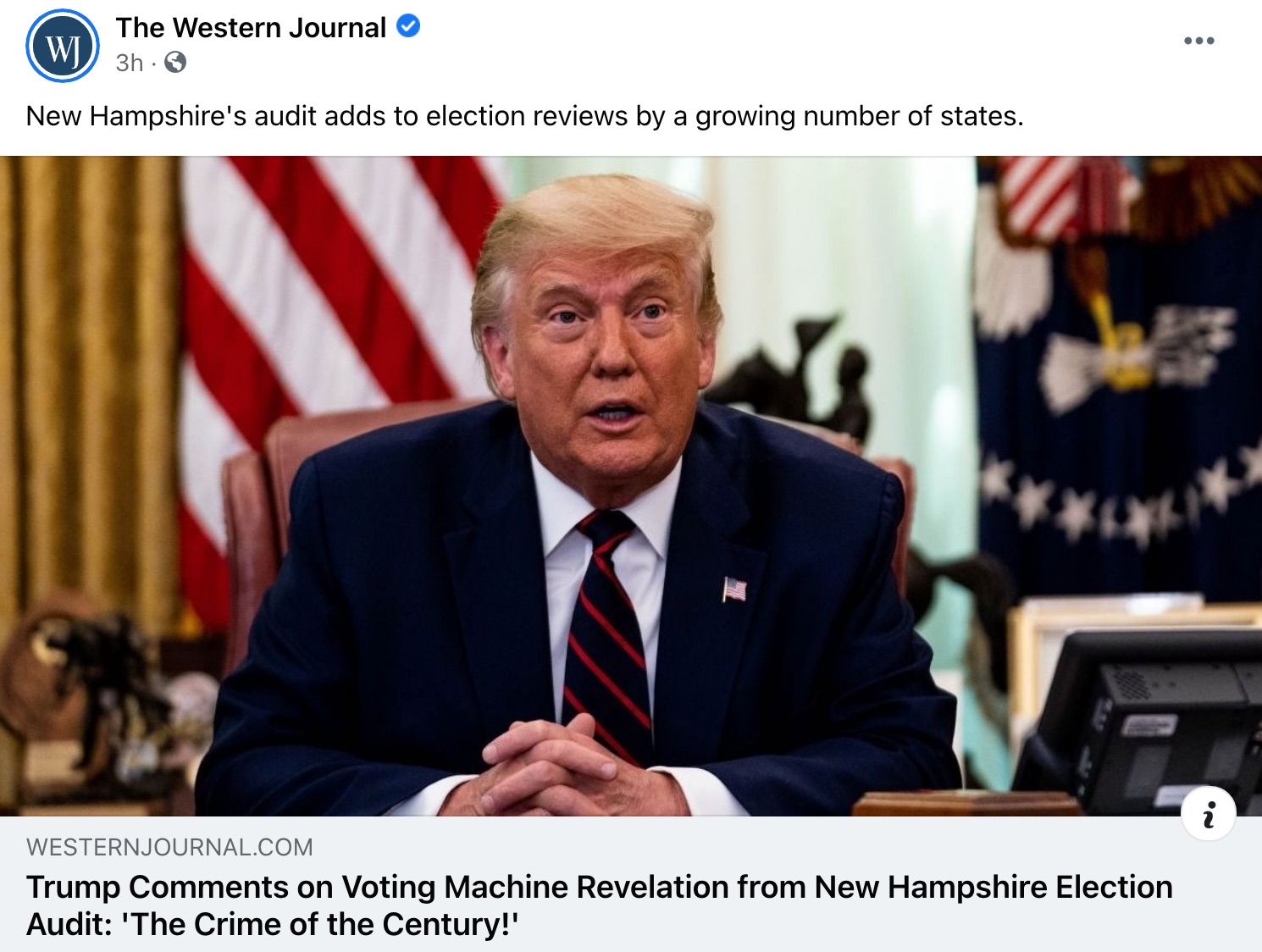 At 8:30 PM on May 24 2021, Trump shared a short post to his site, falsely suggesting that the events in New Hampshire were somehow relevant to his resounding loss to U.S. President Joe Biden in November 2020:

New Hampshire’s Election Audit has revealed that large-scale voting machines appear to count NON-EXISTING VOTES. State and local communities are seeking confirmation. It’s probably true, but we’ll soon know. Why aren’t Minority Leader Mitch McConnell and Republicans doing anything about what went on in the 2020 Election? How can the Democrats be allowed to get away with this? It will go down as the Crime of the Century! Other States like Arizona, Georgia (where a Judge just granted a motion to unseal and inspect ballots from the 2020 Election), Michigan, Pennsylvania, and more to follow.

Trump claimed that “large-scale voting machines” — apparently like those purportedly used in New Hampshire — appeared to count missing votes, that unspecified “states and local communities are seeking confirmation,” and that “it’s probably true.”

It is not currently clear how the NH election audit affected “states and local communities” that were said to be currently “seeking confirmation,” but Trump added that he considered “it,” whatever “it” was, to be the “Crime of the Century!”

In an apparent effort to launder this piece of propaganda from its origins, the “ForAmerica” Facebook post linked to a May 24 2021 WashingtonExaminer.com piece, “Windham 2020 election auditor says error rate ‘way higher than we expected,'” which began:

An auditor in Windham, New Hampshire, said the majority of ballots had a fold in them and are being reviewed through the town’s audit process investigating the 2020 election.

As many as 60% of ballots with machine-made or handmade folds were improperly counted by the town’s four scanning machines, Harri Hursti, one of three auditors selected for the process, told the New Hampshire Union Leader on Monday [May 24 2021].

“The error rate was way higher than we expected,” Hursti said.

WashingtonExaminer.com linked to a paywalled article published by a New Hampshire-based newspaper on May 24 2021, making it difficult for readers to click through to the source material and determine if the aggregated reporting at all resembled the original local news item. Initially, we were unable to access the New Hampshire Union Leader piece, but we found a reprint on Yahoo News.

The widely cited article from the New Hampshire Union Leader described the scope of the NH election audit — which had nothing to do with the general election at all, much less votes for Donald Trump.

Trump had claimed in his indifferently punctuated blog that “New Hampshire’s Election Audit has revealed that large-scale voting machines appear to count NON-EXISTING VOTES.” That claim was incongruent with the original, local reporting, which began:

As many as 60% of ballots with hand or machine-made folds were improperly read by the four AccuVote optical scanning machines used in Windham in the 2020 election cycle, a forensic audit team member said Monday.

“The error rate was way higher than we expected,” said Harri Hursti, one of the three auditors.

Hursti said analysis has shown automated voting machines misread these ballots and this could explain why the count was inaccurate for both Republican and Democratic candidates for state representative.

The New Hampshire Union Leader mentioned that “critics” seized upon the New Hampshire audit as evidence that the presidential election had been “tainted by inaccurate automated vote tallying,” but the story went on to describe a completely different situation in New Hampshire:

On Election Day, Republican Julius Soti finished fourth to take the last of four seats for state representative by 24 votes over Democrat Kristi St. Laurent. But Soti’s win grew to 420 votes after a Nov. 12 [2020] hand recount.

Hursti said the audit team has a theory for how the folds inflated St. Laurent’s total and undercounted the GOP votes that were actually cast.

If the folds went right through St. Laurent’s name on a ballot, the machine would read that as a vote. Should a voter then select all four Republican House candidates, the machine would consider the ballot an “over-vote” and would disqualify it from being counted … The audit team explained the automated machines can cause a fold in the ballots as they flip over inside and are deposited in a bin. Voters also must fold their absentee ballots to get them inside an envelope to send to the city or town clerk to be counted.

At the onset of the audit, the audit team and local election volunteers re-fed all 10,000 ballots through the Windham voting machines, and the outcome was much closer to the recount total than what had been reported on Election night.

In total, Republican candidates gained approximately 220 more votes after the audit (raising the total for one from 4,706 to 4,329), and a Democrat’s vote total dropped by “about 125” votes; using the lowest total of 4,326 against the highest discrepancy of 220 votes, the largest percentage difference was 5 percent.

Neither WashingtonExaminer.com nor Western Journal included additional comment by Hursti about what auditors believed caused the issue. However, the source article did. Hursti told local journalists that in this particular small election in New Hampshire, as with many other towns throughout the state, they used “one of the oldest models” of vote-counting machines to count ballots:

Hursti said this change was likely because all of these ballots had “been sitting flat” since the November election, which caused most of the folds to become less pronounced … The vote-counting machines used in Windham and about 85% of cities and towns in New Hampshire are one of the oldest models in circulation, with a memory chip that dates back to 1981, Hursti said.

While it’s outdated, Hursti said, the machine is harder to hack than more modern vote-counting machines because the paper ballots it counts provide backup.

The only mention of national-level disputes was a passing indicator that “critics” had set their sights on the small New Hampshire audit in order to feed a larger disinformation campaign alleging that the presidential results were not legitimate.

Another source for background about the NH election audit was NHPR, a local NPR affiliate. On May 5 2021, the station published a story (“What’s Happening With Windham’s Election Audit?”) which also clearly stated its limited scope:

Overall, the 2020 election went smoothly in New Hampshire — but there’s still one lingering question that hasn’t been answered: What happened with the vote totals in Windham’s state representative race? After a recount, an appeal to the Ballot Law Commission and months of discussions about who should investigate the issue, the state is one step closer to answering this question through its first post-election audit in recent memory — perhaps ever.

Why is this audit happening?

This all revolves around a single legislative race in Windham, a town of about 14,000 people near the Massachusetts border … Now, the audit is supposed to find out whether the town’s ballot counting machines functioned properly on Election Day. It’s also supposed to determine whether there were any differences between the number of ballots cast and counted in Windham on Election Day, and the number of ballots counted during the state’s recount.

NHPR also addressed the difference between recounts for close races and audits, describing the latter:

Audits, on the other hand, can take several different forms and aren’t necessarily tied to the outcome of a specific race — instead, the ultimate goal of audits, generally, is to confirm that the election system worked as it was supposed to. More than 34 other states routinely audit their election results, according to the National Conference on State Legislatures. New Hampshire does not have a system for post-election audits, though state officials are studying how they might work here in the future.

The story also clarified the identity and expertise of the widely-quoted Harri Hursti, a Finnish security expert:

The state’s chosen auditor is Harri Hursti, an election security expert and “ethical hacker” who is known for sounding alarms over security vulnerabilities in the U.S. voting systems.

Finally, the May 5 2021 pre-audit explainer addressed the elephant in the room — national attention on a small audit in order to lend unwarranted credence to a weaponized disinformation campaign in the service of a far right power grab — adding:

It seems like this is getting a lot of national attention. What’s going on there?

While there’s no evidence of fraud or tampering in Windham’s election, conspiracy theorists trying to sow doubt in the legitimacy of the 2020 presidential election have latched onto this local legislative race as evidence that the election was compromised in some way. That’s despite a lack of evidence that the issue in Windham is in any way systemic. Right-wing websites and commentators, including some with close ties to former President Trump, have been drumming up outrage over Windham and the process surrounding the audit in recent weeks.

NHPR’s most recent reporting as of May 25 2021 was a May 17 2021 update. That update indicated that the audit was in progress at press time:

Auditors have until May 27th the complete their work.

On Twitter, Hursti provided clinically phrased updates about the audit as it progressed, including a May 5 2021 retweet of an interview with WMUR, an April 26 2021 tweet critiquing efforts to audit election results in Arizona, and a March 22 2021 tweet referencing efforts by Sidney Powell to sow doubt about the 2020 general election:

So, she is now saying that no reasonable person would have not taken her claims seriously. So, was she trying to tell jokes? #ElectionSecurityhttps://t.co/Qqj94cYCoq

Six months after voters overwhelmingly rejected Donald Trump in the U.S. presidential election and four months after thousands of his supporters descended upon the United States Capitol in an attempted coup, Trump and his enablers continued to attempt to sow doubt around its outcome without any apparent attempts by social media platforms to curtail it.

Despite the fact that it was completely untrue and despite the vows made by social media platforms that they would crack down on weaponized disinformation campaigns, “ForAmerica” and other partisan Facebook pages freely spread claims that the NH election audit cast doubt on the 2020 general election, linking to local reports behind a paywall and selectively quoting those sources.

An array of local reports, comments made by auditors, and details about the reason for and mechanism of the audit undercut the claims and insinuations made by Donald Trump and other right-wing propagandists that the New Hampshire election audit was in any way related to or indicative of irregularities in the 2020 general election.