In December 2021, Newsmax published a "Vlad the Great" cover story.

On December 7 and 8 2021, a Newsmax “Vlad the Great” cover photograph circulated on social media platforms like Imgur and Twitter:

For anyone who thinks Newsmax is anything but Russian disinformation, here is the cover of Newsmax Magazine’s December issue. Hundreds of thousands of MAGAs get their news from Putin every day. pic.twitter.com/87KVrX9FE6

The full image can be viewed without Twitter cropping here: 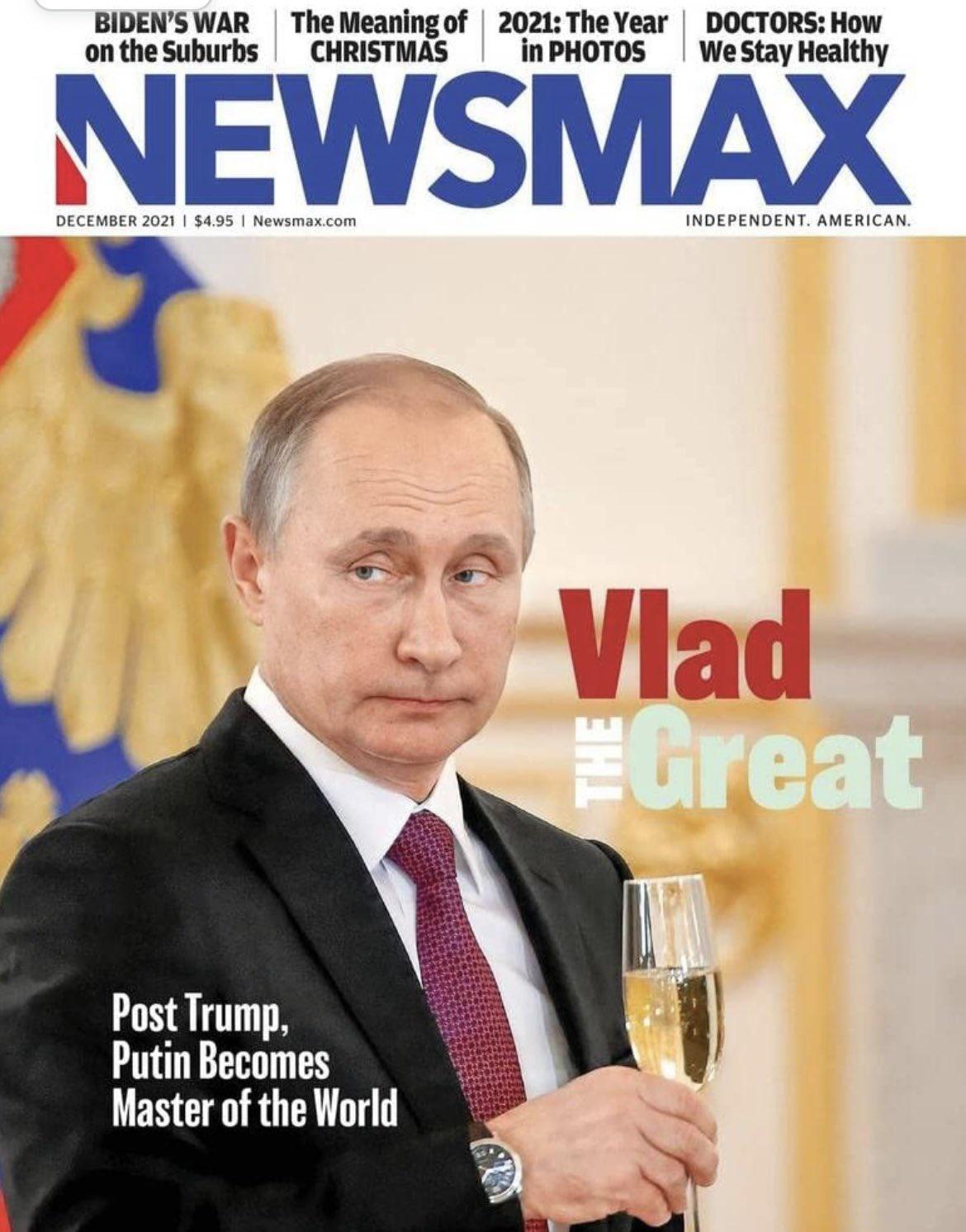 In the above image, the “Newsmax” title was visible, alongside a “December 2021” date. Smaller feature titles such as “Biden’s war on the suburbs” and “The meaning of Christmas” were visible at the top, and a large image of Russian President Vladimir Putin drinking champagne appeared at the bottom.

Text on that image read:

Neither iteration included a link to the source of the image, and a Google search for “Vlad the Great” on Newsmax’s website returned no results. On shop.newsmax.com, a product page for a magazine subscription did not feature the “Vlad the Great” cover, and an internal search for “Putin” did not return any such content.

Google Trends demonstrated significant search interest between December 7 and 8 2021 for the following terms (most of which involved “Breakout” search levels):

A separate search of all sites in the thirty-day period ending December 8 2021 turned up an Amazon listing for Newsmax magazine. That product page appeared to have been updated with the December 2021 edition of Newsmax magazine, displaying the “Vlad the Great” cover:

Much of the confusion around the image’s legitimacy stemmed from the fact that it was content reserved for paying print subscribers. After a bit of digging, we found a version published to Newsmax.com.

That page didn’t include the actual content of the “Vlad the Great” feature, but it read in part:

Putin’s War on The West

The Russian leader exploits every opportunity to weaken the U.S. and its allies.

He’s evil, he’s cunning, and he’s the most powerful man in the world.

And now, the December [2021] issue of Newsmax Magazine takes you into the secretive, sordid, and sometimes frightening world of the man who’ll stop at nothing to get what he wants — Russian President Vladimir Putin.

In our explosive cover story, “Vlad the Great: Putin’s War on the West,” investigative reporter and bestselling author Kenneth R. Timmerman explores Putin’s beginnings and his goal of exploiting every opportunity to weaken the United States and its allies.

From his days as a cutthroat KGB spy stationed in East Germany to his power-hungry ascension to the presidency of Russia, Putin has given the U.S. and the world unending headaches with his nonstop amassing of nuclear weapons, incessant saber-rattling, and deadly espionage plots.

The iron-fisted tyrant kills his enemies without remorse, invades surrounding regions such as Crimea and Georgia, and works 24/7 to shut down America via sophisticated cyberattacks.

Per the outlet itself, Newsmax’s “Vlad the Great” cover (and attendant feature story) appeared in its December 2021 feature edition. In a statement published to Newsmax.com, the piece purportedly described Putin as “evil,” “the most powerful man in the world,” and endeavoring “24/7 to shut down America via sophisticated cyberattacks.”