A June 2021 Facebook “historical facts” meme included imagery of the United States’ Founding Fathers, alongside other claims about when the country adopted specific acts of public patriotism: 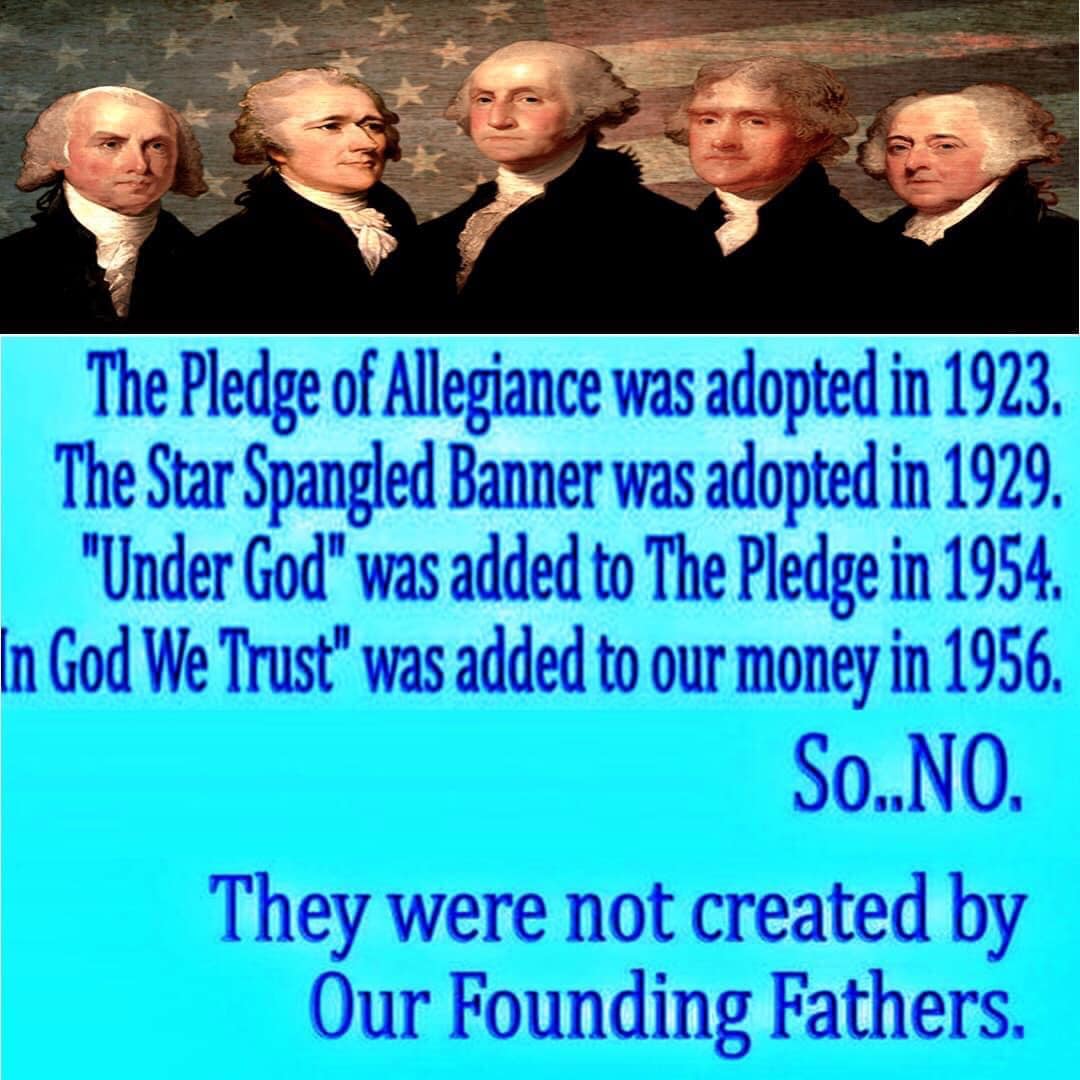 The text at the bottom of the meme addressed the Pledge of Allegiance, the Star Spangled Banner, “Under God,” and “In God We Trust.” It read:

They were not created by our Founding Fathers.

Although the meme included no citation, its claims were year-specific and fairly straightforward to check.

‘The Pledge of Allegiance Was Adopted in 1923’

When did Americans start reciting the Pledge of Allegiance routinely?

According to the meme, that occurred in 1923 — but no details about how that happened followed. A September 2015 SmithsonianMag.com article, “How the Pledge of Allegiance Went From PR Gimmick to Patriotic Vow,” traced its origins back a bit further.

However, the article did not cover any watershed moment in 1923, instead pointing to a number of points in history where its recitation became more common:

On the morning of October 21, 1892, children at schools across the country rose to their feet, faced a newly installed American flag and, for the first time, recited 23 words written by a man that few people today can name. “I pledge allegiance to my Flag and to the Republic for which it stands—one nation indivisible—with liberty and justice for all.”

Francis Bellamy reportedly wrote the Pledge of Allegiance in two hours, but it was the culmination of nearly two years of work at the Youth’s Companion, the country’s largest circulation magazine … Bellamy, a former Baptist preacher, had irritated his Boston Brahmin flock with his socialist ideas. But as a writer and publicist at the Companion, he let ’em rip. In a series of speeches and editorials that were equal parts marketing, political theory and racism, he argued that Gilded Age capitalism, along with “every alien immigrant of inferior race,” eroded traditional values, and that pledging allegiance would ensure “that the distinctive principles of true Americanism will not perish as long as free, public education endures.”

The pledge itself would prove malleable, and by World War II [1939] many public schools required a morning recitation.

In that article, “1923” only appeared once, in its final paragraph:

Bellamy did some transcending of his own. The onetime committed socialist went on to enjoy a lucrative career as a New York City advertising man, penning odes to Westinghouse and Allied Chemical and a book called Effective Magazine Advertising. But his favorite bit of copy remained the pledge—“this little formula,” he wrote in 1923, with an ad man’s faith in sloganeering, which “has been pounding away on the impressionable minds of children for a generation.”

The meme’s reference to 1923 was not entirely unmoored; there was a “National Flag Conference” during that year — against a backdrop of growing nationalism and jingoism and rising anti-immigrant propaganda.

According to the American Legion:

In June 1923, the Americanism Commission called the first National Flag Conference in Washington. There, representatives from the Legion, Daughters of the American Revolution, the Boy Scouts, Knights of Columbus, the American Library Association, and more than 60 other patriotic, fraternal, civic and military organizations gathered to draw together one standard set of guidelines relating to the flag from the many traditions and variations rampant in the country at that time. President Warren G. Harding addressed attendees. A second National Flag Conference was held in June 1924. After both conferences, the Legion printed and distributed the results nationwide.

An old, archived copy of a 2002 PBS story originally cited referenced a discussion revolving around the separation of church and state, and included a “Pledge Timeline”:

Although the meme claimed the Pledge of Allegiance was not adopted until 1923, it appeared that the Pledge was “formally” adopted two decades later, during another wave of nationalistic patriotism, in 1942.

‘The Star Spangled Banner Was Adopted in 1929’

Per the meme, the United States’ national anthem, the Star Spangled Banner, was adopted in 1929.

Once again, the primary dates associated with the official adoption of that particular composition were not entirely exact. A History.com “This Day in History” entry for March 3 2010 said of the Star Spangled Banner’s adoption:

After circulating as a handbill, the patriotic lyrics were published in a Baltimore newspaper on September 20, 1814. Key’s words were later set to the tune of “To Anacreon in Heaven,” a popular English song. Throughout the 19th century, “The Star-Spangled Banner” was regarded as the national anthem by most branches of the U.S. armed forces and other groups, but it was not until 1916, and the signing of an executive order by President Woodrow Wilson, that it was formally designated as such. In March 1931, Congress passed an act confirming Wilson’s presidential order, and on March 3 President Hoover signed it into law.

That particular accounting provided two years during which the United States’ national anthem was adopted, and neither were in 1929. In 1916, President Woodrow Wilson issued an executive order to formally designate it.

Previously cited material touched on the fact that the Pledge of Allegiance’s original phrasing did not contain “Under God.” So when (and why) was “Under God” edited into the fairly novel practice of swearing allegiance to the American Flag?

An undated document titled “Pledge of Allegiance” on the Department of Veterans’ Affairs VA.gov [PDF] explained:

The words “my flag” were replaced by “the flag of the United States” in 1923, because some foreign-born people might have in mind the flag of the country of their birth, instead of the U.S. flag. A year later, “of America” was added after “United States.” No form of the pledge received official recognition by Congress until June 22, 1942, when it was formally included in the U.S. Flag Code. The official name of The Pledge of Allegiance was adopted in 1945. The last change in language came on Flag Day 1954, when Congress passed a law which added the words “under God” after “one nation.”

A September 2013 “Five Facts” listicle by Pew Research addressed why “Under God” was added to the Pledge of Allegiance in 1954:

Congress added “Under God” to the Pledge in 1954 – during the Cold War. Many members of Congress reportedly wanted to emphasize the distinctions between the United States and the officially atheistic Soviet Union.

Nevertheless, we were able to pin down the year of the addition of “Under God” to the Pledge of Allegiance, and it did in fact occur neatly in the confines of 1954.

An undated page published by the United States Treasury, “History of ‘In God We Trust,'” placed the earliest connection between the phrase and currency in the mid-19th century:

It was found that the Act of Congress dated January 18, 1837, prescribed the mottoes and devices that should be placed upon the coins of the United States. This meant that the mint could make no changes without the enactment of additional legislation by the Congress. In December 1863, the Director of the Mint submitted designs for new one-cent coin, two-cent coin, and three-cent coin to Secretary Chase for approval. He proposed that upon the designs either OUR COUNTRY; OUR GOD or GOD, OUR TRUST should appear as a motto on the coins … The Congress passed the Act of April 22, 1864. This legislation changed the composition of the one-cent coin and authorized the minting of the two-cent coin. The Mint Director was directed to develop the designs for these coins for final approval of the Secretary. IN GOD WE TRUST first appeared on the 1864 two-cent coin.

That entry addressed an ebb and flow of interest into usage of “In God We Trust” on currency:

The use of IN GOD WE TRUST has not been uninterrupted. The motto disappeared from the five-cent coin in 1883, and did not reappear until production of the Jefferson nickel began in 1938. Since 1938, all United States coins bear the inscription. Later, the motto was found missing from the new design of the double-eagle gold coin and the eagle gold coin shortly after they appeared in 1907. In response to a general demand, Congress ordered it restored, and the Act of May 18, 1908, made it mandatory on all coins upon which it had previously appeared. IN GOD WE TRUST was not mandatory on the one-cent coin and five-cent coin. It could be placed on them by the Secretary or the Mint Director with the Secretary’s approval.

According to the Treasury, “In God We Trust” arguably was added in 1864 when it first appeared on the 1864 two-cent coin. One could also tack the date to 1938, after which point all United States coins had it.

But memes don’t allow for lengthy explanations, and perhaps the meme maker intended “our money” to describe “paper currency.” A subsequent section explained:

A law passed by the 84th Congress (P.L. 84-140) and approved by the President on July 30, 1956, the President approved a Joint Resolution of the 84th Congress, declaring IN GOD WE TRUST the national motto of the United States. IN GOD WE TRUST was first used on paper money in 1957, when it appeared on the one-dollar silver certificate. The first paper currency bearing the motto entered circulation on October 1, 1957. The Bureau of Engraving and Printing (BEP) was converting to the dry intaglio printing process. During this conversion, it gradually included IN GOD WE TRUST in the back design of all classes and denominations of currency.

The U.S. Currency Education Program (CEP)’s “The History of U.S. Currency” page provided a succinct answer to the question:

“In God We Trust”

Following a 1955 law requiring “In God We Trust” on all currency, the motto first appears on banknotes on series 1957 $1 silver certificates, then on 1963 series Federal Reserve notes.

CEP marked 1956 as the year in which “In God We Trust” was officially added to American paper currency, following the passage of a 1955 law. Banknotes bearing the newly-adopted motto began circulating in 1957, and were introduced through 1966.

A circulating meme broadly stated that the Founding Fathers did not “create” the four things listed. It asserted the “Pledge of Allegiance was adopted in 1923,” the “Star Spangled Banner was adopted in 1929,” “‘Under God’ was added to the Pledge in 1954,” and “‘In God We Trust’ was added to our money in 1956.” The meme’s veracity was mixed in that respect, although it was true none of the things listed could be fairly associated with the Founding Fathers’ actions. The Pledge of Allegiance was adopted in 1942, and the Star Spangled Banner was formally adopted between 1916 and 1931. “Under God” was indeed officially added to the Pledge in 1954, but “In God We Trust” first appeared on currency as early as 1864. A 1955 law affected paper currency, where “In God We Trust” entered circulation in 1957.