Mathematical percentages are reversible assuming the numbers involved in each equation are kept the same.

In January 2020, some users on Reddit and Facebook found themselves stunned to discover an application for the commutative property of multiplication for determining percentages.

The post appears to have originated on Reddit, as part of a discussion spanning more than 21,000 comments asking:

What’s a little-known but obvious fact that will immediately make all of us feel stupid?

Percentages are reversible. 8 percent of 25 is the same as 25 percent of 8 and one of them is much easier to do in your head. 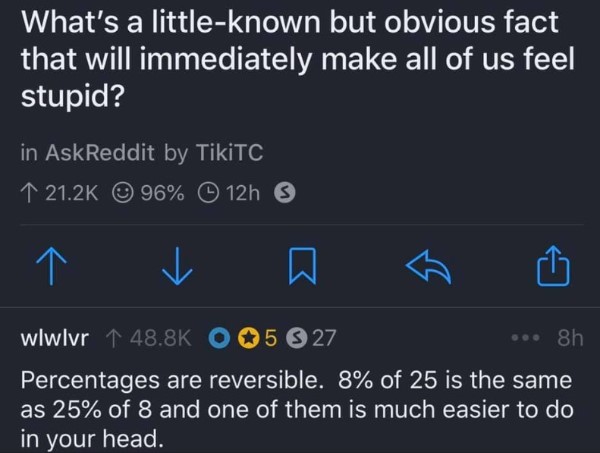 In this case, both equations come to the same result — two. One commenter broke the equation down in the same thread:

According to the commutative property, changing the order of the numbers in a multiplicative equation does not change the end product:

“This is the only fact I’ve read here that made me feel like an idiot,” another Reddit user wrote. “Thanks, actually really useful.”