completely normal baseball price, $85 was just too low, but $90 was just too much 🙂 nothing weird about it pic.twitter.com/UvyunMnsOL

Alongside a screenshot of the purported $88 baseball inscribed with “Trump,” @KingK4hn wrote:

Half the people here get that 88 is a nazi dogwhistle

It is well established that the number “88” is a hate symbol. In its Hate Symbols Database, the Anti-Defamation League (ADL) explains:

88 is a white supremacist numerical code for “Heil Hitler.” H is the eighth letter of the alphabet, so 88 = HH = Heil Hitler. One of the most common white supremacist symbols, 88 is used throughout the entire white supremacist movement, not just neo-Nazis. One can find it as a tattoo or graphic symbol; as part of the name of a group, publication or website; or as part of a screenname or e-mail address. It is even sometimes used as a greeting or sign-off (particularly in messages on social networking websites).

Although the ADL added that it “should be noted that 88 can be found in non-extremist contexts,” the organization also alluded to its use as a dogwhistle. A dogwhistle, in this instance, involves employing the use of coded signals to appeal to white supremacists:

Dog whistle is a type of strategy of communication that sends a message that the general population will take a certain meaning from, but a certain group that is “in the know” will take away the secret, intended message. Often involves code words.

It’s a home run with our classic leather baseball. Hand stitched with a nostalgic design, our Trump Baseball will take you back to long summers. Display as the centerpiece of your collection or purchase for someone special. 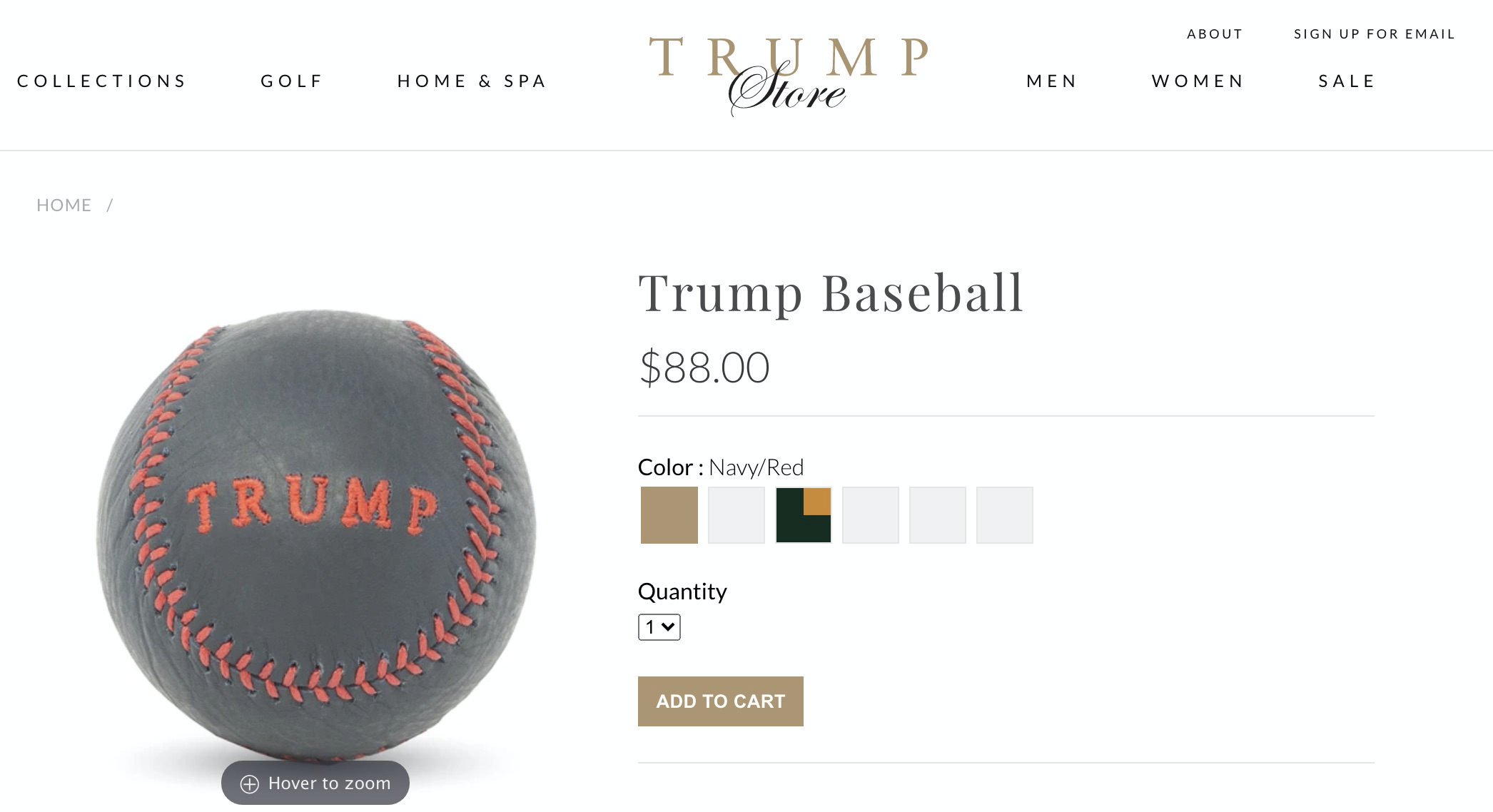 The listing is archived here.

TrumpStore.com maintained an “About” page, directing visitors to visit its “flagship retail store” in Trump Tower, and reading:

Welcome to TrumpStore.com, the official retail website of The Trump Organization. We are thrilled to offer the very latest in Trump branded merchandise, apparel, headwear, gifts and much more!

Inspired by our portfolio of the finest golf, hotel and residential properties in the world, you can now shop the official Trump Collection online.

Visit us to learn more our about upcoming product offerings and experience the very best from our retail shops across the globe.

We look forward to sharing exciting collaborations and exclusive special collections. Welcome to the World of Trump!

The Trump Organization’s TrumpStore.com (which maintained a retail presence in Trump Tower) has a live listing for a baseball priced at $88. The number 88 is a well-known extremist symbol, used by white supremacists to signal others with similar beliefs.