On October 18th, 2018, United States President Donald Trump fired off a volley of tweets about a large caravan of people wending their way from Honduras to the southern United States border: 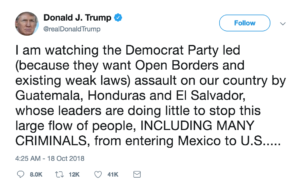 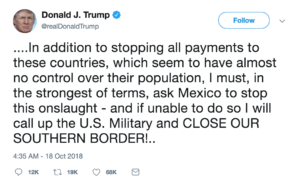 These statements were duly picked up and breathlessly repeated by news channels and pundits, spreading the story with crucial context omitted from the story, such as who the people traveling to the United States are and what they actually want. Trump repeated some of these claims in his February 5 2019 State of the Union address, once again sparking interest in the event.

The truth is that these caravans have taken place on a yearly basis for many years (sometimes called the Caravana del Migrante or the Viacrucis del Migrante) and they are always well-publicized in Spanish-language and some English-language media, because its participants want the world to see their journey and understand why they choose to leave their homes and undertake physically arduous and perilous journeys.

The caravans generally start around Easter in order to represent Jesus Christ’s Biblical journey to be crucified (hence the name “via crucis,” which means “the way of the cross” or, more figuratively, “the path of suffering.”) Some caravans have a theme, such as the high rate of brutal murders of women in countries all over the world (2016) or people who are “disappeared” by corrupt states (2012), but in every case they are a last-ditch effort for individuals and families to escape endemic violence in their home countries while bringing attention to their plight:

The caravan was organized in part by a former Honduran lawmaker named Bartolo Fuentes. Fuentes had been posting Facebook Live videos along the way, talking about the bloodshed and hunger the people are fleeing.

“They don’t go because they want to, they go because they have to,” Fuentes said. “Sirs of the government and sirs of the U.S., be reasonable. Use your head. Your repressive actions are not going to stop people. The reasons they’re leaving are more powerful than all the risks.”

However, the story took another turn when Fuentes’s account was discovered to have been run by an imposter who was putting out inflammatory disinformation to encourage more and more people to join the caravan before mysteriously disappearing; Facebook has not yet commented on the false account:

Bartolo Fuentes, a Honduran activist, journalist, and former lawmaker told BuzzFeed News that someone used the phony account to send Facebook messages falsely claiming that established migrant groups were organizing the effort. News like that — coming from a well-known public figure in Honduras, such as Fuentes — could go a long way to convincing people to join the group of migrants traveling to the US.

The caravan, which threaded north through Guatemala and Mexico, eventually ballooned in size to more than 7,000 people. It also became a political flashpoint in the lead-up to last month’s US midterm elections.

In response to a query from BuzzFeed News, a Facebook spokesperson said the phony account “was removed for violating [the company’s] misrepresentation policy,” but declined to share any further information, such as what country it originated from, what email address was used to open it, or any other details that might reveal who was behind it. Facebook added that, barring a subpoena or request from law enforcement, it does not share such information out of respect for the privacy of its users.

Fuentes said he believes it’s important to find out who was behind the rogue account — but hasn’t gotten any answers from Facebook. “Who knows how many messages could have been sent and who received them?”

When participants reach the border of the United States, they plan not to “storm” the border wall or cause violence, but instead they hope to turn themselves in to border authorities en masse and request asylum, just as they have in preceding years — because non-citizens have to already be within the borders of the United States or at a port of entry in order to do so, per U.S. Citizenship and Immigration Services:

Refugee status is a form of protection that may be granted to people who meet the definition of refugee and who are of special humanitarian concern to the United States. Refugees are generally people outside of their country who are unable or unwilling to return home because they fear serious harm. For a legal definition of refugee, see section 101(a)(42) of the Immigration and Nationality Act (INA).

You may seek a referral for refugee status only from outside of the United States. For more information about refugees, see the Refugees section.

Asylum status is a form of protection available to people who:

-Meet the definition of refugee

-Are already in the United States

-Are seeking admission at a port of entry

It is worth noting here that Trump’s “family separation” policy was, and is, used against families turning themselves in to authorities to request asylum — which means that families are still being held without charge for participating in an act that is, as USCIS clearly notes, entirely legal by both international and American standards.

Rep. Matt Gaetz (R-Florida), who is perhaps best known for inviting a Holocaust denier to the State of the Union address, added another paranoid spin to the already off-kilter national commentary when he accused Hungarian-American billionaire philanthropist and favorite right-wing bugaboo George Soros of funding the caravans: 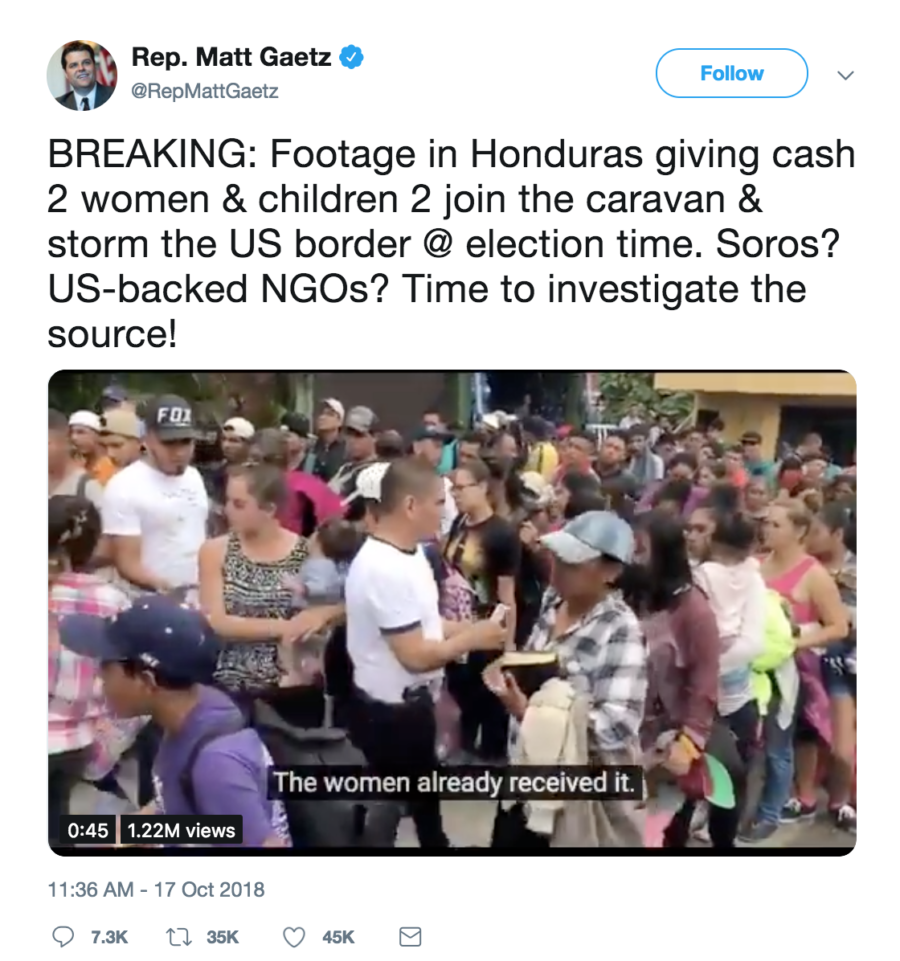 That his accusation came with no supporting evidence at all didn’t deter the usual disinformation purveyors like WesternJournal.com from adding to the baseless speculation, even as the site admitted it had no idea what Gaetz was actually talking about:

Information was not immediately available regarding where the video came from or what, precisely, it showed. More than 15,000 Twitter users responded to the post online, and the comments about the video were overwhelmingly against illegal immigration.

While many details about the clip are still missing, Gaetz’s allegation would have serious implications if it is accurate. A scheme that paid poor Central American citizens to leave their country and march toward the U.S. border would help explain the speed at which the latest caravan has grown in size.

The video actually shows a scene outside a shelter in Chiquimula, Guatemala, not Honduras, where a group of people with babies and small children changed their money from Honduran to Guatemalan currency so that they could take buses to keep up with the rest of the caravan:

No George Soros was in sight. However, Pueblo Sin Fronteras (a volunteer group that helps organize the journeys) is now warning Hondurans that there should be no more caravans for now, because the risks have become too great.