During a lunar eclipse on June 4 2020, lightning struck the Washington Monument in a fashion visually similar to the ominous "Tower" tarot card.

During ongoing protests against police brutality and a lunar eclipse on June 5 2020, numerous posts on Facebook asserted that the Washington Monument had been struck by lightning — many of those claims appearing alongside an image of the “Tower” tarot card. 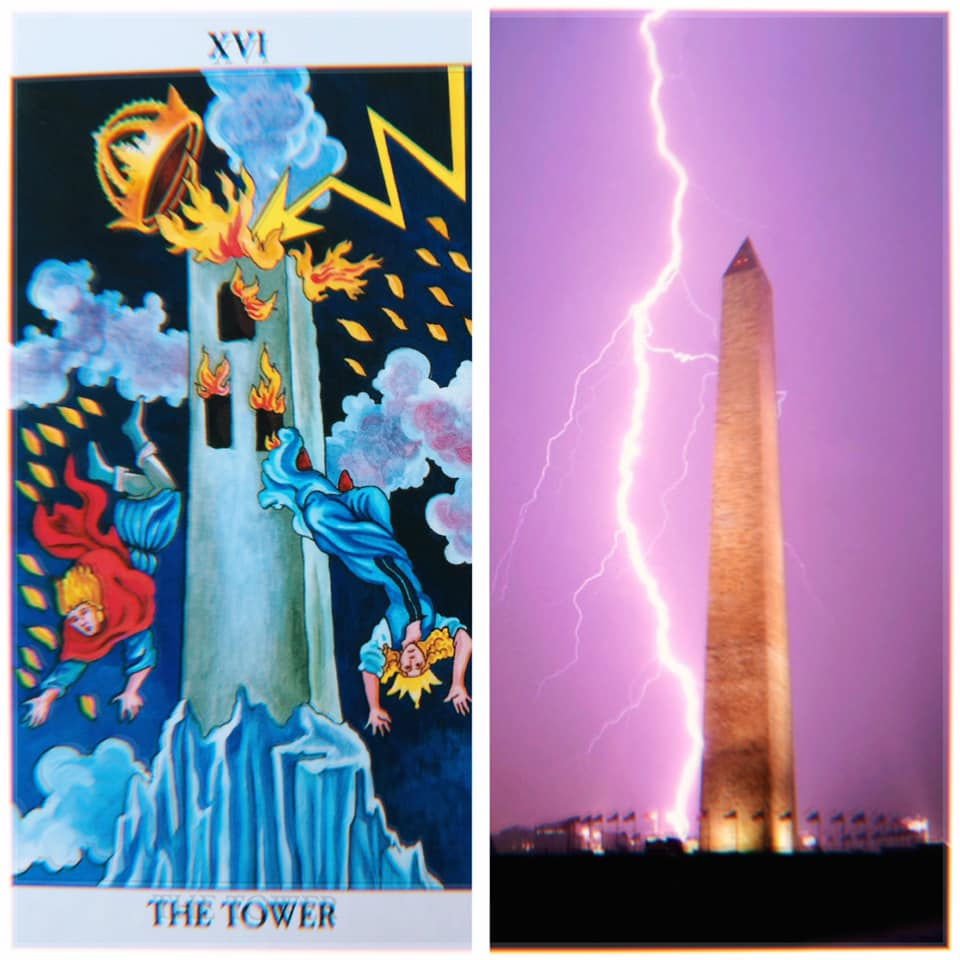 The Washington Monument was hit by lightning the other night, on the Full Moon Lunar Eclipse. I’ve been thinking about the Tower card ever since! 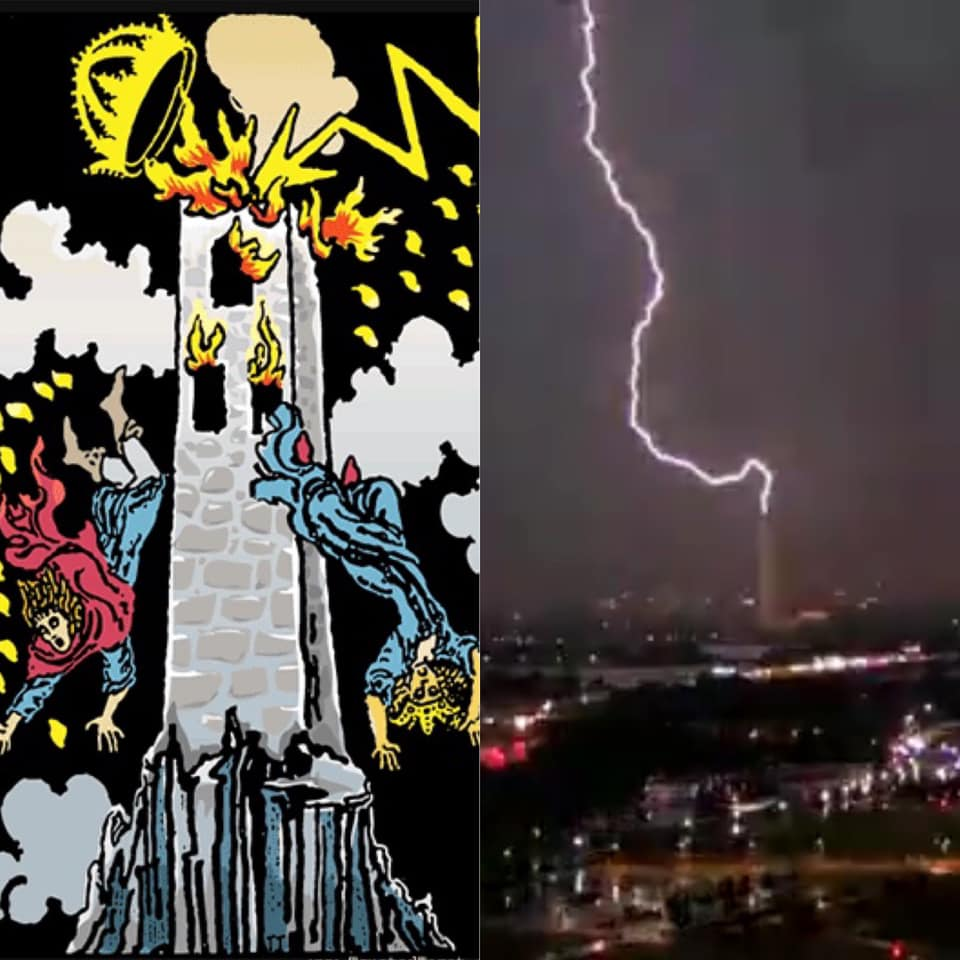 Accuracy of Washington Monument Images in Some Versions of the Rumor

To clarify, not all the images shown of the Washington Monument were from June 2020. At least one circulating photograph appeared on the internet as early as 2013: 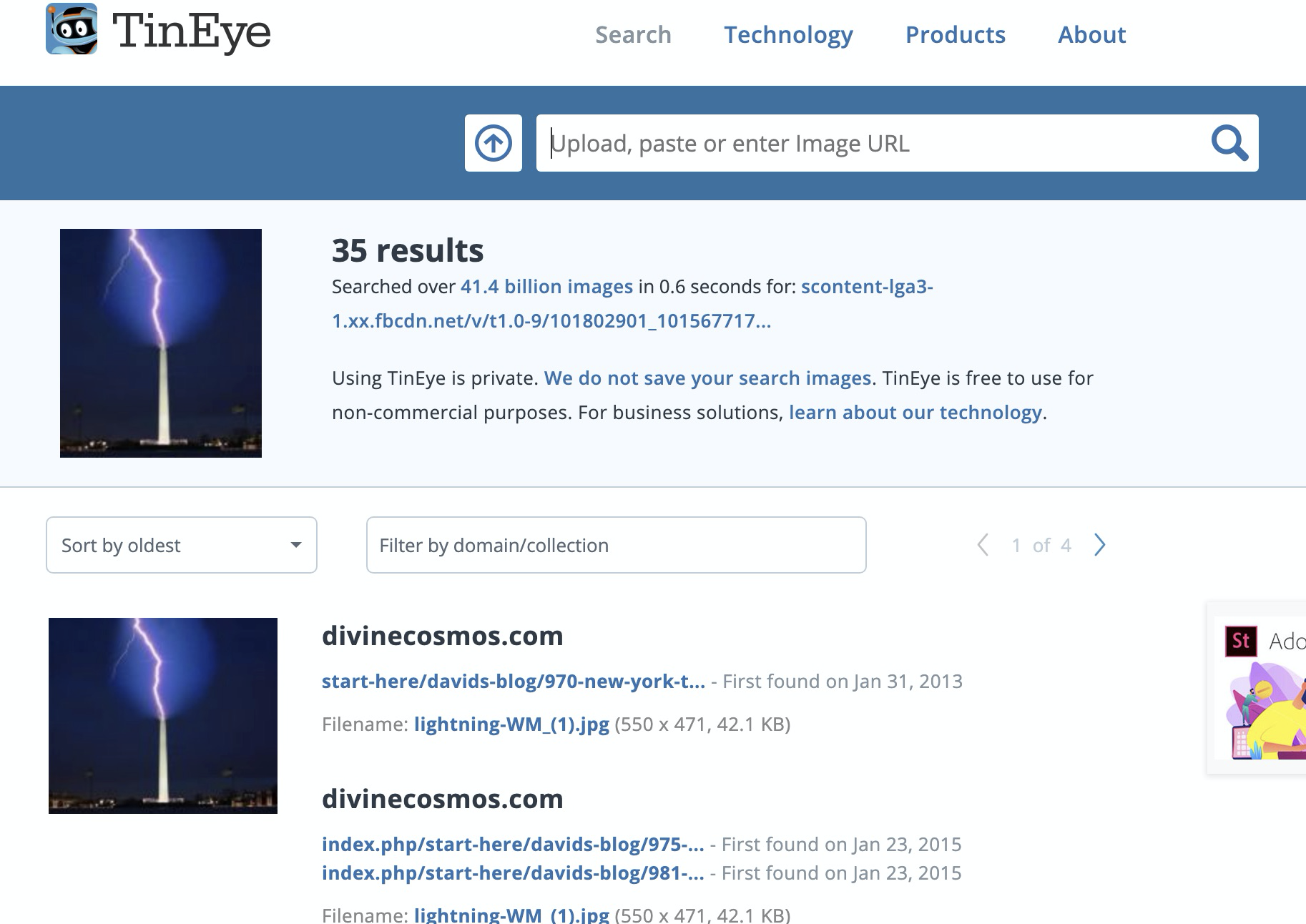 Timing of the Lightning Strike

Social media posts quoted above occasionally said the Washington Monument was struck by lightning during the “full lunar eclipse,” which took place on June 5 2020:

Sharp-eyed skywatchers in parts of the world may be able to catch a slight lunar eclipse today (June 5 [2020]) as Earth embarks on a new “eclipse season,” although North American viewers will be out of luck

Today’s eclipse will be what astronomers dub a “penumbral eclipse,” which occurs when the outer ring of Earth’s shadow just grazes the moon. (During a partial eclipse, the moon falls somewhat into Earth’s inner shadow; during a total lunar eclipse it falls entirely into that inner shadow.)

But it will take a keen eye indeed to notice the penumbral darkening, which will just tint the lower edge of the moon at the midpoint of the eclipse.

The eclipse will also be geographically limited, visible only over central and east Africa, Eastern Europe, western and central Asia, and parts of Indonesia and Australia. It will begin at 1:45 p.m. EDT (1745 GMT) and end at 5:04 p.m. EDT (2104 GMT), according to a NASA chart.

Other posts placed the timing of the lightning strike on June 4 2020.

In most standard tarot card decks, the “Tower” card is one of 21 cards in the major arcana. The card itself is often seen as ominous or alarming, representing often painful upheaval and ushering in major change. Like all cards used in the tarot form of divination, the card has different meanings depending on whether it is drawn oriented normally (“upright”), or upside-down (“reversed”):

The card itself does depict an obelisk or tower like the Washington Monument, a lightning bolt, and frequently people falling from the top of the tower itself. One description of the card’s visual elements and its meanings says of when the card is drawn upright:

When the Tower card appears in a Tarot reading, expect the unexpected – massive change, upheaval, destruction and chaos. It may be a divorce, death of a loved one, financial failure, health problems, natural disaster, job loss or any event that shakes you to your core, affecting you spiritually, mentally and physically. There’s no escaping it. Change is here to tear things up, create chaos and destroy everything in its path (but trust me, it’s for your Highest Good).

Just when you think you’re safe and comfortable, a Tower moment hits and throws you for a loop. A lightning bolt of clarity and insight cuts through the lies and illusions you have been telling yourself, and now the truth comes to light. Your world may come crashing down before you, in ways you could never have imagined as you realise that you have been building your life on unstable foundations – false assumptions, mistruths, illusions, blatant lies, and so on. Everything you thought to be true has turned on its head. You are now questioning what is real and what is not; what you can rely upon and what you cannot trust. This can be very confusing and disorienting, especially when your core belief systems are challenged. But over time, you will come to see that your original beliefs were built on a false understanding, and your new belief systems are more representative of reality.

It was true lightning struck the Washington Monument after nightfall — on June 4 2020, not June 5:

😱 WOAH! Look at this lightning caught on video by Sky9! 😱 https://t.co/sTN1eCtqfB pic.twitter.com/EptFQpR8ub

In the video above, the Monument’s obelisk was hit by one of several depicted lightning bolts. On June 5 2020, USA Today reported that there had been several lightning strikes on the night of June 4 2020, and two National Guard members were hospitalized after being injured in a separate strike:

Two National Guardsmen deployed to Washington D.C. due to protests were injured in a lightning strike during severe storms Thursday night into early Friday [June 4 and 5 2020], hours after an initial bolt struck the Washington Monument.

“We received a call around midnight informing us that two military personnel had been injured in a lightning strike,” D.C. Fire and Emergency Medical Services Department Public Information Officer Vito Maggiolo told USA TODAY. “We responded and the two individuals were transported to a hospital with non-life-threatening injuries.”

Maggiolo said the guardsmen were injured in Lafayette Park, with close proximity to the White House, in a separate incident from the lightning bolt that struck the Washington Monument …. “Both were conscious and alert with no visible signs of burns,” Doug Buchanan, chief communications officer for the D.C. fire department, told the Washington Post. “It was clearly an indirect strike, presumably to a tree that was nearby.”

The injuries to the National Guardsmen were described as not life-threatening. The article went on to explain that while the image and the timing appeared to be portentous, the crown of the Monument is a common site for lightning strikes:

The Washington Monument, at 555 feet, is routinely struck by lightning on its aluminum crown, which has been melted down from multiple strikes per year.

On June 5 2020, Popular Mechanics explained that the Monument has been hit as many as six times in the course of a single electrical storm:

If lightning were to strike the marble monument directly, that could immediately melt the strike site, and scientists find colloquially named fossilized lightning from strikes that hit materials like sand. But the Washington Monument’s rod system works well, despite times when the obelisk has been hit as many as six times during a single storm. (They turn off the elevator that uses the lightning rod structure when there’s lightning.)

It is true that the Washington Monument was struck by lightning during an electrical storm on June 4 2020; subsequent posts inaccurately claimed the storm occurred on June 5 2020. It’s further true that images of the strike resembled the major arcana “Tower” card. Finally, it was not unheard of or even uncommon for lightning to strike the crown of the Washington Monument — on occasion repeatedly during the same storm. The top of the Monument was specifically designed to shield it from damage caused by electrical storms.