The last line of an October 1886 Statue of Liberty dedication speech read: "There is room in America and brotherhood for all who will support our institutions and aid in our development. But those who come to disturb our peace and dethrone our laws are aliens and enemies forever." 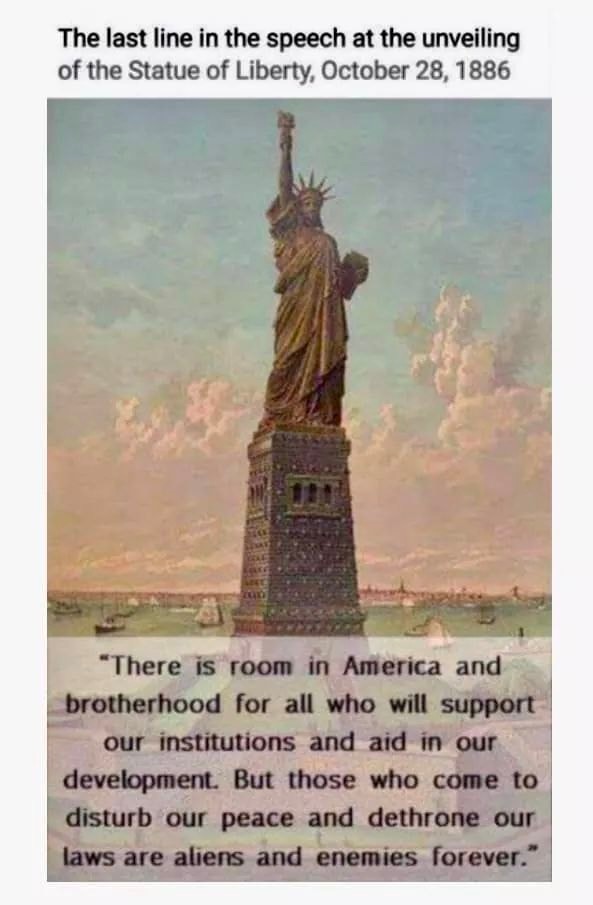 Atop a bronze Statue of Liberty, the meme’s text stated:

The last line in the speech at the unveiling of the Statue of Liberty, October 28, 1886

At the bottom, the purported speech’s final portion read:

“There is room in America and brotherhood for all who will support our institutions and aid in our development. But those who come to disturb our peace and dethrone our laws are aliens and enemies forever.”

The meme provided a very specific date, narrowing the field of possibilities from what may have been a number of Statue of Liberty speeches given in or around 1886. New York’s Statue of Liberty arrived in the United States in 1885, making the date plausible. And according to the New York Times, the Statue of Liberty was unveiled on October 28 1886, and United States President Grover Cleveland did speak to a crowd of attendees to mark the occasion.

A search (archived here) for the phrase “There is room in America and brotherhood” returned a not-very-promising 17 results, mostly linking to pages published in 2018 or later. If a speech was given with that line, it was not a widely documented part of recorded history. Nevertheless, it was possible that some variation on the phrase was part of Cleveland’s remarks or other official remarks given on that day.

The quote did appear in a January 2019 blog post, published less than two months before Miller shared the meme. In that post (which bore the rather ahistorical headline “Socialist Democrats and their Illegal Alien Brethren”) the author wrote:

On a print from 1886 of the Statue of Liberty someone wrote, “There is room in America and brotherhood for all who will support our institutions and aid in our development. But those who come to disturb our peace and dethrone our laws are aliens and enemies forever.”

That explanation for the quote also appeared in a January 2019 forum post referencing the same blogger. Before that, the phrase appeared in a November 2018 Facebook post in the meme’s format above, as well as in the comments of a Reddit The_Donald post featuring a nativist cartoon, purportedly from the 1920s, in February 2017.

Cleveland’s words, which did not demonstrate a nativist tone, may have eluded preservation in their entirety; however, a pamphlet from the inauguration event that included his speech can be viewed and read here:

The people of the United States accept with gratitude from their brethren of the French Republic the grand and completed work of art we here inaugurate. This token of the affection and consideration of the people of France demonstrates the kinship of republics, and conveys to us the assurance that in our efforts to commend to mankind the excellence of a government resting upon popular will, we still have beyond the American continent a steadfast ally.

We are not here today to bow before the representation of a fierce and warlike god, filled with wrath and vengeance, but we joyously contemplate instead our own deity keeping watch and ward before the open gates of America, and greater than all that have been celebrated in ancient song. Instead of grasping in her hand thunderbolts of terror and of death, she holds
aloft the light which illumines the way to man’s enfranchisement. We will not forget that Liberty has here made her home; nor shall her chosen altar be neglected. Willing votaries will constantly keep alive its fires, and these shall gleam upon the shores of our sister republic in the East. Reflected thence, and joined with answering rays, a stream of light shall pierce the darkness of ignorance and man’s oppression, until liberty enlightens the world.

The website Ephemeral New York described the day’s events as a “comedy of errors,” and other sites provided a summary of the day.

Collected comments attributed to U.S. senator and railroad baron Chauncey M. Depew on that date were scanned and published to the internet [PDF] by archivists at Columbia University:

Through the Obelisk, so strangely recalling to us of yesterday the past of twenty centuries, a forgotten monarch says, “I am the Great King, the Conqueror, the Chastiser of Nations,” and except as a monument of antiquity it conveys no meaning and touches no chord of human sympathy. But, for unnumbered centuries to come, as Liberty levels up the people to higher standards and a broader life, this statue will grow in the admiration and affections of mankind.

When [Benjamin] Franklin drew the lightning from the clouds, he little dreamed that in the evolution of science his discovery would illuminate the torch of Liberty for France and America. The rays from this beacon, lighting this gateway to the continent, will welcome the poor and the persecuted with the hope and promise of homes and citizenship. It will teach them that there is room and brotherhood for all who will support our institutions and aid in our development; but that those who come to disturb our peace and dethrone our laws are aliens and enemies forever.

I devoutly believe that from the unseen and the unknown, two great souls have come to participate in this celebration. The faith in which they died fulfilled, the cause for which they battled triumphant, the people they loved in the full enjoyment of the rights for which they labored and fought and suffered, the spirit voices of Washington and Lafayette join in the glad acclaim of France and the United States to Liberty Enlightening the World[.]

Depew’s remarks were likely in part reference to an ugly event that took place earlier that year, known as the Haymarket Riot or the Haymarket Affair. What began as a labor rights movement incidentally involving many German immigrants eventually escalated to “widespread hysteria directed against immigrants” after an unknown person detonated an explosive device during a labor demonstration. Shootings then broke out, leading to civilian casualties:

On May 3 [1886] one person was killed and several injured as police intervened to protect strikebreakers and intimidate strikers during a union action at the McCormick Harvesting Machine Company that was part of a national campaign to secure an eight-hour workday. To protest police brutality, anarchist labour leaders called a mass meeting the next day in Haymarket Square. That gathering was pronounced peaceful by Chicago Mayor Carter Harrison, who attended as an observer. After Harrison and most of the demonstrators departed, a contingent of police arrived and demanded that the crowd disperse. At that point a bomb was thrown by an individual never positively identified, and police responded with random gunfire. Seven police officers were killed and 60 others wounded before the violence ended; civilian casualties have been estimated at four to eight dead and 30 to 40 injured.

The Haymarket Riot created widespread hysteria directed against immigrants and labour leaders. Amid the panic, August Spies and seven other anarchists were convicted of murder on the grounds that they had conspired with or aided an unknown assailant. Many of the so-called “Chicago Eight,” however, were not even present at the May 4 [1886] event, and their alleged involvement was never proved. Nevertheless, Spies and three other defendants were hanged on Nov. 11, 1887, while another defendant committed suicide.

Miller’s meme appeared to claim that “the last lines of the Statue of Liberty dedication speech” cautioned there existed “room in America and brotherhood for all who will support our institutions and aid in our development,” adding that “those who come to disturb our peace and dethrone our laws are aliens and enemies forever.” The meme did not specify who specifically said this, phrasing it to make it sound as though it was an official part of a presidential speech, rather than one of many speakers at the inauguration ceremony who were decidedly not U.S. President Grover Cleveland.

Instead, that phrase was part of a far larger speech by one of many speakers that day, railroad attorney and aspiring politician Chauncey Depew, and it appeared to address simmering nativist sentiment following the Haymarket Affair. The portion directly preceding that excerpt (“rays from this beacon, lighting this gateway to the continent, will welcome the poor and the persecuted with the hope and promise of homes and citizenship”) was left out, masking the spirit in which the lines were delivered. Depew was one of many speakers that day along with U.S. President Grover Cleveland, and the entirety of their remarks painted a very different picture from the misleading meme, which appears to have been culled from or at least influenced by any number of white supremacist websites.