A popular photograph online can help users determine their stress level by how much it appears to be spinning.

Like many other memes, a roundly-debunked graphic continued to make the online rounds in 2020, though one version did gain more traction earlier in the year.

The photograph itself shows an optical illusion, but the caption often accompanying it is misidentified, using exoticization to play to readers’ insecurities:

This image was created by a Japanese neurologist. If the image is still, you are calm, if the image moves a bit, stressed and if it moves like a carousel, you are very stressed. Tell me how are you doing? 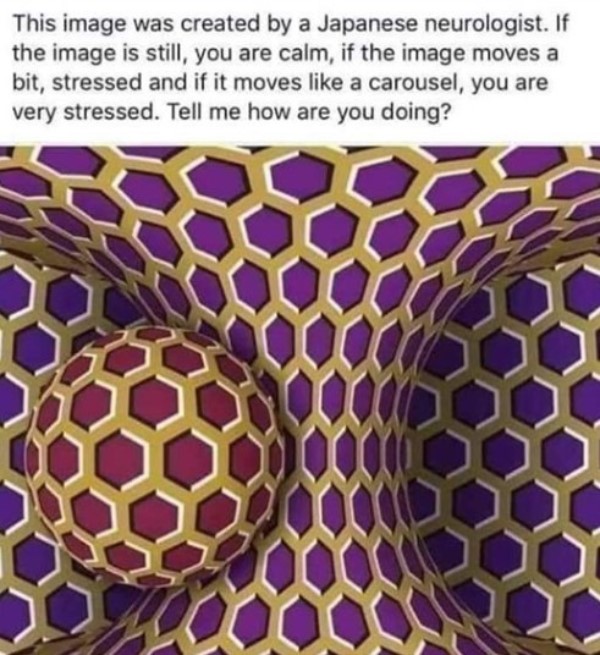 One Facebook user’s reproduction of the graphic has been shared more then 89,000 times since being posted in January 2020. And as recently as March 26, 2020 another user’s post garnered more than 7,000 shares.

But as Agence France-Presse has reported, the graphic has been circulated for much longer: its first iteration, posted onto Facebook in November 2018, amassed more than 180,000 shares within six weeks. The creator, though, is not “a Japanese neurologist” but a Ukrainian graphic designer identified as Yurii Perepadia:

AFP found him also on Facebook and asked him about the image.
“This image is one of the best selling. Make it was not very hard. At that time I already had experience working with Adobe Illustrator”, he told AFP via Facebook messenger on January 10.

Perepadia told AFP he created it in 2016. Several posts confirm the image did go online that year.

Besides being spotted on commercial photography platforms, Perepadia posted the image on his own Twitter account — where, ironically, it did not receive much attention:

He also shared it on his Instagram account, where it has been “liked” more than 1,500 times, and also shared the secret of its creation:

According to AFP, the photo has been shared all over the world. Perepadia told the BBC in 2018 that as the photo continued to spread online, he wrote letters demanding that it be taken down.

“It annoyed me,” he said. “After all, it was copyright infringement.”

However, the graphic continues to make the rounds. We would like to point out here that if you feel that you may be under stress in a time of increasing instability during a global pandemic, you would not need a graphic to tell you so — even if it was accurate, which it is not.