The conspiracy theory pushing the idea that COVID-19 binds itself to patients’ hemoglobin has spread beyond English-language websites, and it is now targeting readers on social media and news organizations in Spanish.

This version of the claim, presented as an “important update” and attributed to Dr. Hany Mahfouz, has not only been circulated on Reddit, but also covered as actual news by outlets in Argentina and Colombia (although the latter site, El Espectador, presented it as a “questionable” hypothesis.) The news site Maldita.es, which is based out of Spain, further reported that the message was also spread on Facebook-owned messaging platform WhatsApp: 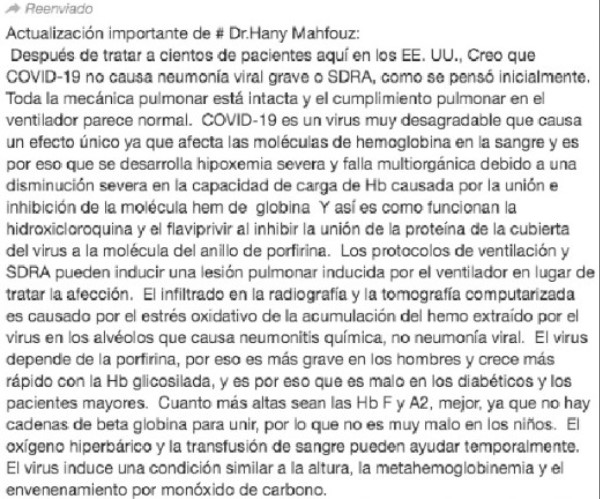 The English translation of the message reads:

After treating 100s of patients here in US, I think COVID-19 does not cause severe viral pneumonia or ARDS as it was thought initially. All the lung mechanics are intact and lung compliance on ventilator appears normal. COVID-19 is a very nasty virus that causes unique effect as it affects the hemoglobin molecules in the blood and that is why severe hypoxemia and multi-organ failure develop due to a severe decrease in Hb carrying capacity caused by binding and inhibiting the heme molecule of the globin. And that how Hydroxychloroquine and Flaviprivir work through inhibiting the attachment of the virus coat protein to the Porphyrin ring molecule. Ventilations and ARDS protocols may induce ventilator-induced lung injury rather than treating the condition. The infiltrate on the X-ray and CT scan is caused by oxidative stress of the accumulation of the heme extracted by the virus in the alveoli causing chemical pneumonitis, not viral pneumonia. The virus is dependent on the Porphyrin that is why it is more severe in men and grows faster with glycosylated Hb and that is why it is bad in diabetics and older patients. The higher the Hb F and A2 makes it better as there are no Beta globin chains to attach so it is not very bad in children. Hyperbaric oxygen and blood transfusion may transiently help. The virus induces a condition similar to high altitude, methemoglobinemia and carbon monoxide poisoning.

The name listed alongside the message is common — we found multiple iterations searching through medical listing websites — but there is no indication as of yet that any healthcare provider published it of their own accord.

Regardless of who posted it, the claim itself is unfounded. A past variation of this persistent rumor which gained traction in English-speaking circles in early April 2020 was in fact published on the blog platform Medium by a cryptocurrency YouTuber named Andrew Gaiziunas, who has no medical training to speak of. The post was later removed and Gaiziunas attempted to justify himself by claiming he posted his version to “see if anyone would have feedback.”

As Maldita reported, Gaiziunas’ claim has been further debunked by actual healthcare professionals like Dr. Mattew Amdahl, who has earned both a medical degree and a PhD in bioengineering at the University of Pittsburgh. He wrote:

[Gaiziunas’] “scientific” narrative begins with the SARS-CoV-2 virus entering red blood cells (RBCs). Once inside the RBCs, the post states that the virus rapidly removes the iron from RBC hemoglobin molecules, leading to 1) depletion of functional hemoglobin (with the virus bound to its porphyrin ring) and 2) accumulation of toxic iron in the bloodstream. All of the clinical manifestations of Covid-19 are subsequently attributed to this process, despite the fact that there’s effectively no evidence to support such a mechanism of viral entry into RBCs and interaction with hemoglobin. Alarmingly, the blog post relies on a series of assumptions that have little to no support within the current scientific literature.