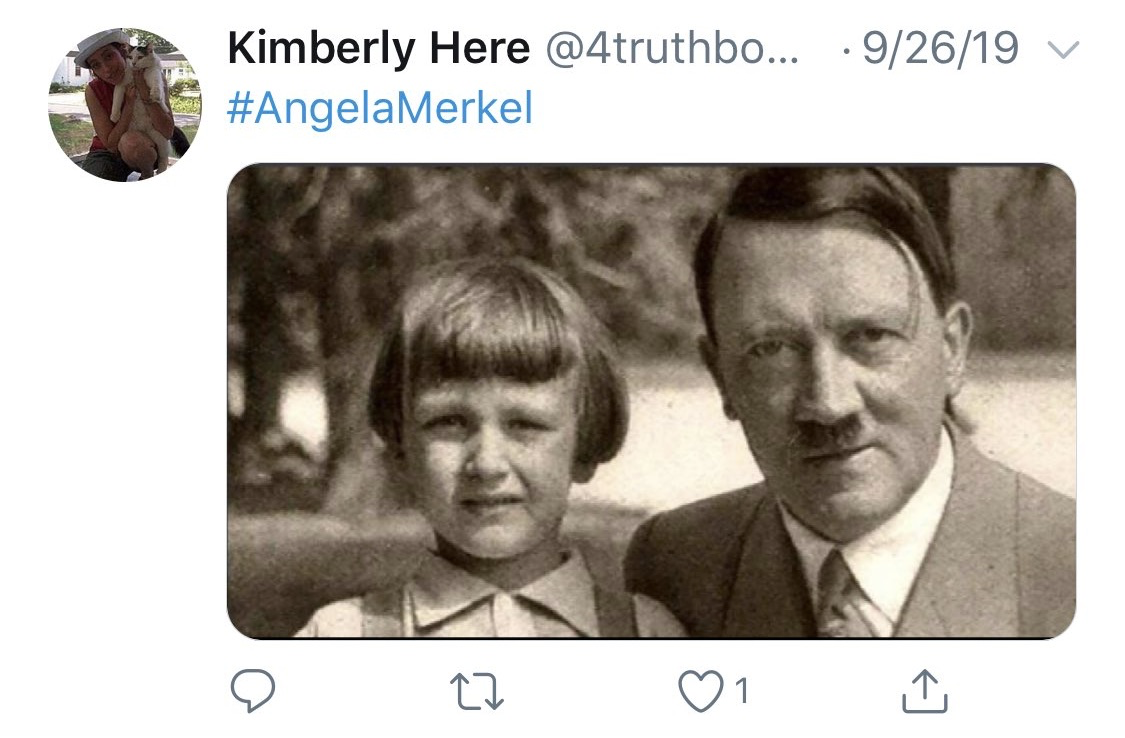 The disinformation attempt appeared not long after Merkel spoke at the United Nations Climate Action Summit in September 2019:

Almost all opening speakers are #women Heads of State at #ClimateActionSummit now #AngelaMerkel says – with #DonaldTrump sitting opposite – that #climatechange is men-made, that we as industrizlized nations are responsible and need to take responsibilty for damage in South #SDG13 pic.twitter.com/z5TzZszzqn

The image was not new; it featured heavily in QAnon conspiracy theories in early and mid-2018, as well:

Can this be TRUE? Angela Merkel Is The Daughter of Hitler And Hitler Was a Rothschild #Q #QAnonhttps://t.co/mYz7xEbzIu pic.twitter.com/wPPTG4hSBq

Sometimes the image appeared alone (with appended comment such as “now it’s making sense!”), and other times it was in a larger, more detailed context with screenshots from 4Chan and 8Chan:

Despite the claim’s staying power, it is extremely simple to disprove — as has been noted in concurrent tweets each time it spreads:

This thread is genuine gold, people. Starts off claiming this is a picture of Hitler and Merkel together, when told this is chronologically impossible, her mate pops up to suggest Merkel is Hitler’s clone and she incorporates that without missing a beat. pic.twitter.com/3EgRQhZSbQ

Here’s an example of how MAGA-types put fake facts into circulation as though they are true & repeat them until they’re unquestioningly accepted. Trump is doing this with the Bidens & has been doing it all along. The truth here? Angela Merkel was born 9 years after Hitler died. pic.twitter.com/Cd3aAz3XuS

Exacerbating the issue is the fact that Google Image Search automatically suggested “Merkel Hitler” or “Angela Merkel with Hitler” as a “possible related search”: 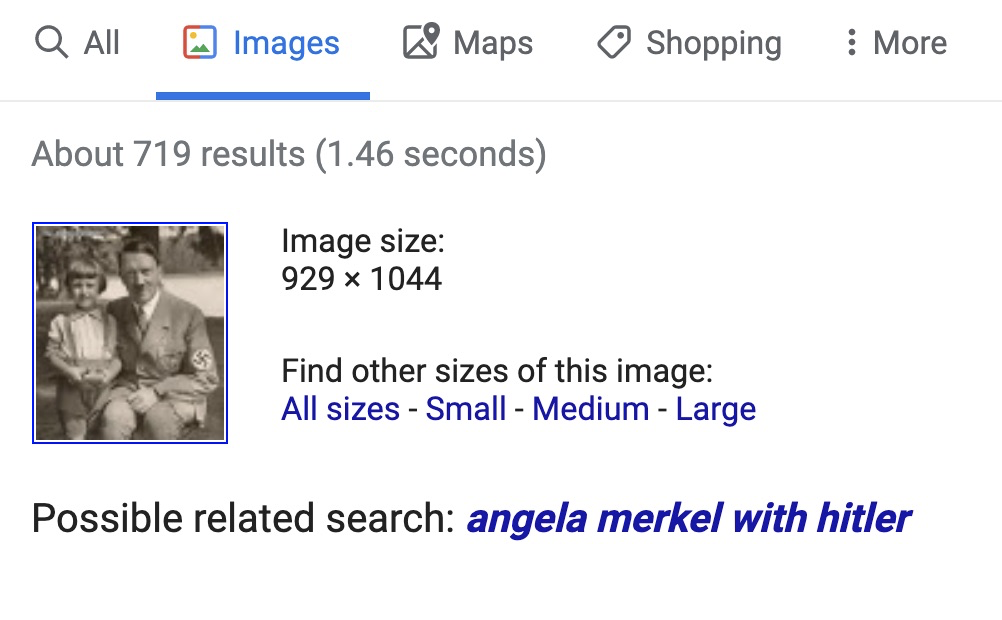 We were unable to find the specific photograph among archival images of Hitler with small children (and there are many.) However, a similar image showing what appears to be the same child and date stamped 1937 appeared in stock photograph archives of the Nazi leader attempting to use children to soften his image. The photograph was captioned:

It is not clear whether @4truthbombs was suspended over the mislabeled image purporting to show Angela Merkel with Adolf Hitler or for some other reason, but the disinformation has long been in circulation, and did not originate with that particular account. Claims like it rely on readers’ lack of inclination to fact-check basic aspects of the claim, as well as hopes that people would be swayed by a mislabeled photograph.

As noted repeatedly in response tweets, Chancellor Angela Merkel was born in July 1954. Adolf Hitler died on April 30 1945, ruling out all possibility that he had ever appeared in a photograph with her, much less — as some of the more overheated claims would have you believe — fathered her.