In May 2021, a year-old post about a Chick-Fil-A’s table “honoring fallen soldiers” recirculated, with a secondary claim that the rather innocuous image was somehow “triggering liberals” across social media: 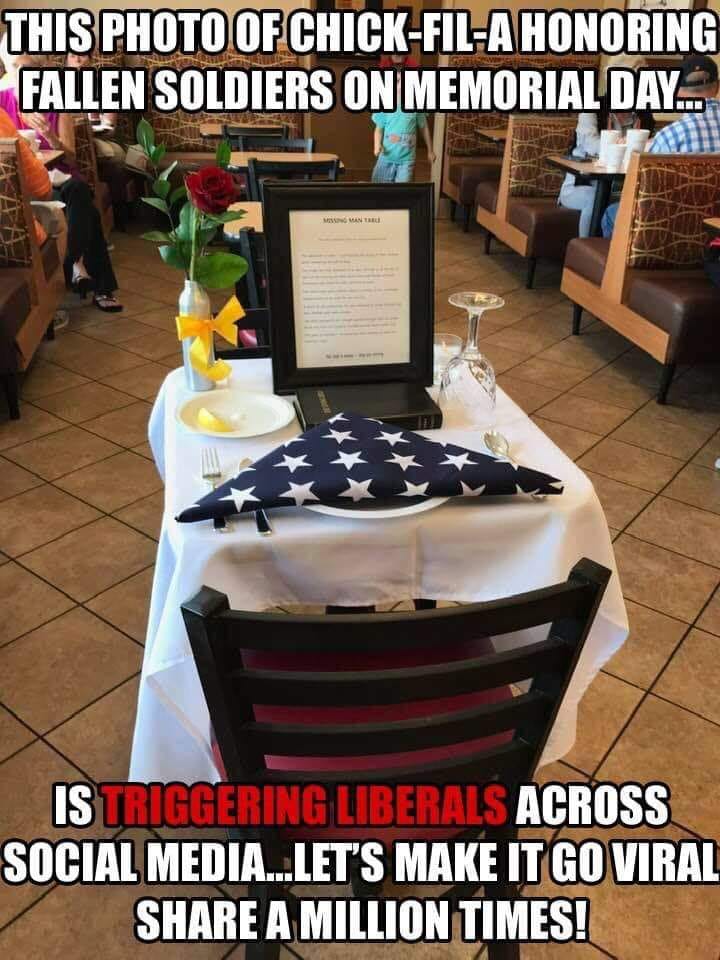 Folded flags have been the subject of fact-checks and prompted a whole lot f angry discourse in 2020, but not because of some arcane ability to “trigger liberals.” The folded American flag placed on the table is recognizable as the sort given to a fallen soldier’s next of kin at their funeral:

To honor the memory of their service to their country, a United States flag drapes the casket of deceased veterans. The field of blue is at the head and over the left shoulder. After Taps is played, the flag is carefully folded into the symbolic tricorner shape. The folded flag is then presented as a keepsake to the next of kin[.]

The Facebook post approached the half-million share mark as of May 28 2021. Across a photograph of an unoccupied table with a ceremonially folded flag, a Bible, and a “Missing Man Table” flag, frankly disrespectful “meme” text read:

At the time the meme first appeared, it was shared to Reddit several times on different subreddits. They included r/forwardsfromgrandma (twice) and r/TheRightCantMeme:

This is supposed to be offensive somehow from TheRightCantMeme

Commenters on Reddit disputed the notion that anyone was “triggered” by the meme, responding:

“The only thing I’m triggered by is using a kind gesture as an excuse to insult veterans in an attempt to harm people who you don’t like politically. Fuck you veterans I gotta trigger some libs!”

“Where exactly does all this liberal triggering happen? I’d like to go there and see it at least once.”

Naturally, we found no instances of anyone of any political persuasion being offended by the gesture, which dated back to at least 2017. A post to r/pics on May 29 2017 simply showed Chick-Fil-A’s “Missing Man Table,” with a close-up image of a framed explanation of the gesture:

Text on the image to the right explained the meaning of each component seen in that version of the “Missing Man Table,” and their respective meanings:

“This table is reserved to honor our missing comrades in arms. This tablecloth is white — symbolizing the purity of their motives when answering the call of duty. The single red rose, displayed in a vase, reminds us of the life of each of the missing and their loved ones and friends of these Americans who keep the faith, awaiting answers. The vase is tied with a yellow ribbon, a symbol of our continued determination to account for our missing. A pinch of salt symbolizes the tears endured by those missing and their families who seek answers. The Bible represents the strength gained through faith to sustain those lose from our country, founded as one nation under God. The glass is inverted — to symbolize their inability to share this evening’s toast. The chair is empty — they are missing.”

Due to the unfortunate popularity of the meme, we were unable to locate the original image or location for the photograph defaced to create it. We located a May 26 2019 Facebook post from a Chick-Fil-A in Florida, suggesting the practice spanned Chick-Fil-A locations:

A May 28 2019 USAToday.com item, “Why these tables were empty at Chick-fil-As around the country this weekend,” showed five separate “Missing Man Table” memorials in five separate Chick-Fil-A restaurants:

At many Chick-fil-A restaurants around the country, one seat was empty over the weekend [of Memorial Day in May 2019].

To honor soldiers who died while serving in the Armed Forces, the fast food chain set up “Missing Man Tables” at many locations for Memorial Day weekend.

Missing Man Tables are memorials set up in military dining facilities to honor dead, missing or imprisoned service members and are full of symbolic items and colors.

“This table is reserved to honor our missing comrades in arms,” a framed statement that accompanied Chick-fil-A’s tables read.

In late May 2019, Google Trends indicated that the search term “Chick Fil A honoring fallen soldier table” was extremely popular, but it appeared clear that the search was due to the appearance of the tables in chain locations across the United States — not anyone’s “offense” regarding them.

A May 2020 meme claimed its “photo of Chick-Fil-A honoring fallen soldiers on Memorial Day is triggering liberals across social media,” and the meme’s second half read “let’s make it go viral[,] share a million times.” The tables were real and appeared as early as 2017, but the claim it was “triggering liberals” was later added in order to cynically create Facebook engagement by appealing to partisanship using the deaths and disappearances of those who have served in the United States military. As such, we rated the claim Decontextualized.