"Bringing Our Boys Home ... 'This unbelievable photo is of the RMS Queen Elizabeth ship pulling into New York harbor in 1945, packed with US soldiers returning from Europe ...'"

On August 20 2022, the Facebook page “USA Military Families” shared a striking image, purportedly a photograph of American troops heading to New York at the end of World War II in 1945; the image was shared to Imgur three days later: 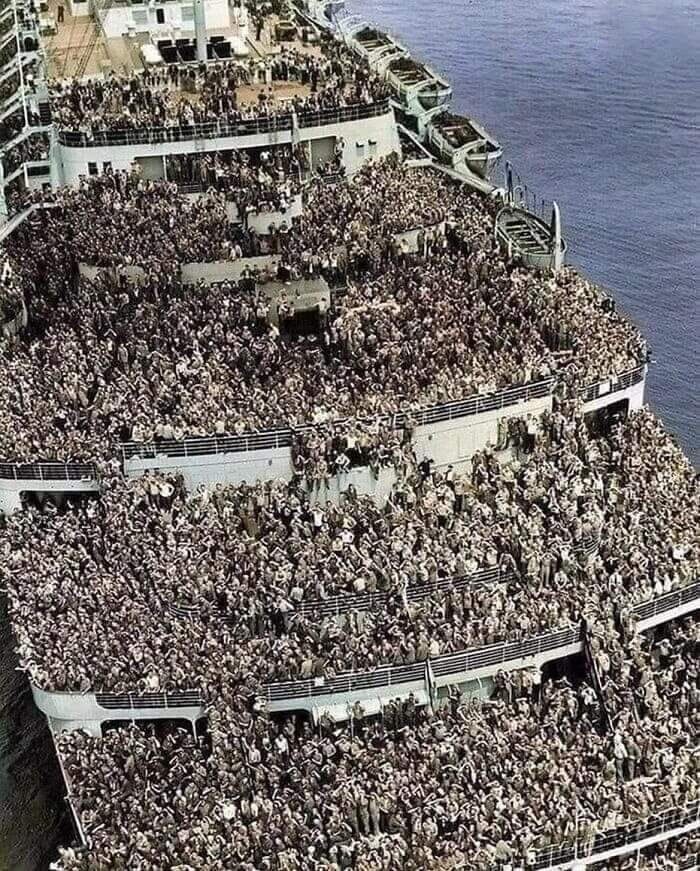 “This unbelievable photo is of the RMS Queen Elizabeth ship pulling into New York harbor in 1945, packed with US soldiers returning from Europe. The ship left Scotland on August 6th, 1945, and arrived in New York on August 11th, 1945. The ship looks absolutely packed which might be attributed to all of the soldiers coming up top for the arrival into NY, or it might be because Eisenhower opted to get more soldiers home all at once, rather than more ships with fewer soldiers on.

The original was taken in black and white, although it’s not clear how or from where the birdseye view photograph was captured. This color version of the photo is credited to Royston Leonard.”

Neither variation included a source; our reverse image searches did not immediately connect the image to an archive or similar photo repository. On August 1 2022, a Twitter account shared the image, comparing it to spring break festivities:

Troops coming home after WW2 or The Grind at MTV Spring Break 1995? pic.twitter.com/VLxSvQc4w4

Nearly all image matches for the image pointed to social media platforms, from Facebook and Twitter to Pinterest and LinkedIn. A November 2021 iteration of the image on the website RareHistoricalPhotos.com attributed the image to the New York Historical Society, but did not seem to provide a link to that source.

According to that brief entry, the large crowds on deck were for two related reason: Homesick troops and the vessel’s proximity to port:

It looks crowded because everyone is on deck as it is pulling into the harbor (look at the top of the picture).

According to Eisenhower’s memoir, some troops were complaining to the press about the slow rate at which they were being returned to the States.

He got wind of this and asked a big gathering of troops at an event he was attending whether they wanted to continue filling the ships at normal capacity or be crammed the hell into them to get home as soon as possible. They overwhelmingly applauded the later option.

In May 2018, a version of the photograph appeared in a Scottish Sun gallery of World War II images. A caption read:

American troops piled onto a heavily crowded ship to be transported back to the New York Harbour[.]

Validation of the image’s widespread attribution came via an unlikely source — an unrelated August 2018 fact check by AFP. At that point, the image was miscaptioned as showing “Italian immigrants”:

The original photo is featured in the New York Historical Society (NYHS) collections, and is most notably highlighted on NYHS blog “The Hyphen”. The caption explains that in 1945, “Crowded ships brought American troops back to (the) New York harbor for months after V-E Day.” This particular photo is from May 8, 1945.

Several internet users, as well as the ship-specialized website liverpoolships.org, pointed out that the ship is the Queen Elizabeth, used during World War II for troop transport.

Asked for more information about the photo, NYHS told AFP in an email that this photo was taken from its World War II Photograph Collection. It was taken in 1945 by US Third Naval District Coast Guards, and was featured in a file about the Queen Mary and Queen Elizabeth liners.

A slightly older post on the same blog featured the image, with a caption suggesting that the previous post had featured the photograph for illustrative purposes. That caption dated the image to May 8 1945:

In August 2022, at least three “Bringing Our Boys Home” posts featured an archival image of American troops headed from the UK to New York in 1945. Posts claimed that the image was from August 1945, but the apparent source (the New York Historical Society) indicated it was taken on May 8 1945. However, the photograph was real, and it was unedited aside from several colorized versions. In August 2018, the image circulated alongside an inaccurate claim that it depicted Italian immigrants.