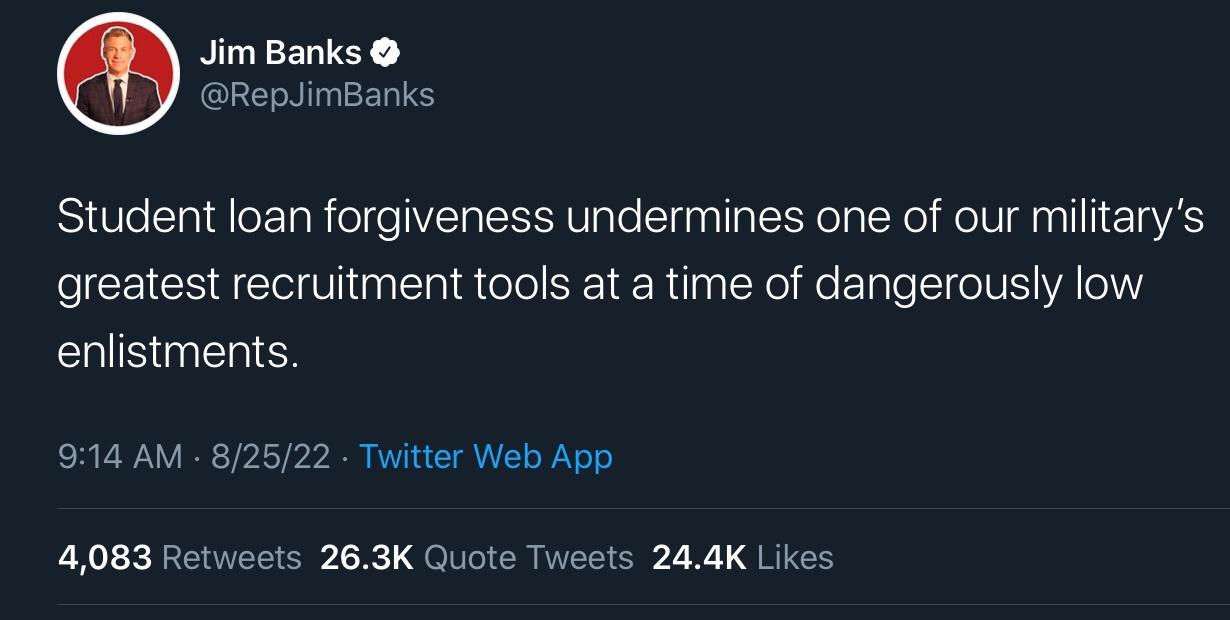 A biography on the website for Rep. Jim Banks (R-Indiana) indicated that he served in the military:

Congressman Banks currently serves in the U.S. Navy Reserve as a Supply Corps officer. In 2014 and 2015, he took a leave of absence from the Indiana State Senate to deploy to Afghanistan during Operations Enduring Freedom and Freedom’s Sentinel. Due to a unique state law regarding leaves of absence, his wife, Amanda, was elected to serve in his place during the deployment. Banks is often told she made a better State Senator than he did.

Reactions to screenshots of the purported tweet were reasonably straightforward. Commenters largely seemed to feel that the sentiment implied that prospective students from modest or low-income backgrounds ought to be coerced into enlisting in the military; few people pointed out that forgiving existing loans in no way funds college for future students.

The tweet was real, and Banks tweeted it on the morning of August 25 2022:

Student loan forgiveness undermines one of our military’s greatest recruitment tools at a time of dangerously low enlistments.

So you are shamelessly using the desperation of poor Americans to recruit them to the military? Do you hear yourself?

On August 25 2022, the Biden administration’s announcement of a long-anticipated student loan forgiveness plan generated significant social media discussions. Among the responses was a tweet from Indiana Republican Rep. Jim Banks, who posited that “Student loan forgiveness undermines one of our military’s greatest recruitment tools at a time of dangerously low enlistments.” Social media commenters considered the tweet to be (among other things) “saying the quiet part out loud.” The tweet was real, and it had not been deleted as of August 26 2022.