"Biden says even @FoxNews has a mandatory vaccine policy. Is that true? That can't be true. Have Hannity and Tucker and the others gotten the vaccine? That just can't be true."

On September 14 2021, a popular Imgur post showed a screenshot of a Todd Starnes tweet, in which Starnes questioned whether Fox News had a “mandatory vaccine policy”:

Biden says even @FoxNews has a mandatory vaccine policy. Is that true? That can't be true. Have Hannity and Tucker and the others gotten the vaccine? That just can't be true.

Biden says even @FoxNews has a mandatory vaccine policy. Is that true? That can’t be true. Have Hannity and Tucker and the others gotten the vaccine? That just can’t be true.

Starnes’ expression of disbelief was two-tiered; the primary claim was whether Fox News (a purveyor of content opposing vaccine requirements) itself had a mandatory vaccine policy, and the second was whether U.S. President Joe Biden had said so. 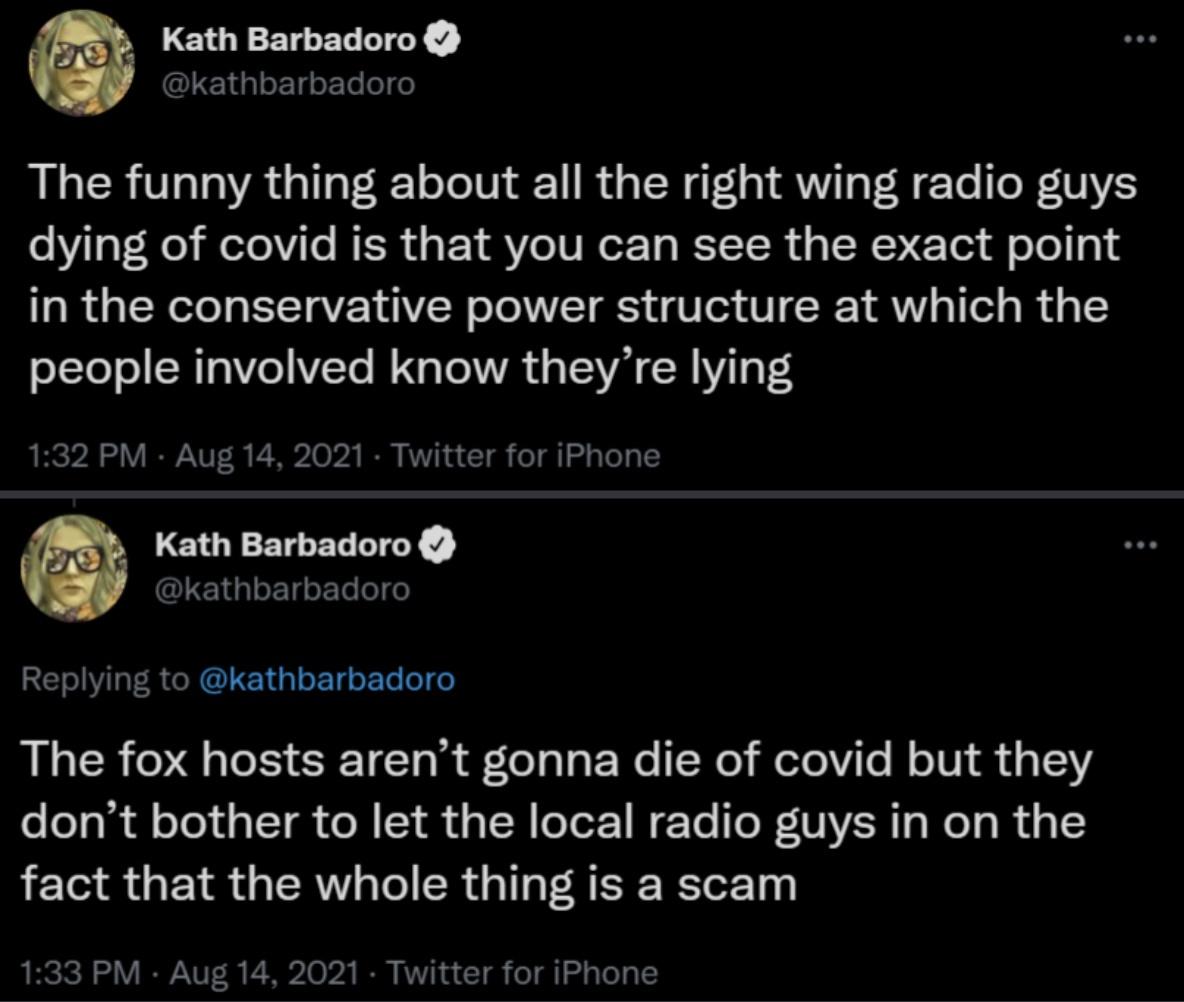 In the tweets, Kath Barbadoro observed:

What Did President Biden Say About Fox News’ Vaccine Mandate?

Starnes’ tweet claimed that “Biden says even @FoxNews has a mandatory vaccine policy,” and asked if that was “true.”

President Joe Biden held up Fox News as an example of a corporation that has already implemented the kind of COVID-19 vaccination and testing policy the administration is preparing to mandate nationwide.

Biden announced on Thursday [September 9 2021] that the department of labor [sic] will issue an emergency rule requiring all employers with 100 or more employees to mandate vaccination or weekly testing for their employees.

“Some of the biggest companies are already requiring this: United Airlines, Disney, Tyson Food, and even Fox News,” Biden said during an address from the White House on Thursday evening [September 9 2021].

Business Insider both paraphrased and directly quoted Biden. A transcript of Biden’s remarks was published on September 9 2021 to WhiteHouse.gov (“Remarks by President Biden on Fighting the COVID-⁠19 Pandemic”), and the entirety of the “even Fox News” quote was included:

My job as President is to protect all Americans.

So, tonight [September 9 2021], I’m announcing that the Department of Labor is developing an emergency rule to require all employers with 100 or more employees, that together employ over 80 million workers, to ensure their workforces are fully vaccinated or show a negative test at least once a week.

Some of the biggest companies are already requiring this: United Airlines, Disney, Tysons Food, and even Fox News.

Fox employees, including those who work at Fox News, received an email, obtained by CNN Business, from the company’s Human Resources department in early June [2021] that said Fox had “developed a secure, voluntary way for employees to self-attest their vaccination status.”

“Thank you for providing FOX with your vaccination information,” the email said. “You no longer are required to complete your daily health screening through WorkCare/WorkMatters.”

The concept, which was first reported [on July 19 2021] by Ryan Grim on The Hill’s morning streaming show, is known internally as “FOX Clear Pass” … Fox News has spent months portraying the notion that people might be asked to show vaccination status as dangerous to personal freedom and anti-American.

… Fox News, whose top personalities have for months assailed the concept of vaccine passports and argued that asking about vaccine status amounts to a major intrusion of privacy, told employees this week [of August 18 2021] that they must disclose their vaccination status to the company.

In a Tuesday [August 17 2021] memo updating staff on Covid-19 procedures, Fox News Media chief executive Suzanne Scott said that the company has “asked all employees — whether on site as part of our essential workforce or working remotely — to upload their vaccination status” into an internal database.

“All employees must enter their status no later than today, August 17th [2021], by close of business,” Scott wrote, bolding that particular sentence in her email, which was obtained by CNN Business, but first reported on by AdWeek.

Scott added that while masks remain optional for vaccinated employees, the company is “requiring employees to wear a mask in small, confined spaces with limited opportunities for social distancing and where there are multiple employees, including control rooms.”

Employees who reported their status are allowed to bypass the otherwise required daily health screening.

On September 9 2021, pundit Todd Starnes tweeted a claim that U.S. President Joe Biden said “even [Fox News] has a mandatory vaccine policy,” positing that the claim “can’t be true.” In actuality, Biden described policy wherein companies with more than 100 employees “ensure their workforces are fully vaccinated or show a negative test at least once a week.” In July 2021, Fox News’ “Fox Clear Pass” was virtually the same as Biden’s “tyrannical” proposal — but in August 2021, Fox mandated employees disclose and submit their vaccination status. The most reasonable interpretation of Starnes’ tweet was a question of whether Biden accurately described Fox News’ vaccine policy on September 9 2021, and a comparison of the transcript of Biden’s remarks with widely-reported information about Fox News’ policy indicated that Biden was accurate and truthful.