Fewer than ten states in the U.S. have enacted bans against the use of "trans panic" legal defenses.

A graphic posted on a transgender-oriented website’s Facebook page does, for the most part, illustrate a particular form of transphobic courtroom discrimination.

The post by “TransMusePlanet,” which has been shared more than a thousand times since it was published on September 30 2019, displays a map of the United States with most of the states highlighted, along with a caption explaining that they represent states “where it is legal to argue that a trans woman is responsible for your decision to murder her”: 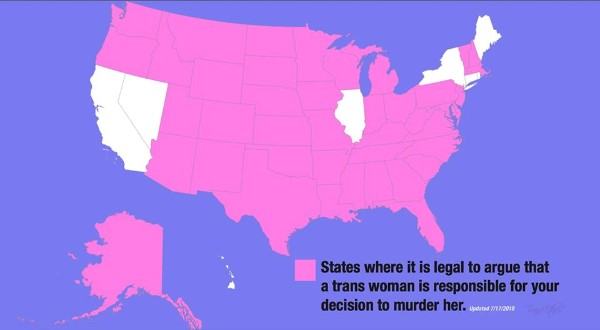 The chilling explanation is a description of what has classically been called the “trans panic” defense, a variation of the term “gay panic.” The National LGBT Bar Association also describes the tactic as “LGBTQ+ Panic.”

The American Bar Association reported that legal defense teams continue to use “gay panic disorder” as a defense even though the American Psychological Association had debunked it as a legitimate condition:

It must be noted that gay/trans panic is not an affirmative legal defense; it is a tactic to strengthen the defense by playing on prejudice. It has, however, been used to not only explain a defendant’s actions, but to excuse them as well.

The TransMusePlanet post itself is mostly accurate compared to a similar graphic published by the LGBT Bar. However, the latter group’s map reflects the passage of a bill in Connecticut banning the “gay panic” defense in June 2019.