A Republican Party website promoting the agreement between the Taliban and former President Donald Trump's administration calling for the withdrawal of U.S. troops from Afghanistan is no longer live.

As right-wing political figures scrambled to attack U.S. President Joe Biden for the devastation accompanying the Taliban advance across Afghanistan in August 2021, an official Republican Party webpage praising his predecessor for setting up the United States’ withdrawal from that country in the first place quietly vanished.

Newsweek credited Washington Post reporter Dave Weigel as the first to identify that the webpage — headlined “President Trump is Bringing Peace To The Middle East” — was no longer accessible on the Republican National Committee’s website:

How quickly can the politics around Afghanistan change? Here's a section on the RNC's website in June; click it now and you get a 404 error. (Rest of page was about Kosovo/Israel-Arab deals.) https://t.co/kDJo95QfiF pic.twitter.com/HkZok9mgJW

“How quickly can the politics around Afghanistan change?” Weigel wrote on August 15 2021. “Here’s a section on the RNC’s website in June; click it now and you get a 404 error.”

This is obviously material from 2020 that stayed online for a while, not a new statement from June 2021. It just jumped out to me as an example of how politically popular withdrawal was until this weekend. RNC didn’t scramble to delete it, it was just left up before site updates.

An archive of the webpage, however, is still accessible: 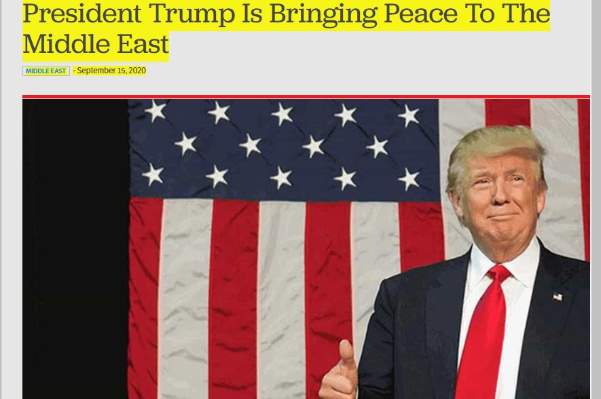 The agreement, reached by the Trump administration and the Taliban in February 2020, called for the withdrawal of “all military forces of the United States, its allies, and Coalition partners, including all non-diplomatic civilian personnel, private security contractors, trainers, advisors, and supporting services personnel” from Afghanistan within 14 months of its signing.

The Republican webpage boasted that the deal “has been called the ‘best chance to end this conflict'”: 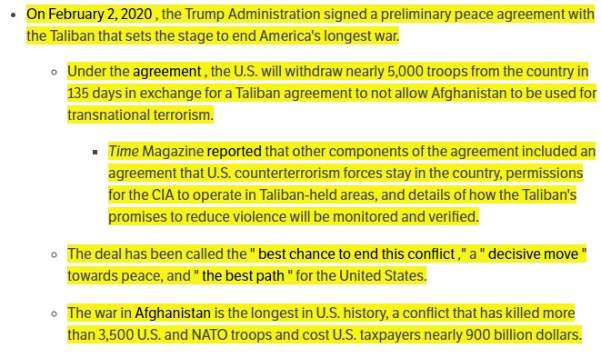 That October, Trump promised on his Twitter account that the U.S. “we should have the small remaining number of our BRAVE Men and Women serving in Afghanistan home by Christmas,” a statement that was reportedly welcomed by the Taliban. (Trump’s national security advisor, Robert O’Brien, later suggested to reporters that Trump was engaging in wishful thinking.)

As Trump and his party allies attempted to deflect any responsibility and blame Biden’s administration for the Taliban ousting the civilian government, however, more evidence surfaced of the former real estate mogul trying to take credit for the U.S. leaving Afghanistan. When Biden announced in April 2021 that American troops would leave by September 11 2021 — the 20th anniversary of the 9/11 attacks — Trump complained on his blog that it wasn’t soon enough:

First, we can and should get out earlier. Nineteen years is enough, in fact, far too much and way too long. I made early withdrawal possible by already pulling much of our billions of dollars of equipment out and, more importantly, reducing our military presence to less than 2,000 troops from the 16,000 level (likewise in Iraq, and zero troops in Syria except for the area where we KEPT THE OIL)

That post is not visible on Trump’s blog, but screenshots are still available online: 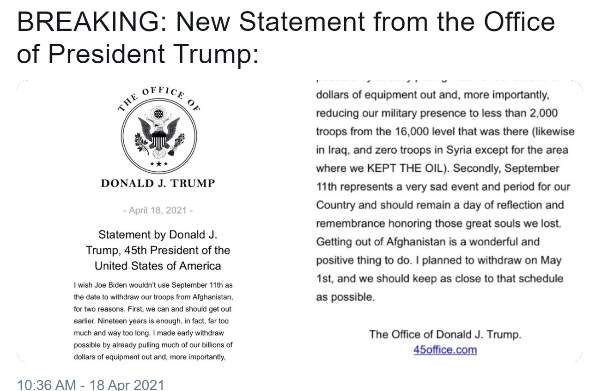 Footage also circulated online of Trump boasting about setting the departure of Afghanistan in motion:

Despite this, at least one Republican senator is attempting to reshape the confusion and disinformation around Afghanistan into an attempt to pressure U.S. President Joe Biden to resign. The Republican Party has further claimed that the disappearance was simply due to the fact that they are moving old posts over to a new site. It has not, however, addressed why those pages were deleted before adding them to the purported new site — amid chaos in Afghanistan precipitated by political decisions made during the Trump administration.