A photograph shows a mysterious patch or implant on the side of U.S. President Donald Trump's head during the September 2020 presidential debate.

On September 29 2020, during the first round of presidential debates ahead of the November 3 2020 U.S. election, a popular tweet purportedly showed a patch or implant on President Donald Trump’s head:

First presidential debate question from Chris Wallace to Donald Trump: What is that thing on your head? pic.twitter.com/j6cFGBK3NK

Source for the Image, Earliest Variations: ‘Ya Track Out Ma’

Although it was sent on the same night as the debate, the tweet was timestamped at 7:07 PM Eastern time, before the debate began — and it did not show Trump’s head before or during the September 29 2020 debate. Neither was the image recent in September 2020; a reverse image search indicated that it was first crawled in March 2016 — before Trump won the 2016 Republican primary: 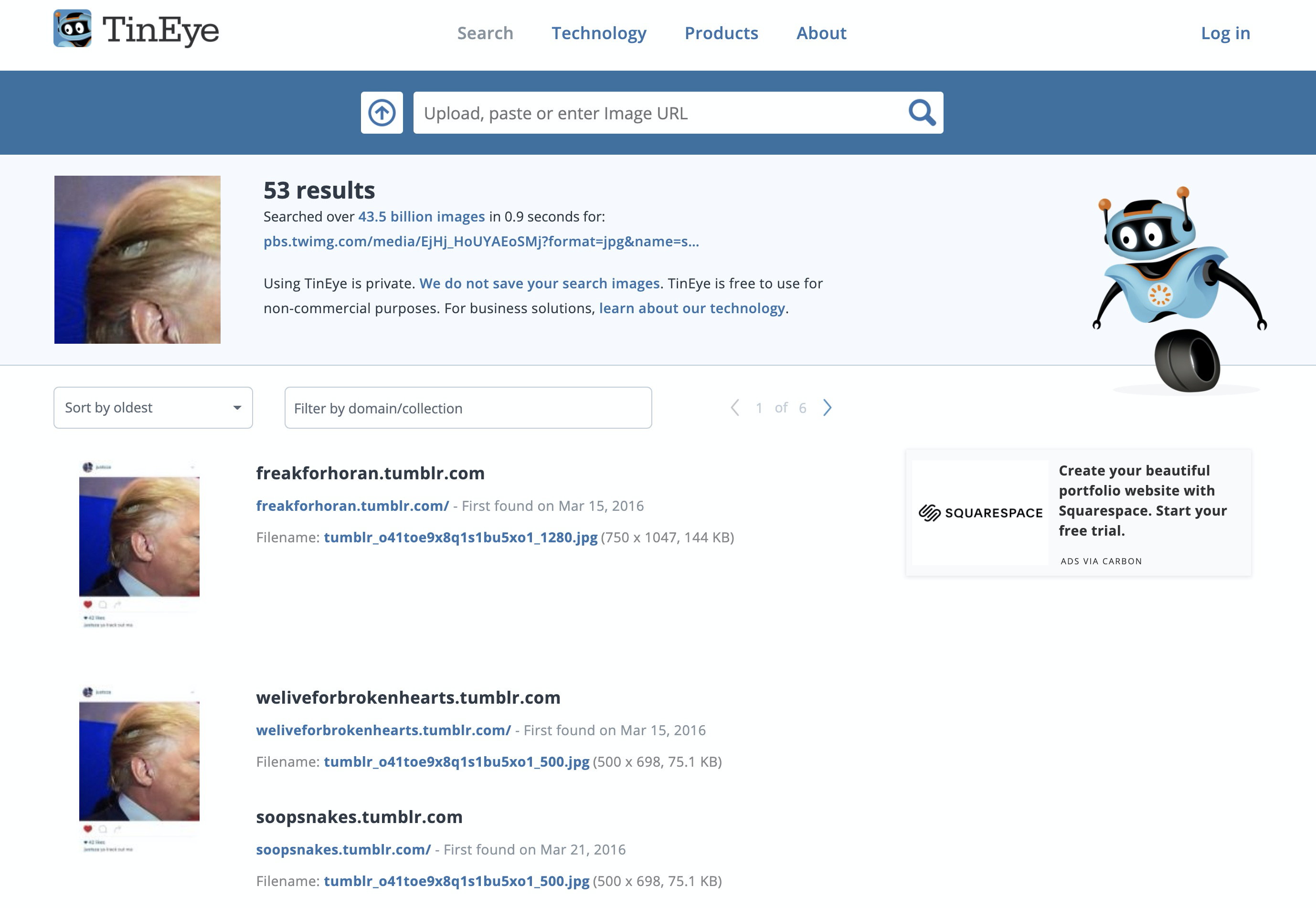 Most of the initially crawled pages from March 2016 led to Tumblr pages, not posts, making it difficult to locate those early images. However, every initial iteration appears to have been shared to Tumblr by user justsza: 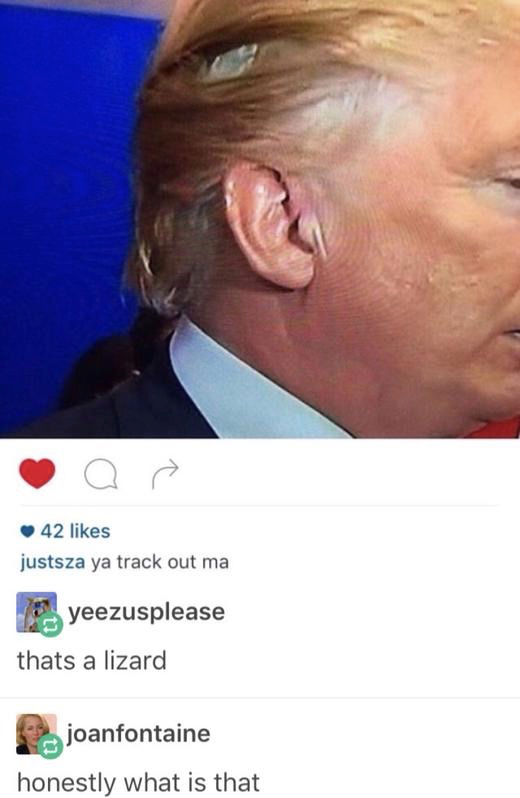 ya track out ma

A “track” is part of tape or sew-in hair extensions, and hair is typically styled to obscure or conceal “tracks.” In a 2020 People item, actor Zendaya explained the various methods for attaching hair to people’s heads, and what a “track” was in that context:

Extensions
“These are clips, they are a form of extension that you clip into your hair,” she says, holding up a weft of hair with a clip attached to it. She then holds up a similar piece without a clip, saying, “This is a track. Tracks can be made into clips, they can be taped into hair, or they can be sewn into hair.”

Weaves
“A weave is when you braid your hair up, you have a net over it and you weave the hair — the tracks — into the net that is sewn onto your head,” she says. “You can have it up to a month and some change depending on how your hair grows and how you take care of it. You must get it re-done, it can’t stay on forever, that is disgusting.”

By saying “ya track out,” justsza was speculating that then-candidate Trump’s purported hair extensions were inadvertently visible in the close up image. Although it was entirely possible the image showed a portion of Trump’s hair where an extension track was styled in, tracks were typically narrower, longer in length, and not as thick or large (particularly on fine hair or short hairstyles): 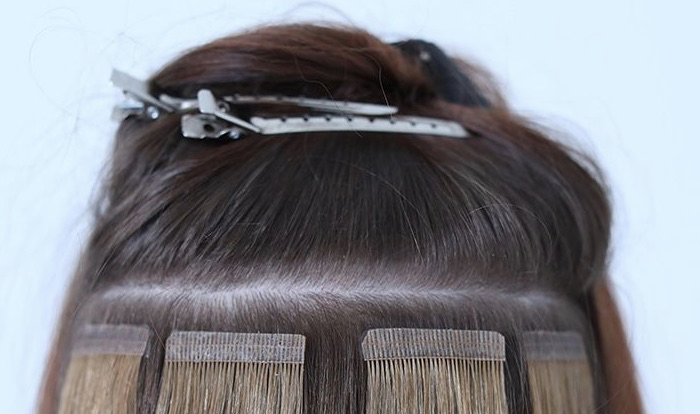 Wefts and tracks are also normally placed in such a way that they’re concealed by the direction in which hair falls. When tracks are placed in short or fine hair, placement toward the top of the crown is less likely.

In 2016, now-defunct site Gawker did an “investigation” into whether Trump was wearing hair extensions at the time. That piece included screenshots like the one above, which were also blurry and inconclusive: 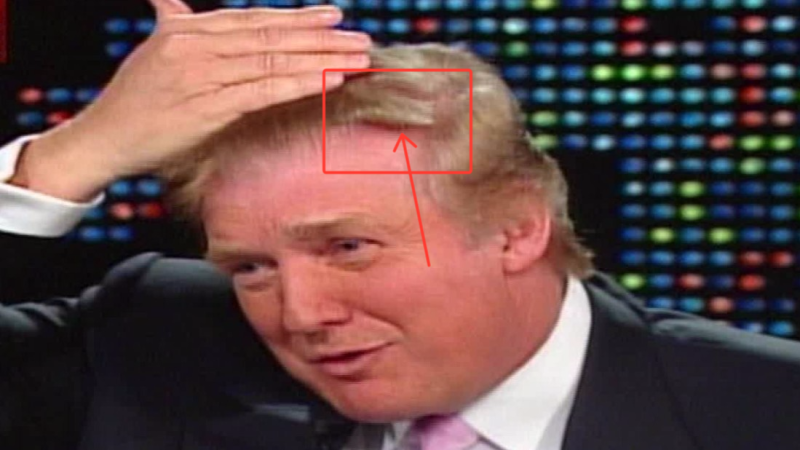 Other 2020 Versions of the Image

The image in the 2020 tweet also appeared in the comments of a Reddit thread in May 2016. Regardless of its explanation, it was neither from the September 2020 debate nor 2020 at all. In March 2020, a separate Twitter account shared the image as part of a set, claiming something was “exposed” on Trump’s head during a Fox News appearance:

Something was exposed on Trump’s head last night on Fox.

What do you think it is?

Again, the close up image in the bottom left corner was the one circulating in March 2016; it was not from any appearance in 2020. On March 9 2020, three days after the above tweet appeared, the image was one of several shared to a Facebook page: 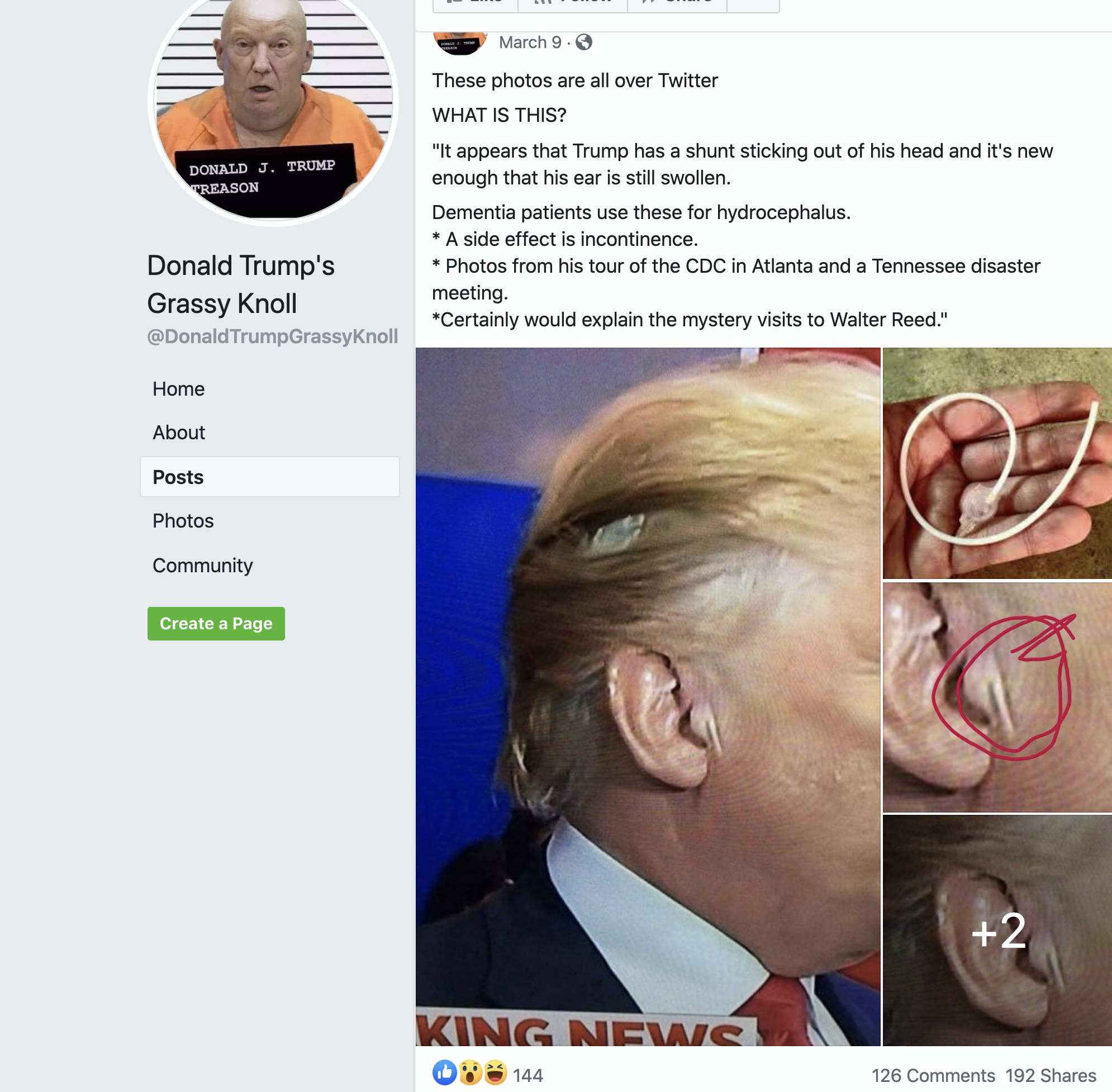 A status update that appeared with the photos speculated that the patch or “track” in the image of Trump’s hair was a “shunt”:

“It appears that Trump has a shunt sticking out of his head and it’s new enough that his ear is still swollen.

Dementia patients use these for hydrocephalus.
* A side effect is incontinence.
* Photos from his tour of the CDC in Atlanta and a Tennessee disaster meeting.
*Certainly would explain the mystery visits to Walter Reed.”

A popular tweet from March 5 2020 featured the same speculation:

There is a serious problem here…. Stitches? Shunt for an experimental drug? When you have what he has, you’ll try anything. @pesachlattin @SamSanderson123 pic.twitter.com/AAz0AWugFI

Tonight’s Fox News Town Hall: WTF is with Trump’s head? Is that a patch where the apply electroshock treatments? Is the human mask peeling away from the Reptoid skull? Why isn’t No Agenda analyzing this? from thedavidpakmanshow

Once again, the image was falsely labeled as a photo from 2020, although by then this point, the image had been circulating for four years. A March 9 2020 tweet contrasted the image with a photograph of a shunt, and suggested that a wrinkle next to Trump’s ear was part of the apparatus:

Why's this not been picked up by the media??! Trump has a shunt, most likely for hydrocephalus!! pic.twitter.com/yEmgCJtgJZ

We were unable to locate any credible information suggesting the object in Trump’s hair was a “shunt” of any sort, only ongoing and baseless social media speculation about the long-circulating photograph and possible explanations.

Moreover, all information we located [PDF] indicated that when a shunt is used, no portion of the device is visible outside the body:

… as the entire shunt is implanted either within the skull or under the skin, no components of the shunt are visible outside of the body. Recovery from a VP shunt placement takes about one to two days.

Therefore, any such device would not likely be visible.

A September 29 2020 debate night tweet featured an image from March 2016 or earlier, and did not show Trump’s hair during or before the debate — nor at any time in 2020. The image began circulating in March 2016 (or earlier), and was initially speculated to be a briefly visible hair extension track, then a shunt. In 2020, the image was falsely labeled as new in March and then again in September; while we don’t know what the photograph might show and do not wish to speculate, we can say with authority that it is not new as of 2020.