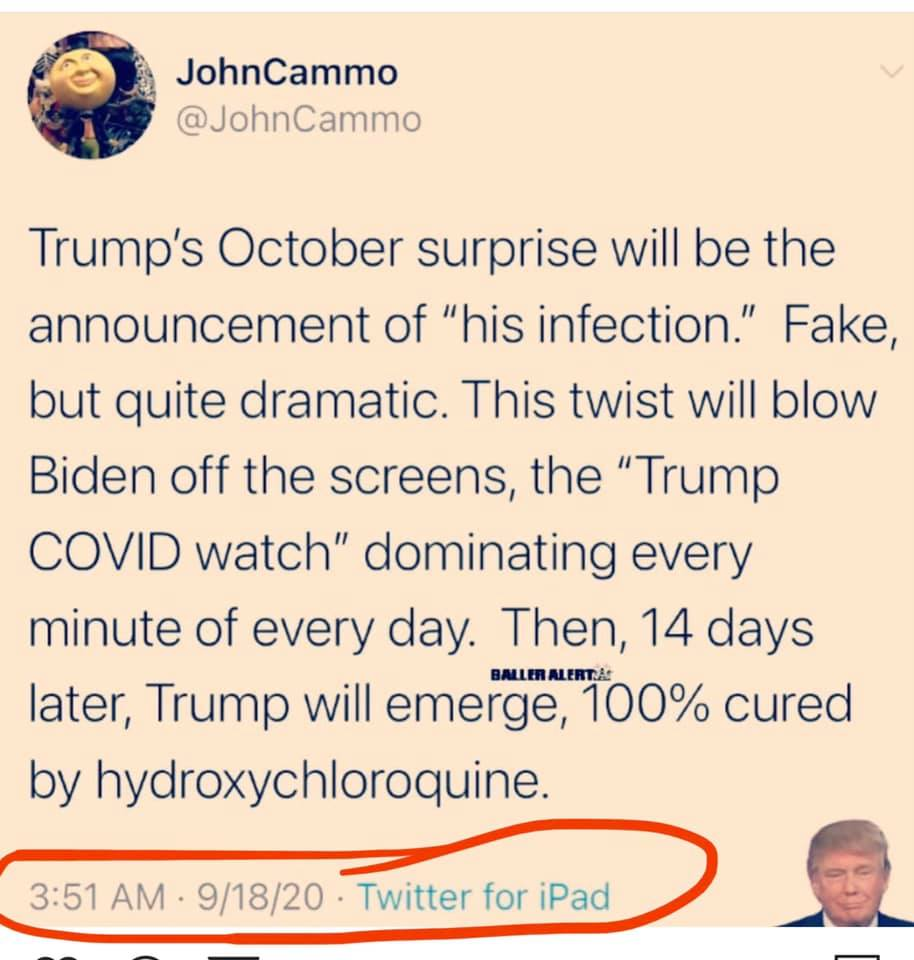 Attributed to user @JohnCammo, it read:

Trump’s October surprise will be the announcement of “his infection.” Fake, but quite dramatic. This twist will blow Biden off the screens, the “Trump COVID watch” dominating every minute of every day. Then, 14 days later, Trump will emerge, 100% cured by hydroxychloroquine.

Typically, the screenshots were not linked to an actual tweet. On occasion and as seen above, the date and timestamp of the tweet were circled.

Most Americans are familiar with the concept of an “October Surprise.” In American political parlance, the term is defined as follows:

In American political jargon, an October surprise is a news event deliberately created or timed to influence the outcome of an election, particularly one for the U.S. presidency, or sometimes an event occurring spontaneously that has the same effect. Because the date for national elections (as well as many state and local elections) is in early November, events that take place in October have greater potential to influence the decisions of prospective voters. Thus these relatively last-minute news stories could either completely change the entire course of an election or strongly reinforce the inevitable.

The term “October surprise” was coined by William Casey when he served as campaign manager of Ronald Reagan’s 1980 presidential campaign.[2] However, there were October election-upending events that predated the coining of the term.

A brief scan of @JohnCammo’s timeline didn’t immediately lead to the tweet seen in the screenshots, and it’s not uncommon for Twitter “predictions” to go viral, regardless of how true (or how real) they might actually be.

Twitter’s unique features exclude the ability to alter the content of a tweet directly, although on occasion seemingly impressive predictions are created through the tweeting and deleting of multiple prognostications, and then quietly deleting the incorrect ones.

On other occasions, they’re just strong inferences or off-the-cuff quips that end up suffused with meaning by later events. The former occurred after Kobe Bryant died in a helicopter crash:

An example of the latter transpired when FARK’s Drew Curtis seemed to predict an eventful 2020 — several years prior:

The original tweet from the @JohnCammo account was not easy to find after it generated significant interest on October 2 2020. But one user helpfully retweeted it:

The tweet was real, and it was accurately described:

Trump’s October surprise will be the announcement of “his infection.” Fake, but quite dramatic. This twist will blow Biden off the screens, the “Trump COVID watch” dominating every minute of every day. Then, 14 days later, Trump will emerge, 100% cured by hydroxychloroquine.

It was difficult to find in part because it was not a standalone tweet, but a reply to the following tweet:

Can't see everyone, obviously. But watching the video of the Wisconsin event it looks like virtually no one is wearing a mask and it's being held in a county that is in the midst of a major outbreak. Awesome.

Of note is that @JohnCammo did not just predict Trump’s infection, but ensuing events that have yet to take place as of October 2 2020, and which remain to be seen.

Twitter account @JohnCammo’s “October surprise” tweet about Donald Trump’s COVID-19 infection was real, and was indeed shared on September 18 2020. The tweet appeared two weeks before news of Trump’s positive test result broke late on the evening of October 1 2020, or early in the morning on October 2 2020 on the East Coast.