"There is now a massive library in Minecraft that's filled with uncensored articles, journals, and information from all over the world. It was created by a company called Blockworks, and, because Minecraft is accessible worldwide, the library offers a unique opportunity to people in censored countries to view censored materials in a safe environment."

On August 23 2021, an Imgur user shared the following meme, which describes a “censored library” that exists within the game Minecraft and explaining its purpose within the popular video game: 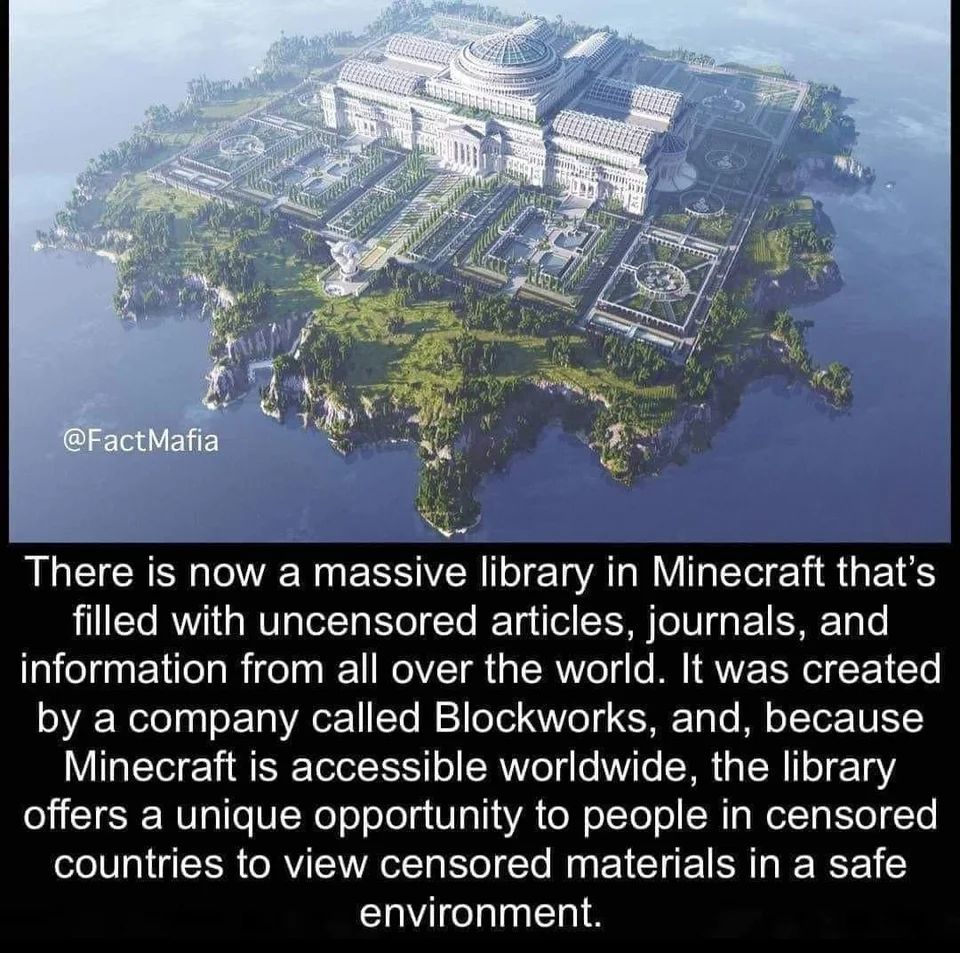 Text at the bottom of the meme read:

There is now a massive library in Minecraft that’s filled with uncensored articles, journals, and information from all over the world. It was created by a company called Blockworks, and, because Minecraft is accessible worldwide, the library offers a unique opportunity to people in censored countries to view censored materials in a safe environment.

A watermark for @FactMafia was on the meme; that account referenced an August 23 2021 thread on r/GamerSupremeRace. However, that thread also simply consisted of the meme:

Google’s reverse image search returned a little over three dozen variations of the meme, all of which appeared on or after August 20 2021. TinEye reverse search only retrieved 28 results, the oldest of which emerged in March 2020 on Reddit.

One was not an exact match:

But another in a similar subreddit was nearly identical; it lacked the @FactMafia watermark. As such, the meme began circulating in March 2020 or earlier:

Gamers are superior. from Damnthatsinteresting

On March 18 2020, tech site The Verge published an article about the uncensored library, five days after CNN reported on it, explaining:

Combined with the input from [German marketing agency] DDB’s research and outreach, Reporters Without Borders and Blockworks were able to analyze where Minecraft communities were particularly sizable, and subsequently match these results to countries suffering from a substantial degree of censorship. “For example, in Egypt there’s no free information,” Reporters Without Borders media and public relations officer Kristin Bässe tells me. Mexico is the country where journalists are most at risk, she adds, with governmental and cartel interference often culminating in the death of those voices deemed dissident. “It’s a different form of censorship,” Bässe explains. “People don’t want to publish because they’re scared they will be killed.”

In a virtual library found in Minecraft -— a game where users can build virtual worlds out of blocks and create their own storylines — users can access the work of journalists who have been killed, jailed or exiled by governments, including articles by Saudi journalist Jamal Khashoggi.

The project, launched by Reporters Without Borders, design collective Blockworks, advertising agency DDB Germany and production company MediaMonks, gives users access to articles banned in five countries that rank poorly on the nongovernmental organization’s World Press Freedom Index: Egypt, Mexico, Russia, Saudi Arabia and Vietnam … Work by Javier Valdez — a Mexican journalist who founded the Riodoce newspaper dedicated to crime and corruption and was killed by gunmen in 2017 — can also be read in the library, which creators call “a loophole to overcome censorship.”

Last year [in 2019], nonprofit group the Committee to Protect Journalists warned that at least 250 journalists were in jail in relation to their work as of 1 December [2019].

In many countries, websites, social media and blogs are controlled by oppressive leaders. Young people, in particular, are forced to grow up in systems where their opinion is heavily manipulated by governmental disinformation campaigns.

But even where almost all media is blocked or controlled, the world’s most successful computer game is still accessible. Reporters Without Borders (RSF) uses this loophole to bypass internet censorship to bring back the truth – within Minecraft.

On March 12 [2020], the “World Day Against Cyber Censorship”, The Uncensored Library opened its doors … Journalists from five different countries now have a place to make their voices heard again, despite having been banned, jailed, exiled and even killed.

Their forbidden articles were republished in books within Minecraft, giving readers the chance to inform themselves about the real political situation in their countries and learn the importance of press freedom.

That portion of the project’s site concluded with:

Support our fight against global cyber censorship by sharing this project with your friends:

On August 23 2021 a meme describing a “massive library in Minecraft that’s filled with uncensored articles, journals, and information from all over the world,” enabling “a unique opportunity to people in censored countries to view censored materials in a safe environment” appeared on Imgur and r/GamerSupremeRace. Those iterations did not include a citation — but outlets like The Verge and CNN reported on the project’s almost certainly overshadowed launch on March 12 2020. Under normal circumstances, news of the Minecraft uncensored library likely would have been more well-distributed, but the events of early March 2020 were chaotic and disruptive. According to The Uncensored Library’s website, the project was created to allow individuals in areas with little press freedom to access material reported by “journalists who have been killed, jailed or exiled by governments.”