The U.S. Postal Service has advised people hoping to vote by mail to request the required envelopes by October 20 2020.

Amid increasing concern over the United States Postal Service’s efficiency leading up to the 2020 U.S. elections, a CBS News host’s tweet warned voters seeking to take part by mail.

“USPS says you should give mail in ballots at least 14 days round trip,” Tony Dokoupil wrote on July 26 2020. “No guarantees. So if you plan to vote by mail, election day isn’t November 3rd. It’s October 20th. Or sooner. Don’t be one of the *tens of thousands* of people whose vote wasn’t counted in 2016.”

.@USPS says you should give mail in ballots at least 14 days round trip. No guarantees.

So if you plan to vote by mail, election day isn’t November 3rd.

Don’t be one of the *tens of thousands* of people whose vote wasn’t counted in 2016.

The postal service has in fact made that statement to not only Dokoupil but other news organizations and reporters; the advisory appeared in a Washington Post story published on July 15 2020:

Local elections offices are hiring temporary workers to process absentee ballots, and some local elections boards are adding options for voters to do curbside drop-offs of their mail ballots on Election Day.

The advisory was also mentioned in a story republished on news sites for local Fox TV network affiliates on July 27 2020:

“We recommend that jurisdictions immediately communicate and advise voters to request ballots at the earliest point allowable but no later than 15 days prior to election date,” USPS told FOX via email. “The Postal Service also recommends that voters contact local election officials for information about deadlines.”

Dokoupil himself reported on the potential problem for mail-in ballots in a story for CBS This Morning; CBS created two batches of 100 mock mail-in ballots apiece from around several zip codes in Philadelphia and sent them to the same local P.O. box, which served as a stand-in for an actual election office.

A week after sending his mock ballots from mailboxes around the city, Dokoupil went to retrieve them at the P.O. box to find that most of them were not inside. Postal staff later retrieved several of them, telling him that “they had them somewhere else.”

However, Dokoupil did note that official mail-in ballots carry an official logo differentiating them from the regular mail CBS used for its reporting. According to the story:

Out of the initial batch mailed a week earlier, 97 out of 100 votes had arrived. Three simulated persons, or 3 percent of voters, were effectively disenfranchised by mail by giving their ballots a week to arrive. In a close election, 3 percent could be pivotal.

Four days after mailing the second batch of mock ballots, 21 percent of the votes hadn’t arrived.

According to Postal Service recommendations, “voters should mail their return ballots at least one week prior to the due date.”

However, nearly half of all states still allow voters to request ballots less than a week before the election.

A USPS spokesperson, Martha Johnson, told us that the agency is asking both voters and election officials to be mindful of how long it takes postal workers to transport, process and deliver ballots as well as “the time that it takes for voters to consider and prepare their ballots, and the time that it takes for a ballot to be transported, processed, and delivered back to the election official.” The agency’s delivery standards, she said, have not changed. She also reiterated the agency’s guidance for requesting mail-in ballots:

We recommend that customers who opt to vote through the U.S. Mail must understand their local jurisdiction’s requirements for timely submission of absentee ballots, including postmarking requirements. Voters must use First-Class Mail or an expedited level of service to return their completed ballots. In order to allow sufficient time for voters to receive, complete and return ballots via the mail, and to facilitate timely receipt of completed ballots by election officials, we strongly recommend that jurisdictions immediately communicate and advise voters to request ballots at the earliest point allowable but no later than 15 days prior to the election date. The Postal Service recommends that domestic, non-military voters mail their completed ballots back to the election officials at least one week prior to their state’s due date. The Postal Service also recommends that voters contact local election officials for information about deadlines.

Tammy Patrick, a senior advisor for the advocacy group Democracy Fund, told CBS that her group estimated that between 80 million and 100 million United States voters would receive their ballots via mail in 2020. Prior to joining the non-profit organization, Patrick served on the Commissioner on the Presidential Commission on Election Administration under Barack Obama’s presidential administration.

“States like Ohio, you can request your ballot on Saturday up until noon for Tuesday’s election,” said Patrick, who has also served as a former federal compliance officer for the elections department in Maricopa County, Arizona. “That is the worst possible thing. You are setting up the voters with false expectations, and you’re setting them up to fail.”

A separate analysis published by NPR in July 2020 found that 65,000 absentee or mail-in ballots cast in primary elections until that point had been rejected because they arrived after the deadline.

“That’s the sort of thing that makes me wary about what’s going to happen in November when we get an even larger influx of people who haven’t voted, or haven’t voted by mail in the past,” said Charles Stewart, a political scientist at the at the Massachusetts Institute of Technology.

Obama himself added to the discussion about mail-in voting on July 28 2020, when he tweeted a graphic supplied by another group, Vote Save America, displaying the state-by-state deadlines for requesting a ballot. According to that graphic, the deadline for every state not exclusively voting by mail falls after the fifteen-day advisory issued by the U.S. Postal Service: 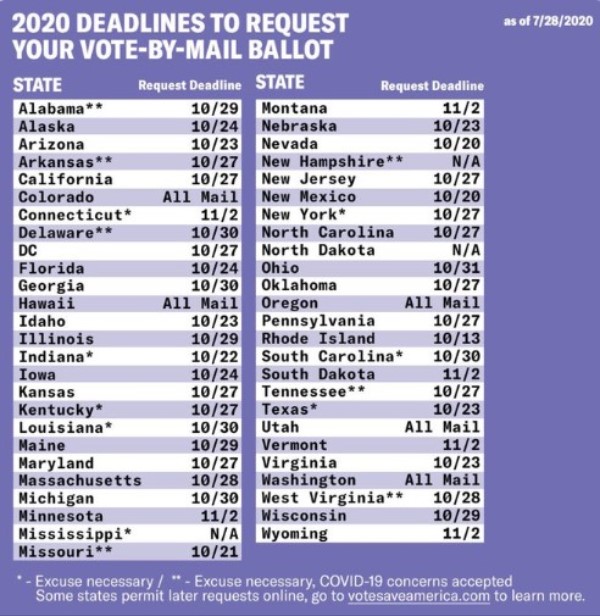 The USPS told CBS in a statement:

We employ a robust and proven process to ensure proper handling of all Election Mail, including ballots. This includes close coordination and partnerships with election officials at the local and state levels. As we anticipate that many voters may choose to use the mail to participate in the upcoming elections due to the impacts of the COVID-19 pandemic, we are conducting and will continue to proactively conduct outreach with state and local election officials and Secretaries of State so that they can make informed decisions and educate the public about what they can expect when using the mail to vote. As part of these outreach efforts, we will discuss our delivery processes and will consult with election officials about how they can design their mailings in a manner that comports with postal regulations, improves mailpiece visibility, and ensures efficient and cost-effective processing and delivery.

Dokoupil’s story also followed reported concerns over the appointment of Louis DeJoy — a businessman and fundraiser for U.S. President Donald Trump — to oversee the USPS as Postmaster General in June 2020.

“On the surface, there’s a real worry about cronyism and patronage and whether someone is being put into place to carry out an agenda,” American Postal Workers Union president Mark Dimondstein told the Post. “We hope that’s not the case.”

DeJoy told employees to leave mail behind at distribution centers if it delayed letter carriers from their routes, according to internal USPS documents obtained by The Washington Post and verified by the American Postal Workers Union and three people with knowledge of their contents, but who spoke on the condition of anonymity to avoid retribution.

“If the plants run late, they will keep the mail for the next day,” according to a document titled, “New PMG’s [Postmaster General’s] expectations and plan.” Traditionally, postal workers are trained not to leave letters behind and to make multiple delivery trips to ensure timely distribution of letters and parcels.

Trump himself has repeatedly claimed — falsely — that voting by mail is inherently suspect and vulnerable to fraud, to the point that Twitter flagged two of his tweets on the issue in May 2020 for containing “potentially misleading information.”