When Volvo invented the three-point seat belt in 1959, they made the patent free for all competitors to use in order to save lives, because "it had more value as a free life-saving tool than something to profit from."

On June 27 2021, the Facebook page “FACT” shared a meme about Volvo, the three-point seat belt, and how the feature purportedly became so common: 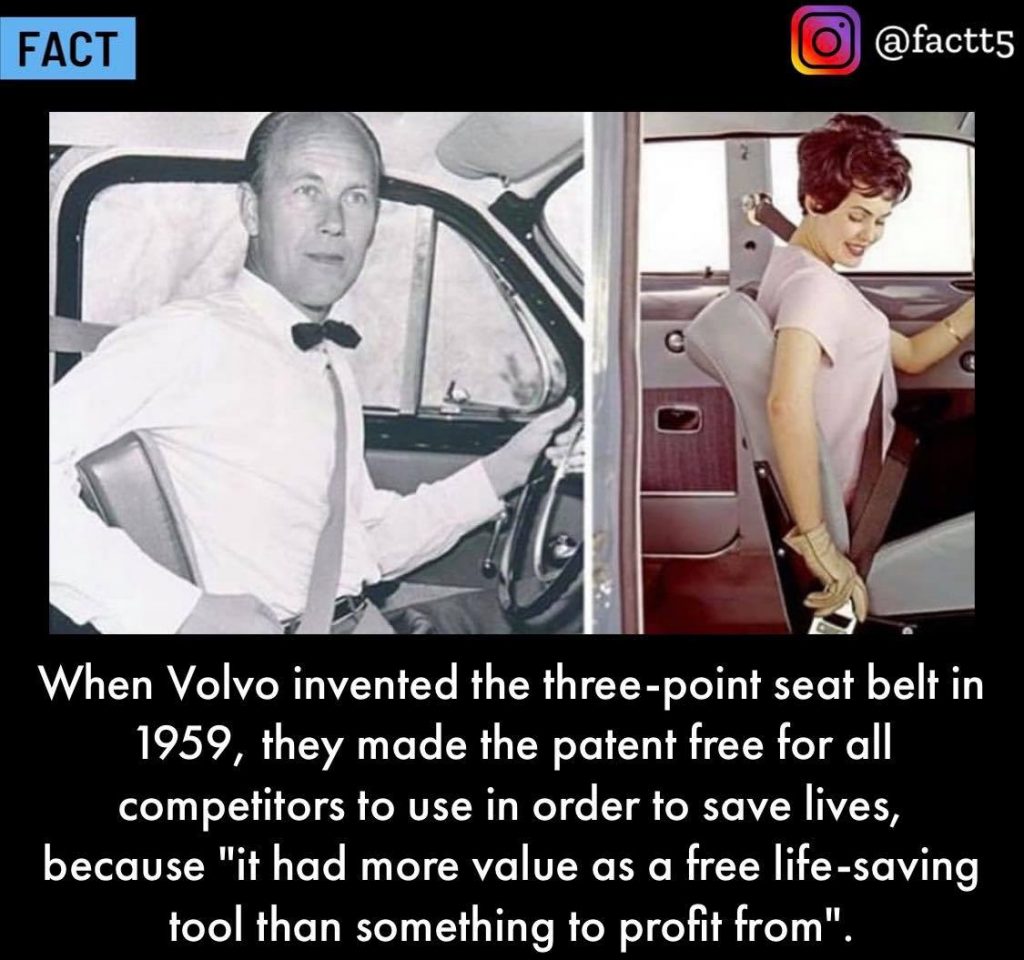 Text underneath what looked like vintage photographs of drivers in vehicles read:

When Volvo invented the three-point seat belt in 1959, they made the patent free for all competitors to use in order to save lives, because “it had more value as a free life-saving tool than something to profit from”.

Although the meme contained quoted text, no source for the quote was provided. No links to supporting information appeared alongside the post, either.

A search for the text in quotes turned up an April 2019 post from r/todayilearned, titled “TIL that Volvo opened up the patent for three-point seatbelt cause ‘it had more value as a free life saving tool than something to profit from'”:

Another result was an article on automobile-centric site Jalopnik, from August 2013 (“Volvo Gave Away Their Most Important Invention To Save Lives”). It read in part:

It’s hard to believe now in this age of lane-departure warning systems and radar-guided automatic braking, but once upon a time, safety in cars was kind of an afterthought. Volvo built their reputation on selling safer cars, but they gave away the most important safety device ever invented: the three-point seat belt.

It was a revolutionary invention, and one that probably could have netted Volvo a fortune on patents alone.

But Volvo didn’t do that — they gave the patent away because they decided it was too important to keep to themselves.

Jalopnik cited British auto site ArnoldClark.co.uk’s report, “Why Volvo gave away the patent for their most important invention,” which was the source of the text quoted in the title of the Reddit post and on the meme:

The reason the three-point seatbelt is so widely adopted is actually because Volvo opened up the patent so that any car manufacturer could use it in their design. They decided that the invention was so significant, it had more value as a free life saving tool than something to profit from.

Volvo’s managing director Alan Dessell is quoted as saying: “The decision to release the three-point seat belt patent was visionary and in line with Volvo’s guiding principle of safety.”

In other words, the phrasing in the quoted portion was not something Volvo’s executives said in 1959; instead, it originated in a 2013 retrospective about the history of the three-point seatbelt.

A base claim that the innovation originated with Volvo appeared on a 2010 History.com entry for July 10 1962, “U.S. patent issued for three-point seatbelt”:

On August 17, 1959, [Swedish engineer Nils] Bohlin filed for a patent in the United States for his safety belt design. The U.S. Patent Office issued Patent No. 3,043,625 to “Nils Ivar Bohlin, Goteborg, Sweden, assignor to Aktiebolaget Volvo” on July 10, 1962. In the patent, Bohlin explained his invention: “The object… is to provide a safety belt which independently of the strength of the seat and its connection with the vehicle in an effective and physiologically favorable manner retains the upper as well as the lower part of the body of the strapped person against the action of substantially forwardly directed forces and which is easy to fasten and unfasten and even in other respects satisfies rigid requirements.”

In 2019, Car and Driver covered the introduction of the three-point seatbelt, explaining:

Volvo even took out an open patent on the belt design, but it would not enforce any patent violations or charge others royalties to use its three-point belts. This early open-sourcing of its technology hasn’t slowed; Volvo recently announced that it will share its crash research and computer modeling with universities, researchers, and even other automakers so that others can learn from and build on its developments. As Volvo puts it, the company has “continued to prioritize societal progress over financial gain alone.”

Even farther back, in 2009, Volvo reiterated the often-documented history of the three-point seatbelt in a commemorative press release:

As confirmation of its effectiveness, Bohlin’s invention has been identified by German patent registrars as one of the eight patents to have the greatest significance for humanity during the hundred years from 1885 to 1985. Bohlin shares this honour with patent-holders such as Benz, Edison and Diesel.

In 1958 his work resulted in a patent application for Nils Bohlin’s three-point belt. What Bohlin integrated into his design, and which he regarded as most important for a car safety belt, were four golden rules: the belt consisted of both a hip or lap belt and also a diagonal belt across the upper body, which was positioned correctly from the physiological viewpoint. That is to say across the pelvis and the ribcage, and attached at a low anchorage point beside the seat. The belt geometry formed a “V” with the peak pointing down towards the floor. In addition, the belt stayed in position and did not move when it was under load.

This is the crucial difference between the effective V-shaped belt according to Bohlin’s design and the previous three-point design of Y-type (Griswold). Bohlin’s belt was in fact an effective demonstration of geometrical perfection rather than a cutting-edge innovation. The solution and the benefits of the three-point design soon spread throughout the world since Volvo immediately made Bohlin’s patent available to all car makers.

A viral Facebook post claimed that when “Volvo invented the three-point seat belt in 1959, they made the patent free for all competitors to use in order to save lives.” The meme quoted, but did not cite, a 2013 article headlined, “Why Volvo gave away the patent for their most important invention.” Volvo’s role in both introducing the three-point seatbelt and providing the patent to all automakers was well-documented, and frequently revisited by automobile news sites on the anniversary of its invention and patent distribution.