Walmart is going "plastic bag free" in 2021, and to celebrate it is giving away gift bags and $75 "vouchers."

On March 23 2021, a purported (and popular) Walmart post circulated on Facebook, promising a “$75 voucher” and pledging Walmart would “go plastic bag free” in 2021.

That post was intermittently accessible and formatted as an album. A short description for the album claimed:

To celebrate the great news of Walmart becoming plastic bags free by the end of 2021, we are giving one of these Walmart gift-bags to everyone who has shared & commented in the next 24hrs. Each person who does this will receive one of these gift bag full of goodies and a $75 Walmart voucher.

Usage of the term “voucher” (versus the more common “gift card” in the United States) was the first of many clues the page was created by scammers. Another was that no other content appeared on the page itself; on Facebook, the visible user name was @uswalmart1, and the page was unverified.

Nevertheless, the post received strong engagement and spread quickly, as evidenced by a high share count. Note that the grammar in the title was also not standard and “plastic bag free” would be likelier syntax for an American reader: 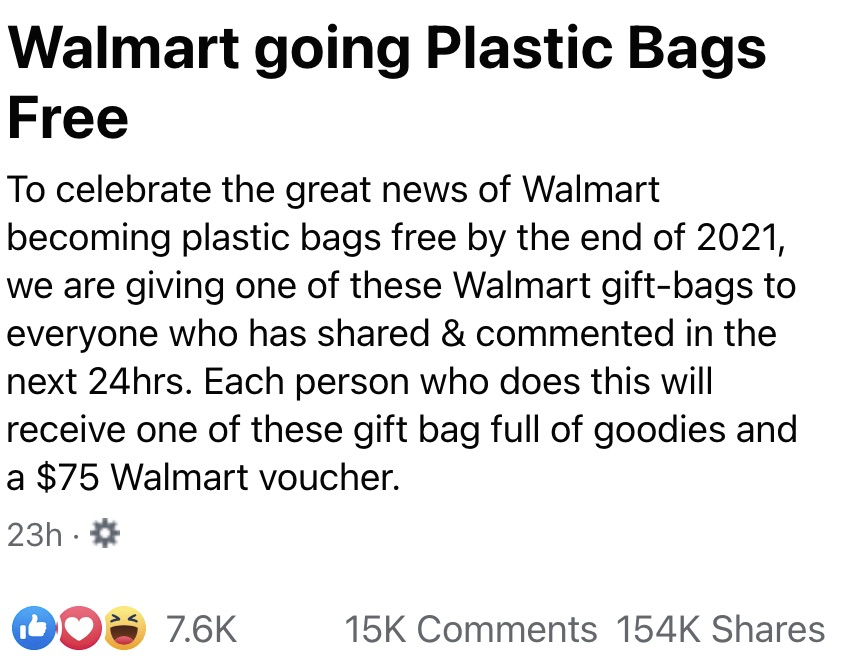 Perhaps the biggest visual clue, however, was a series of images quite poorly edited to look like an announcement photograph: 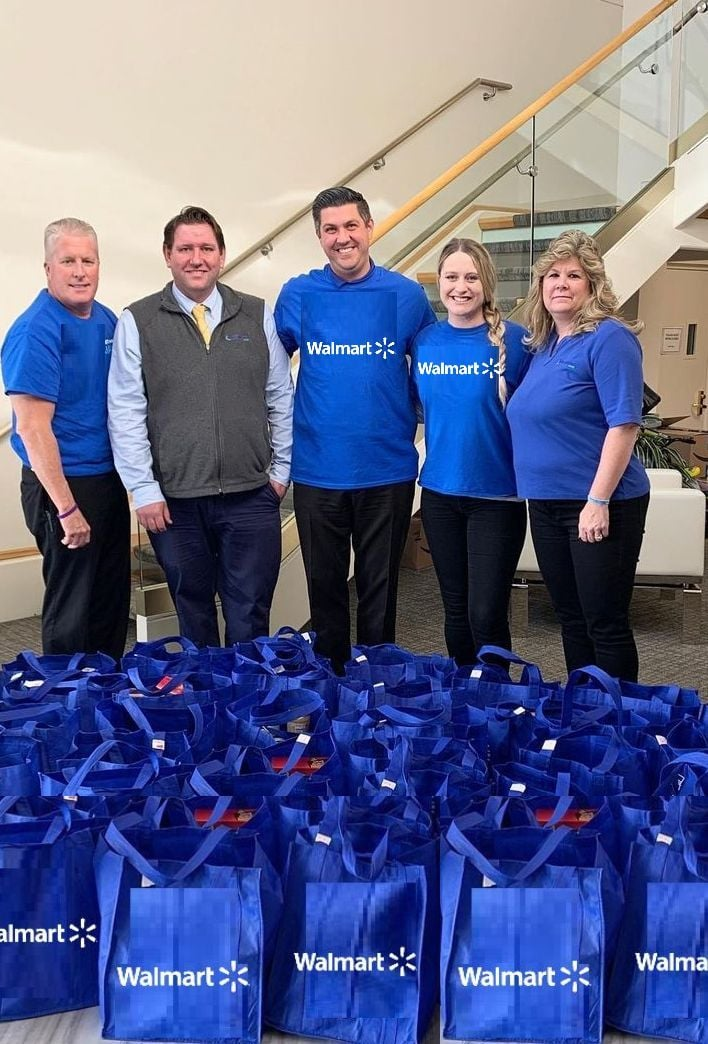 Three of the five people in the image wore pixellated blue shirts with a “Walmart” logo hastily edited in, and with awkward placement. The five people stood in front of what were presumably the “gift bags,” all of which again had Walmart logos edited on to them with no attempt made whatsoever to minimize the pixellation.

As for whether the scam was successful, Google Trends offered insight into the post’s popularity. A search for related terms revealed “Breakout” levels of interest for the following terms between March 23 and 24 2021:

A search for whether Walmart was “going plastic bag free in 2021” returned no indication the retailer had made any such promise, nor initiated an giveaway to celebrate it. A February 22 2021 Walmart “Newsroom” blog post bearing the title, “Somewhere Beyond the Plastic Bag Lies the Future of Retail” suggested that Walmart was exploring a reduction in plastic bags — but that appeared to be a nascent and nebulous initiative as of March 2021:

Last summer [in 2020], we set out on the path to look beyond the plastic retail bag and identify solutions that could serve a similar function, while delivering convenience for customers and lessening the environmental impact. Through our engagement in the Beyond the Bag Initiative, and our own endeavors in Mexico and Vermont, we’re working hard to accelerate the pace of innovation and viable, sustainable solutions.

Walmart would have likely disclosed its plans to phase out plastic bags in that announcement if it had any, but it did not. Subsequent portions of the post suggested that one state (Vermont) was starting a “pilot” program, and that Walmarts throughout Mexico (and possibly Central American countries) were “going bagless”:

Walmart Mexico y Centroamerica is going bagless. As regulations continued changing, we knew we’d have to stop offering plastic bags. But instead of offering yet another single-use solution, we made the decision to go fully bagless and encourage our customers to look to reusable bags. By the end of December 2020, over 72% of our stores in Mexico weren’t providing plastic bags.

We’ve just launched a bagless pilot in Vermont that underlines our commitment to achieving zero waste and ultimately moving toward a circular economy where the materials we use stay in use. With 78% of our Vermont customers supporting bagless options, this is an opportunity to understand how we can meet their needs and honor our commitment to sustainability. Key learnings from the final outcome of the pilot will be used to determine future direction for our company’s bagless efforts.

Social media users have been sharing posts online that claims Walmart is giving away a bag full of groceries and a $75 voucher if users comment and share the post.

Rebecca Thomason, a spokeswoman for Walmart, confirmed to Reuters via email that the pages and posts about gift cards for the 60th anniversary are all false.

With 150,000 shares and counting, many readers likely saw the “Walmart going Plastic Bags Free” giveaway scam on Facebook on March 23 and 24 2021. The post was clearly fake, and Walmart had recently confirmed that the “gift bag and $75 voucher” posts circulating were false. As noted on similar fact checks, engagement with posts like the Walmart “plastic bag free” scam enabled scammers to gather massive followings using Facebook, and then use the data and information they are able to siphon up to execute progressively larger grifts.