In March 2021, screenshots of a tweet attributed to “Kent State gun girl” Kaitlin Bennett began circulating in which Bennett interpreted the song “WAP,” an explicit and sexually provocative song that has become grist for the far-right performative outrage mill, as “white American privilege”: 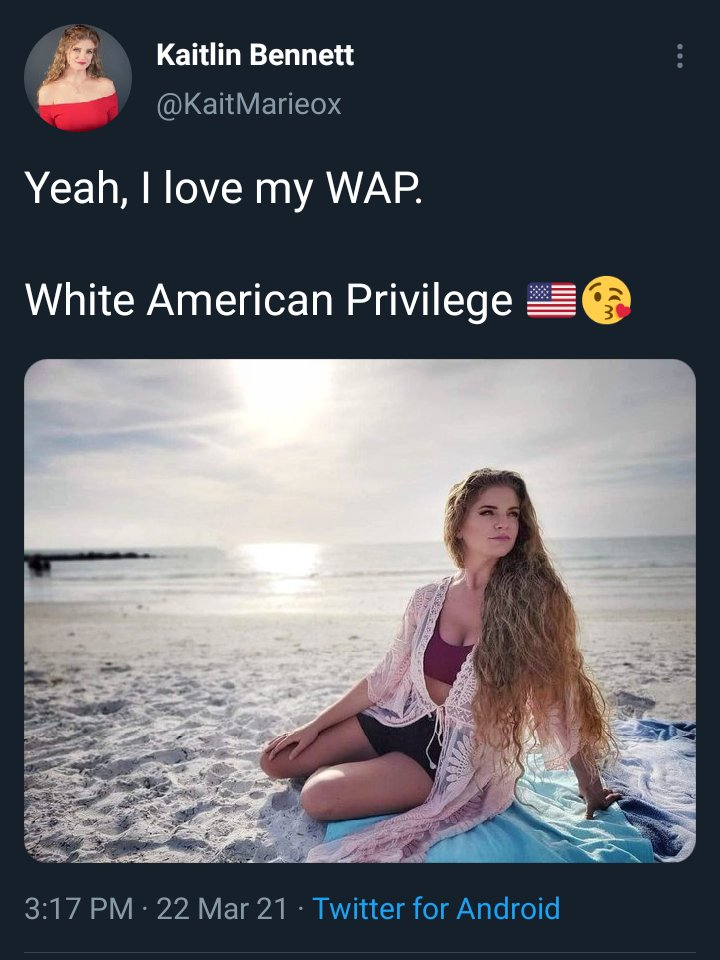 In the Facebook comments above, a top-level commenter said of the screenshot:

This is a fake account, she’s a terrible person don’t get me wrong, but she didn’t say that

You sure about that? I’ve never seen anything to suggest “kaitmarieox” is anyone other than Kaitlin Bennett.

Another version of the tweet was shared to (and later deleted from) the subreddit r/ToiletPaperUSA — to which we have linked in the past in the course of other fact-checks around “parody” content and conservative media personalities. Some content shared to r/ToiletPaperUSA has prompted confusion over more than one viral post attributed to a specific group of commentators (typically far right “personalities” and their organizations, such as Ben Shapiro, PragerU, Charlie Kirk, and TurningPointUSA):

She s got the WAP from ToiletPaperUSA

In that version (for which cached versions still exist), the tweet was edited (or further edited) to reference a popular meme about Bennett purportedly defecating in her pants at a college party:

In an attempt to gauge interest in the veracity of the tweet attributed to Bennett, we searched Google Trends data for the week ending March 24 2021. Most related searches were not to do with the tweet about the song  “WAP,” but rather whether Bennett had legitimately soiled herself at a fraternity party in college:

Although “White privilege” and “Social privilege” were listed under “Related topics” (along with “Feces – Topic”), “Related queries” told a different story. They included:

As for the “WAP … White American Privilege” tweet, we were able to quickly track down the original version, the original of which we easily found using the @KaitMarieox handle seen in the screenshots:

Yeah, I love my WAP.

Due to the popularity of screenshots of the tweet versus direct links, some confusion over whether it was real and attributable to Bennett ensued. The tweet was real; Bennett shared it on March 22 2021.