A screenshot from Tumblr showed a bookstore’s shelf with a placard for “Freedom to Read Week” (an annual event in Canada), denoting a particular book as having been “challenged,” “seized,” “banned,” or “burned.” 1984 was marked as “banned” in “USSR,” “China,” and “United States.” 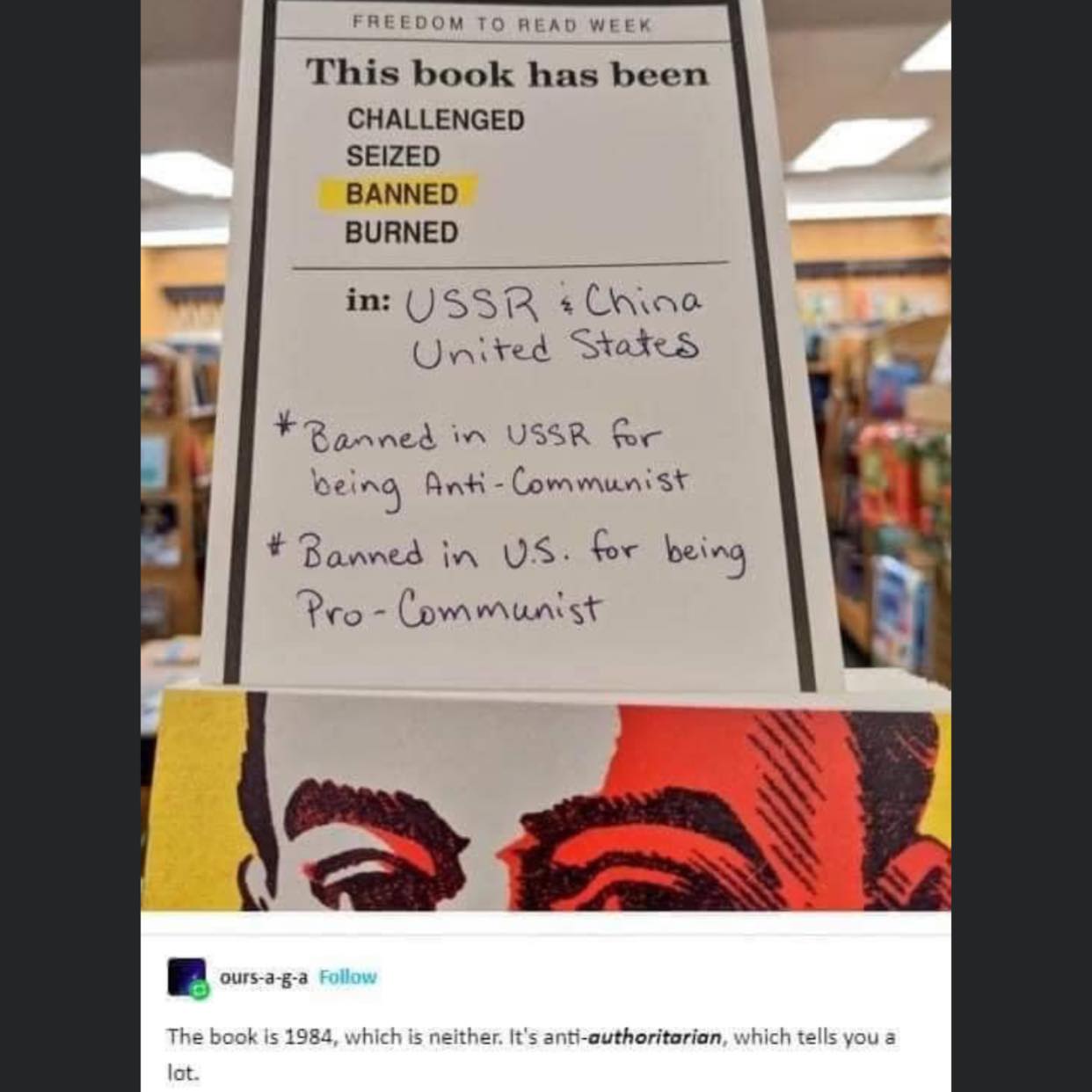 At the bottom of the image, Tumblr user ours-a-g-a commented:

The book is 1984, which is neither. It’s anti-authoritarian, which tells you a lot.

I’m surprised to learn that it’s banned in the US, as I own several copies and have yet to be un-personed.

A reverse image search located an earliest crawled iteration on Tumblr from March 2 2021; that timing was consistent with Canada’s annual Freedom to Read week:

An initial search for claims that the book 1984 was banned in the US and USSR for conflicting reasons led to a January 2017 post on StackExchange’s “Literature” forum:

Is there any analysis where this apparent contradiction is explained?

Others on the forum discussed the initial claim, and one comment alluded to some oversimplification of the issue, at least regarding the United States; the meme was not referenced:

In the case of the US, it was usually individuals or small groups of individuals responsible for local bans. These bans were often raised, for example, by parents against school districts. The US itself can’t ban books (with love: the First Amendment), and frequently overturns school boards on this point (it’s a blog, but it’s a case law blog). Instead of a national law, specific school boards, like the one in Jackson County, FL, banned the consumption of these books. (It’s also on the ALA’s frequently-challenged books list.) So it was on a far more individual, county-to-county basis.

A September 30 2020 “Banned Books Week” post on the University of California Press blog addressed 1984 among other “banned books,” echoing the 2017 comment excerpted above. Among causes for bans on that title, “sexual content” was cited:

Why it was banned: George Orwell’s 1984 has repeatedly been banned and challenged in the past for its social and political themes, as well as for sexual content. Additionally, in 1981, the book was challenged in Jackson County, Florida, for being pro-communism.

Banned by the Soviet Union in 1950, as Stalin understood that it was a satire based on his leadership. It was not until 1990 that the Soviet Union legalised the book and it was re-released after editing.

Several entries appeared in the section for the United States, among them Uncle Tom’s Cabin and Canterbury Tales. That particular section included regional bans, such as Pedagogy of the Oppressed, which was banned in Tucson, Arizona as part of a larger, unconstitutional attack on ethnic studies programs there. However, no such regional ban of 1984 was mentioned.

In September 2018, Time.com listed 1984 in a slideshow about censored books, reporting:

It’s both ironic and fitting that 1984 would join the American Library Association’s list of commonly challenged books given its bleak warning of totalitarian censorship. Written in 1949 by British author George Orwell while he lay dying of tuberculosis, the book chronicles the grim future of a society robbed of free will, privacy and truth. Some reviewers called it a veiled attack against Joseph Stalin and the Soviet ruler’s infamous “midnight purges,” though, oddly enough, parents in Jackson County, Florida, would challenge the book in 1981 for being “procommunist.” The book spawned terms like Big Brother and Orwellian and continues to appear in pop culture — most recently as the inspiration for a political YouTube hit. The year 1984 may have passed, but the book’s message remains as relevant as ever.

In March 2013, the book was mentioned on a similar Telegraph list of banned books; the USSR was mentioned along with the United States:

George Orwell’s 1949 vision of a dystopian future, where all human activity is monitored and independent thought is entirely suppressed, was banned by the American Libraries Association for being a “bleak warning of totalitarian government and censorship”. Ironically, despite the book being labelled pro-Communist, it was also banned in the USSR for implicitly criticising the Soviet regime.

As was the case with the United States, a 2020 Associated Press article described 1984’s status in China as primarily unbanned, or only intermittently banned:

Although “1984” and “Animal Farm” were removed from a rural school, they are still available from stores and online in China.

A Facebook screenshot suggesting that 1984 had been banned in the U.S. for being pro-communist and in the USSR for being anti-communist first appeared as an image on Tumblr in early March 2021, not long after Canada’s annual Freedom to Read week. Its claims were something of an over-simplification, as the United States’ “ban” of 1984 appeared to be an outlier. The book was “unbanned” in Russia, and is largely available to read in China as of 2021.