After a facility refused to administer a test to right-wing pundit and disinformation purveyor Candace Owens, she said she would just cough on her hand and shake many hands.

On September 3 2021, an Imgur user uploaded a purported tweet by right-wing pundit and frequent disinformation purveyor Candace Owens, quoting her as saying if  “a leftist doctor” refused to administer a test, she would cough in her hand and “give as many handshakes” as she could: 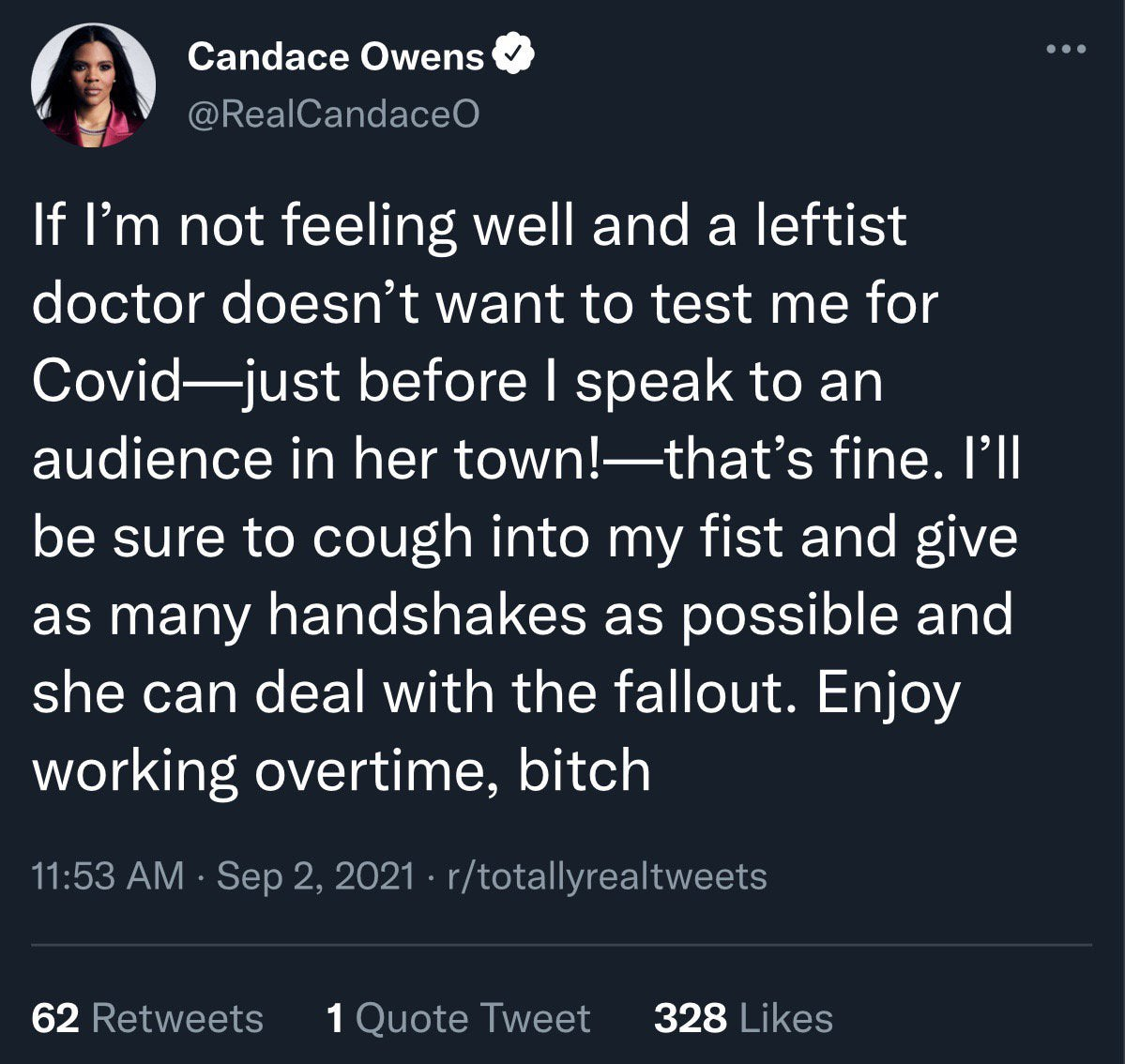 If I’m not feeling well and a leftist doctor doesn’t want to test me for Covid — just before I speak to an audience in her town! — that’s fine. I’ll just be sure to cough into my fist and give as many handshakes as possible and she can deal with the fallout. Enjoy working overtime, bitch

One “tell” was in the screenshot, but we will cover some of the background first.

What’s Going on with Candace Owens and Covid Testing?

On September 1 2021, Owens tweeted about an appointment cancelation email she received:

Holy crap!! I just received an e-mail from a Covid testing facility that they are REFUSING to administer a test to me because they don’t like my politics.
INSANE. I’m banned from making sure I don’t accidentally spread Covid? Going live with the e-mail on Instagram in 10 mins!

As promised— here is the email from the rabid activist declining to give me a test, plus my response to her. She clearly isn’t stable enough to work in health and is a danger to the Aspen community. pic.twitter.com/nV7xMGqVN3

In the second tweet, the first of two images was a screenshot from a Suzanna Lee to Owens, with the subject line “Appointment cancelation notice.” Lee wrote:

I’ve just learned of this testing request and as the owner of this business am going to refuse this booking and deny service. We cannot support anyone who has pro-actively worked to make this pandemic worse by spreading misinformation, politicizing and DISCOURAGING the wearing of masks and actively dissuading people from receiving life-saving vaccinations.

The only other local testing option is the free kiosk by city hall. They mail their tests to Texas and have inconsistent result times, do not take appointments so its walk in only midday weekdays in their back alley.

My team and myself have worked overtime, to exhaustion, unpaid and underpaid this past year, spending our own capital to ensure that our community remains protected. It would be unfair to them and to the sacrifices we have all made this year to serve you.

Owens appeared to be livid over the response, hosting an Instagram Live to discuss her feelings; the underlying conflict between Owens and a clinic was widely reported and real.

First we checked Owens’ recent tweets (with replies), and did not see the purported tweet listed.

A visit to Archive.is turned up a number of tweets by Owens, likely saved by others in the event the tweets were deleted. Content in the purported tweet was such that it would likely have been archived, but it did not appear there either.

A search for two short excerpts from the tweet (“Leftist doctor” and “test me for Covid”) was helpful. Had the tweet been real, its text would appear as cached Google content — but the only two results were meme sites where the image alone had been automatically transcribed.

We visited r/totallyrealtweets on Reddit, but did not see the Candace Owens tweet there; the sub was not very active.

In previous pages, we’ve mentioned the subreddit r/ToiletPaperUSA — a subreddit satirizing personalities like Ben Shapiro, Charlie Kirk, Prager U, Kaitlin Bennett, and Owens. Content from that subreddit was frequently decoupled from its source, and context about its satirical nature often stripped away in the process.

On September 3 2021, one hour prior to the tweet’s appearance on Imgur, a thread titled “Candace Owens Will Have Her Revenge on Aspen” was shared to the subreddit. On “old” Reddit, the “Fake News” flair denoting falsified content was appended to the image; however, in the embed below it’s not visible:

Candace Owens Will Have Her Revenge on Aspen from ToiletPaperUSA

On September 3 2021, a tweet attributed to Candace Owens was shared to Imgur, reading: “If I’m not feeling well and a leftist doctor doesn’t want to test me for Covid — just before I speak to an audience in her town! — that’s fine. I’ll just be sure to cough into my fist and give as many handshakes as possible and she can deal with the fallout. Enjoy working overtime, bitch[.]” Some Imgur commenters described the tweet as “fake,” but it was not labeled as such and presented as authentic. Owens’ feud with a clinic in Colorado was real, and she did angrily tweet about being denied. But the “cough in my fist” tweet was satire from r/ToiletPaperUSA.