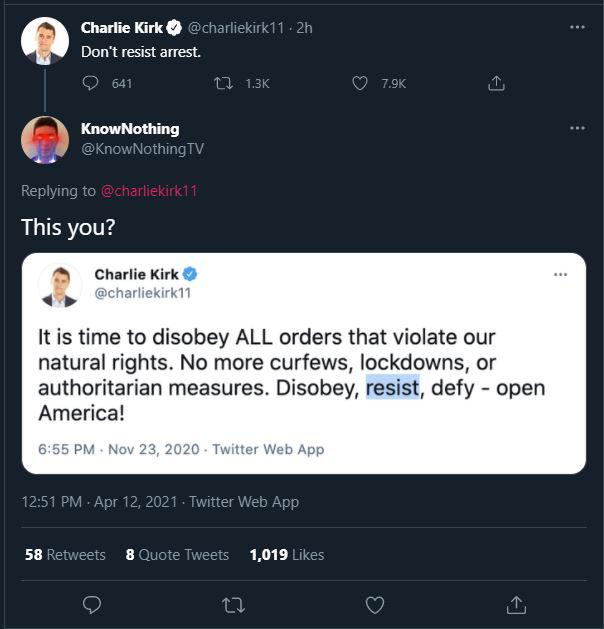 In the screenshot, @KnowNothingTV employed the Twitter text meme “This you?”

KnowYourMeme.com explains that particular rhetorical device, its origins, and the manner in which it is used, particularly on Twitter:

This You? or Ain’t This You? is a catchphrase used on Twitter to call out the hypocrisy of a certain tweet with a screenshot of a past tweet. The trend began in June 2019 but became more popular in May 2020 during the coronavirus pandemic and the George Floyd protests. Popular instances were typically targeted at brands, politicians and celebrities.

There was a particularly illustrative example of the “This you?” Twitter meme in August 2020, after the death of prominent conservative Herman Cain. His Twitter account remained active after his demise, and occasionally featured content downplaying the severity of the exact virus responsible for Cain’s death.

In one viral response to Cain’s posthumous tweeting, a Twitter commentator paired the phrase with an image:

“This you?” became a common response to tweets deemed hypocritical or otherwise in direct contrast to other statements made by the target of the commentary. As for the “This you?” tweet involving Kirk, it was originally published on April 12 2021, and purportedly demonstrated hypocritical or contradictory statements on Twitter specifically by Kirk:

As we have noted on several previous pages, Kirk is one of a few specific targets of satirical content shared to the popular parody subreddit r/ToiletPaperUSA, which primarily focuses on Kirk and fellow travelers Ben Shapiro and PragerU.

Out-of-context content from r/ToiletPaperUSA is often mistaken for authentic social media content by the subreddit’s most commonly mocked commentators:

Did Ben Shapiro Tweet That He and His Wife Know There Are More Important Things in Marriage Than ‘Sexual Satisfaction’?

Some of the content produced by that subreddit is sufficiently subtle to bypass readers’ nonsense detectors:

We have done several fact-checks involving memes that originally appear on r/ToiletPaperUSA — where it is clearly marked as satire — to other subreddits, and from there to other social media platforms.

By contrast, the screenshot of the earlier tweet purportedly showed Kirk urging followers at length to “disobey” and “resist” orders.

We used Twitter Advanced Search, inputting Kirk’s Twitter handle (@charliekirk11) and the word “disobey,” in an attempt to locate the November 2020 tweet. It returned no results. Subsequently, we replaced “disobey” with “resist,” after manually locating the April 12 2021 “Don’t resist arrest” tweet embedded above — clearly live, and clearly real. However, we ran into the same issue with that search, which located neither tweet:

[Update, April 13 2021, 3:26 PM: A reader tip advised switching to the “Latest” tab, versus the “Top” tab which displays by default. Under “Latest,” a both of Kirk’s tweets appeared, alongside additional tweets.]

Based on Twitter Advanced Search, it appeared that Kirk had never tweeted urging followers to “disobey” authority figures. But the “resist” lack of results suggested that for whatever reason, Twitter Advanced Search was not working as expected — a problem we encountered earlier in April 2021, and one which hinders fact-checking.

We then turned to Google and searched Kirk’s handle alongside a phrase from the tweet (“natural rights”)’; Kirk’s screenshotted November 2020 tweet was the fourth result:

It is time to disobey ALL orders that violate our natural rights. No more curfews, lockdowns, or authoritarian measures. Disobey, resist, defy – open America!

It is time to disobey ALL orders that violate our natural rights. No more curfews, lockdowns, or authoritarian measures. Disobey, resist, defy – open America!

Both tweets referenced in the tweet and Imgur post were real, and correctly attributed to Charlie Kirk.

On April 12 2021, right-wing activist Charlie Kirk tweeted “Don’t resist arrest,” leading to @KnowNothingTV’s usage of the “This you?” meme to critique Kirk for contradictory messages. Twitter Advanced Search did not initially return either tweet, but Google search turned them both up, demonstrating that the older tweet, like the newer one, was real and unaltered.