"More people have died of COVID in Florida in the past two weeks than U.S. military deaths in Afghanistan in 20 years."

As COVID-19 continued its grim progress in the second half of 2021, a September 1 2021 Imgur text post simply titled “Perspective” claimed that more people died in Florida “in the past two weeks” than in the totality of the war in Afghanistan: 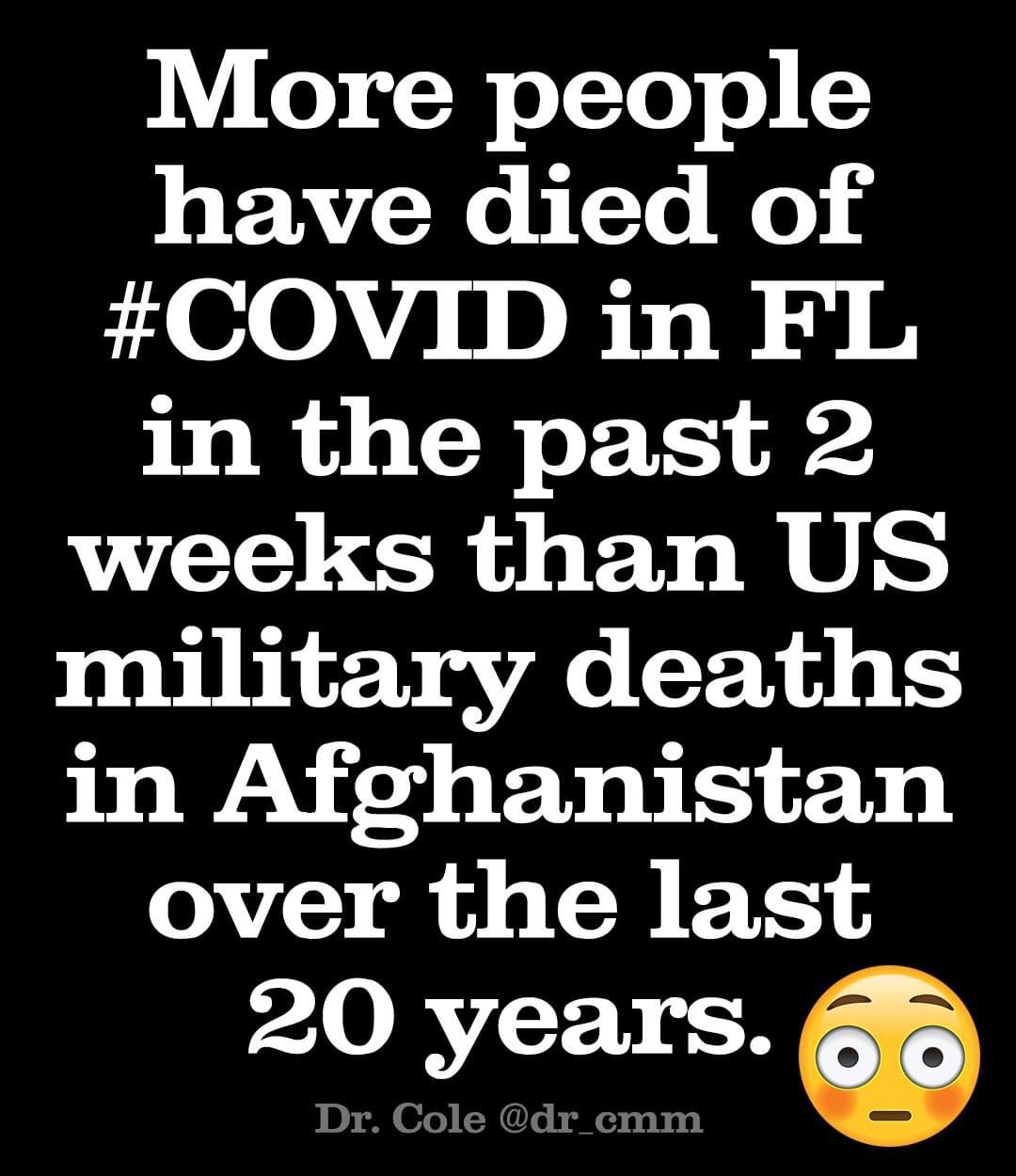 Text at the bottom credited a “Dr. Cole, @dr_cmm,” but search yielded an identically phrased tweet from columnist David Rothkopf on August 29 2021:

More people have died of COVID in Florida in the past two weeks than U.S. military deaths in Afghanistan in 20 years.

The date on Rothkopf’s tweet provided parameters for “the past two weeks,” a range between August 15 and August 29 2021. Neither the Imgur post nor tweet included citations for its claim that deaths over a two-week period in Florida in August 2021 numbered higher than all deaths of American military personnel in Afghanistan over a period of twenty years.

Afghanistan was in the news in August 2021 due to a number of events related to the withdrawal of American troops that month. The Associated Press published an article headlined, “Costs of the Afghanistan war, in lives and dollars” on August 17 2021, and provided a number on American military deaths there: 2,448 as of April 2021.

As such, the tweet’s base claim was that deaths in Florida in the two-week period ending August 29 2021 were in excess of 2,448.

Casualties of war are not always a straightforward calculation, as we have indicated on previous, similar pages:

Deaths are often a lagging indicator [PDF] in COVID-19 mortality rates; case counts are often slow to update in real-time, and the onset of severe illness is during an airborne pandemic can be very unpredictable:

For people who die of COVID-19 infection, the time from onset of illness to death is often several weeks.

Further complicating the comparison were indications that Florida’s statistics might not be reliable. On August 31 2021, Miami Herald published at least two articles about a surge in deaths in the state at that time.

One, which was headlined, “Florida changed its COVID-19 data, creating an ‘artificial decline’ in recent deaths,” reported:

As the delta variant spreads through Florida, data published by the Centers for Disease Control and Prevention suggest this could be the most serious and deadly surge in COVID-19 infections since the beginning of the pandemic.

As cases ballooned in August [2021], however, the Florida Department of Health changed the way it reported death data to the CDC, giving the appearance of a pandemic in decline, an analysis of Florida data by the Miami Herald and el Nuevo Herald found.

On Monday [August 30 2021], Florida death data would have shown an average of 262 daily deaths reported to the CDC over the previous week had the health department used its former reporting system, the Herald analysis showed. Instead, the Monday update from Florida showed just 46 “new deaths” per day over the previous seven days.

In that excerpt, a discrepancy of 216 deaths appeared — the difference between 262 and 46. A separate article by the same newspaper on the same date (“Florida COVID update: 902 deaths added, most from past month, as hospitalizations rise,”) explained:

The jump in the number of reported cases and deaths is due to the newest way deaths and cases are counted and the agency not reporting numbers on Sundays. The numbers include totals from the two weekend days.

The CDC implemented the change earlier this month, causing occasional one-day aberrations like the 901 additional deaths on [a] Thursday and 726 more deaths reported on Aug. 23 [2021].

From the Herald‘s calculations, we were able to derive an average daily count: 262, as of August 31 2021. The New York Times‘ interactive dashboard of COVID-19 cases, deaths, and hospitalizations provided a very slightly different figure at 263 per day:

Data in the image above was captured on September 1 2021, but it is regularly updated. Both newspapers’ estimates differed only narrowly, with the Times‘ estimate higher than the Herald‘s by one.

Using the lower of the two averages (262), we extrapolated it over a fourteen-day period to contrast with the AP’s estimate of 2,448. The figure at which we arrived for 262 for two weeks was 3,668; by that calculation, 1,220 more deaths occurred in Florida in the two-week period than all deaths of American military personnel in Afghanistan during Operation Enduring Freedom.

A tweet and Imgur post claimed “More people have died of COVID in Florida in the past two weeks than U.S. military deaths in Afghanistan in 20 years,” presumably as of August 29 2021, the date on which it was tweeted. The Miami Herald subsequently published an article highlighting the official underreporting of deaths in Florida, but estimates from the Herald and Times indicated that the claim was accurate by a very wide margin of 1,220 deaths.