The Botswanan Doctors Union encouraged residents there to use ivermectin to treat COVID-19.

As the global COVID-19 pandemic continued to rage amid a toxic stew of online disinformation campaigns and official grandstanding, anti-vaccination conspiracy theorists circulated a purported press release from a group in Botswana in early September 2021 they claimed validated their push to promote a treatment that has been rotundly debunked by medical professionals.

Posts about the Botswanan Doctors Union began moving on social media platforms in early September 2021, apparently based on screengrabs of an alleged statement from the Botswana Doctors Union supporting the use of ivermectin against the virus: 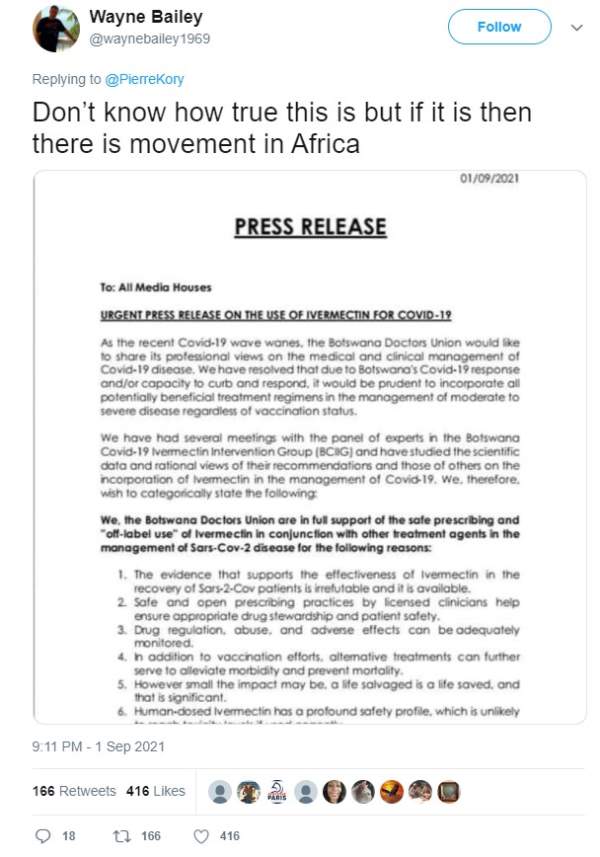 According to the statement, the group — which does seem to exist, but which does not appear to have a working independent website nor much of a social media presence — declared its “full support of the safe prescribing and ‘off-lable [sic] use’ of Ivermectin in conjunction with other treatments” for use against COVID-19.

We sent a message to an email listed on the document asking for both more information on this group and evidence to support its claims, but we have not yet heard back.

But the group itself may not be affiliated with any government agency; the Botswana Medicines Regulatory Authority (BoMRA), which is operated by the Botswanan government’s Ministry of Health and Wellness, has already discouraged the use of ivermectin as a COVID-19 treatment, noting in a January 2021 statement that “there has not been any research presented to the National Regulatory Authorities to demonstrate the effectiveness of the product for the condition.”

The image gained more attention when it was shared by Dr. Pierre Kory, an American physician who has promoted ivermectin in testimony to the U.S. Senate in December 2020, despite a lack of evidence supporting his own statements.

As the Washington Post reported, right-wing media outlets and politicians have fueled a surge in actual medical emergencies connected to off-label use of the anti-parasite drug:

Calls about ivermectin exposure to poison control centers around the country jumped to five times normal levels in July, according to data from the American Association of Poison Control Centers. About a third of nearly 1,200 calls so far this year involved people referred for medical treatment, and about 8 percent were ultimately admitted to a hospital, said Alvin Bronstein, who leads the association’s national data system. The share of people admitted to the critical care unit more than quadrupled compared with the same period last year.

A CDC alert to clinicians last week said that one person who drank cattle ivermectin to prevent coronavirus infection was hospitalized for nine days, with symptoms including hallucinations and tremors. Another person who misused ivermectin this year died, according to Bronstein, who said he does not have information on what form of the drug the person took and cannot say why.

In August 2021, the Food and Drug administration bluntly discouraged Twitter users against taking the drug, saying, “You are not a cow. Seriously, y’all. Stop it”:

In a follow-up statement, the agency reiterated that ivermectin has not been approved for use against COVID-19 and explained how it can have different implications for humans:

For one thing, animal drugs are often highly concentrated because they are used for large animals like horses and cows, which can weigh a lot more than we do—a ton or more. Such high doses can be highly toxic in humans.

But despite several trials showing that ivermectin does not have a positive effect on the disease, prescriptions continued to rise in 2021.

“Everyone wants some cure for Covid because it’s such a devastating illness,” Dr. Shawn Varney of the South Texas Poison Center told the New York Times. “I plead with people to stop using ivermectin and get the vaccine because it’s the best protection we have at this point. Everything else is risk after risk.”