Rep. Ilhan Omar (D-Minnesota) was photographed at a training camp for al Qaeda.

A Twitter user was seemingly intent on spreading disinformation about Democratic Party Rep. Ilhan Omar on Twitter, even after the “proof” they presented was quickly debunked.

In late August 2019, the account posted a photograph of a woman handling a firearm alongside a description, ending with an exhortation to “please retweet” the image:

Here is your precious Muslim congresswoman at a Al’ Qaida training camp in Somalia. She is trying to get this picture blocked and me banned for posting it. Facebook has banned me twice because pic is considered offensive ? 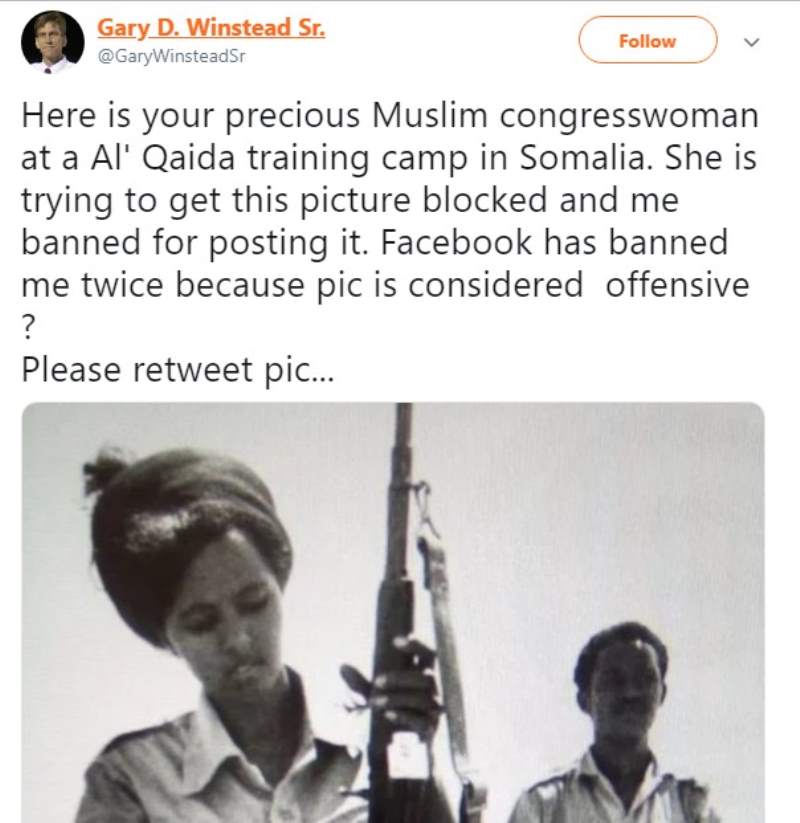 This is a photo of soldier with the then-US-backed Somali army from 1978. Ilhan Omar was born 1982. AQ didn’t exist till the 1990s, she’s repeatedly condemned AQ, & she is a female politician in a democracy – two things AQ hates.

The photograph, in fact, was taken by the Associated Press. The news service’s website provided more background on the unidentified woman:

A woman recruit of the Somali Army checks her automatic weapon at a military training campus at Halane, Mogadishu, on Feb. 25, 1978. On the right is her instructor. President Siad Barre said at a news conference that regular Somali military units have not yet been dispatched in the Ogaden region to avoid international complications.

We contacted AP seeking comment on Winstead’s apparently unlicensed use of their material for spreading disinformation, but they have not yet responded. We also alerted Twitter regarding not only Winstead’s tweet, but his account’s heavy use of anti-Omar content, including one photograph smearing her as a “Muslim terrorist.”