In 2013's The Purge, a surveillance feed of near-future societal breakdown in Celina, Ohio and Warren, Rhode Island was dated March 21 and 22 2020.

One in five Americans were on official coronavirus lockdown on March 21 2020, and many of those Americans watched movies to pass the time —  leading to a rumor that those viewing 2013’s The Purge spotted surveillance feed video in the film dated March 21 and 22 2020:

While watching the purge (2013) in quarantine i see that the day of the purge is today the 21 of March 2020 pic.twitter.com/QhDBkDJU9k

In the above tweet, @moviedetail said they were “watching The Purge (2013) in quarantine,” and spotted that “the day of the purge is today,” on March 21 2020, along with photograph of a screen marked with red circles around the points of interest — the film’s title and the surveillance footage date and timestamps.

Another tweet was nearly identical to that one; @moviedetail evidently swiped their screenshot:

so california going on lockdown 3/21/2020… well what if i showed you THIS. pic.twitter.com/Z28VZzjrLO

Versions of the same claim also spread in meme form: 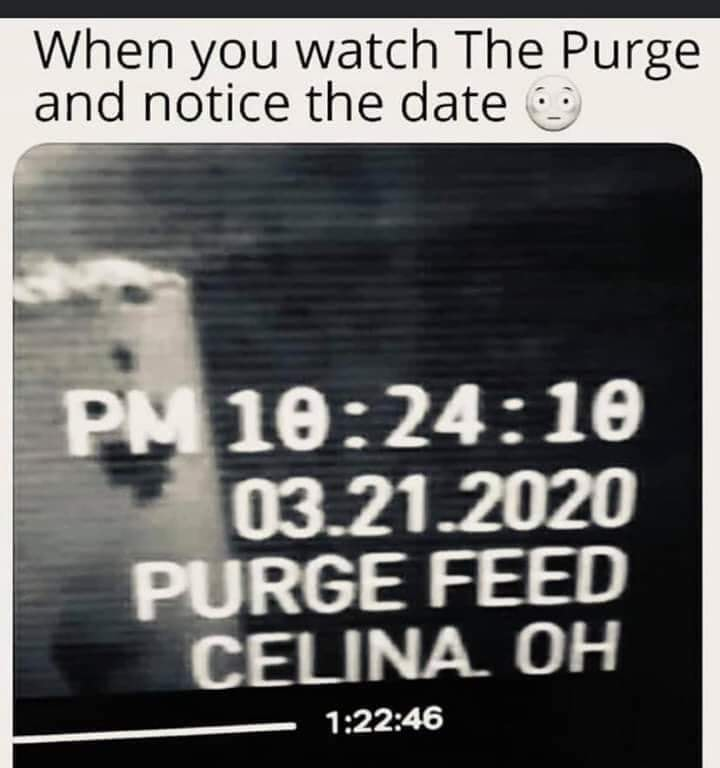 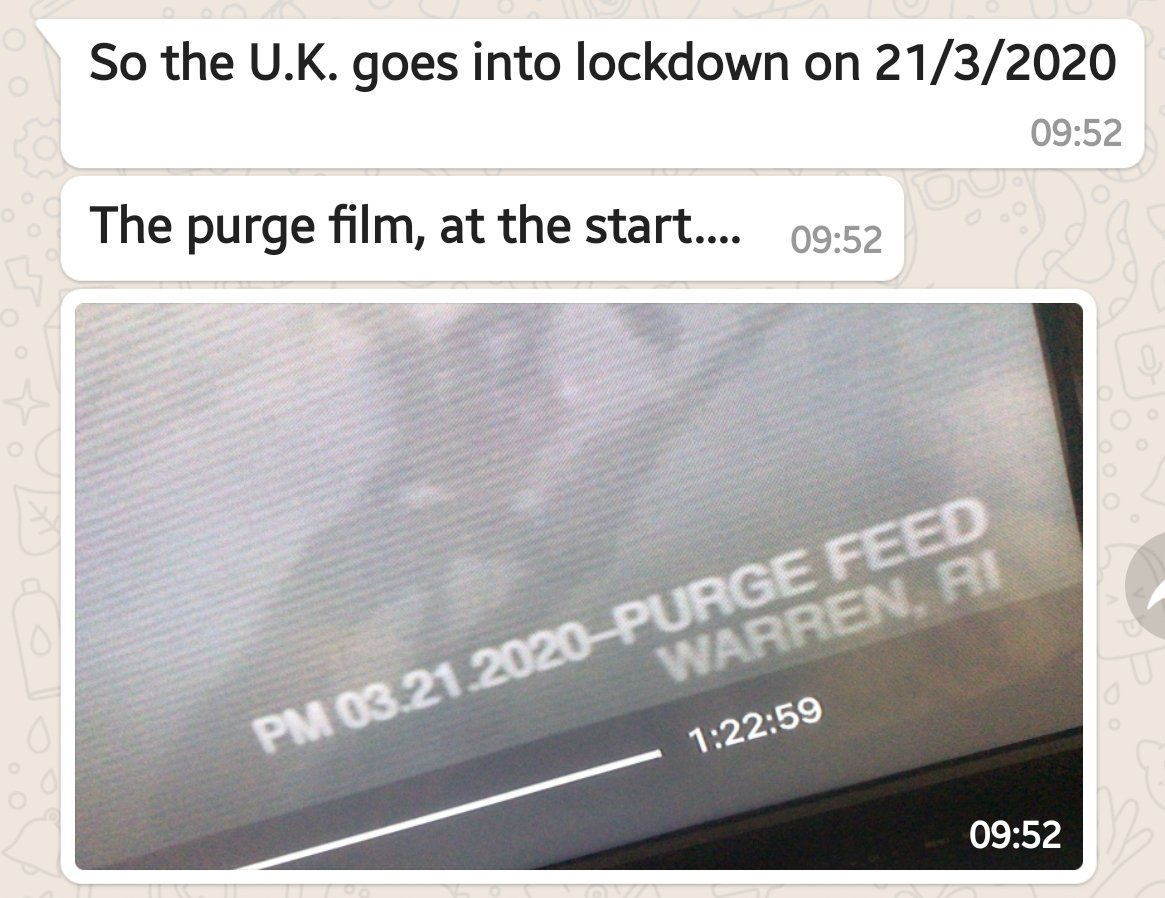 Although the first image appeared to be a cropped version of the Twitter screenshot, the second had a slight variation on the “Purge feed” date and timestamps. Beneath a message stating the UK “goes into lockdown” on March 21 2020, the screencap read:

Is it purge day ? pic.twitter.com/kR9yyWOXBZ

Underneath “The Purge Rules,” text read:

Since the success of the first purge, the US Constitution was ratified to make way for The Purge, an annual 12-hour event from March 21 at 7:00 PM to March 22 at 7:00 AM where all crime, including murder, becomes legal throughout the United States.

Text of “purge rules” circulated separately, using the March 21 and 22 dates without a specific year:

A July 2016 Vox.com explainer addressed the premise of The Purge and the franchise of media following the original 2013 film:

The Purge is a movie franchise named after its own dystopian premise: Each year, America has a 12-hour Purge (from 7 pm to 7 am on the designated Purge day) where anyone can commit any crime they want (murder, rape, burglary, cow tipping, etc.) and not face any kind of criminal charges. The catch is simple: You’re always in danger of being killed. The event has become an annual tradition because people realized that since the introduction of the Purge, the country’s socioeconomic ills — crime, unemployment, a weak economy — have disappeared.

Wikipedia’s The Purge meta-page provided dates in the franchise’s films and media:

In 2014, following an economic collapse and rising social unrest, a political organization named “The New Founding Fathers of America” (NFFA) is formed and is voted into office. The organization establishes a new totalitarian government and a police state. In 2016, the NFFA devises a plan to help stabilize American society and later in 2017, the 28th Amendment to the U.S Constitution is ratified. This amendment establishes a 12-hour event known as “The Purge” which would take place from 7:00 in the evening of March 21, 2017 to 7:00 in the morning of March 22, 2017 wherein all crime including murder becomes legal. Before the Purge begins, the Emergency Broadcast System is activated with rules and a prayer saying “Blessed be our New Founding Fathers and America, a nation reborn” before ending with “May God be with you all”.

That clip began with a “purge feed” from 2017 (first in Jacksonville, Florida, and then in Syracuse, New York), showing a “purge feed” for each successive year through 2021.

A purge feed from Celina, Ohio was also seen (although text was cut off in that iteration), before the footage skipped to 2021 in Cheyenne, Wyoming. Celina, Ohio footage was also seen in a trailer for The Purge published to YouTube in April 2013, without a visible year. Warren, Rhode Island was not in either clip, but another site indicated it might be in the film itself.

A The Purge trailer analysis blogged in January 2014 mentioned Celina, Ohio and Warren, Rhode Island as it described the clips. A year for the Celina, Ohio footage was described (2015), as well as Warren, RI (2016):

After all the change and disruption the next scene that appear is of cctv camera clips where you can see individuals being beaten and murder[ed] by others.

Looking at the different clips it showed that with the dates and information shown at the bottom that whatever was taking place was clearly an annual thing as the dates went up a year. After viewing the cctv another black background appears with the same white styled text with the message “All crime is legal” which also jumps all over the screen like the following message. Another cctv footage appears;

Again we then view another set of cctv footage of a guy being beaten to death, followed by crane view of fires over roads and gangs in hoodies and then a huge house fire with a camera view from the front;

Having a variety of different footages from different times and different states of America also informs the audience it happens all over the country between the 21st March at 7pm and 22nd March 7am (12 hours).

Although the “purge feed” on March 21 2020 in Celina, Ohio was seen in the 2013 film, there was an important element of context was left out of the viral posts — and anyone watching the film would have noticed the context. In 2013’s The Purge, the film opens with several years of footage leading up to the year 2022. The purges in the film franchise started in 2017, and footage from 2017 through 2021 (setting it up for 2022’s purge) bookended the three March 21 and 22 2020 “Purge feed” clips. On social media, the clips were shared to suggest that the film had “predicted” the date more accurately than it actually did.

It is true that The Purge‘s titular purges occurred on March 21 and 22 2020, but that was just one of five years shown in the film. Celina, Ohio’s “purge feed” can be seen above in a longer montage, where various cities and various years are shown to provide background for the fictional film. A 2014 trailer analysis indicated the respective March 21 and 22 years for Celina, Ohio and Warren, Rhode Island were 2015 and 2016 respectively — not 2020.