A January 31 1918 Washington Herald item addressed a subscriber's question about whether it was permissible to take coal from a train car, stating: "We assured her that she would be breaking the law if she took the coal -- but offered to hold the bucket while she shoveled it."

In October 2021, amid discussions of austerity and compassionate policy, a purported January 31 1918 Washington Herald excerpt showing a subscriber’s question about taking coal under difficult circumstances circulated on social media:

The screenshot was shared to r/tumblr on October 14 2021, later spreading to Facebook. The newspaper excerpt said:

A phone call from a subscriber: “There is no heat in my house and my babies are crying with the cold. There is a carload of coal on a railroad track near my home. Would it be wrong if I took some of it?”

We assured her that she would be breaking the law if she took the coal — but offered to hold the bucket while she shoveled it.

Hell i’ll shovel it for her from tumblr

Intermittent spread of the image indicated that something about the purported century-plus-old newspaper clipping was striking chords with readers on social media. One commenter on the October 2021 Reddit iteration opined:

The gilded age was definitely a time with more class consciousness and solidarity, tho. The middle class was smaller and media propaganda less advanced.

Reverse image search returned another iteration of the image (also from Tumblr in 2018), involving a purported comment advising the woman “go to Walmart” to “buy a heater”:

As for the purported Washington Herald excerpt, it was authentic and accurately dated. We were able to find it in a Library of Congress archive, on page four of that date’s edition. The context of the collection of snippets of which it was a part wasn’t easy to discern: 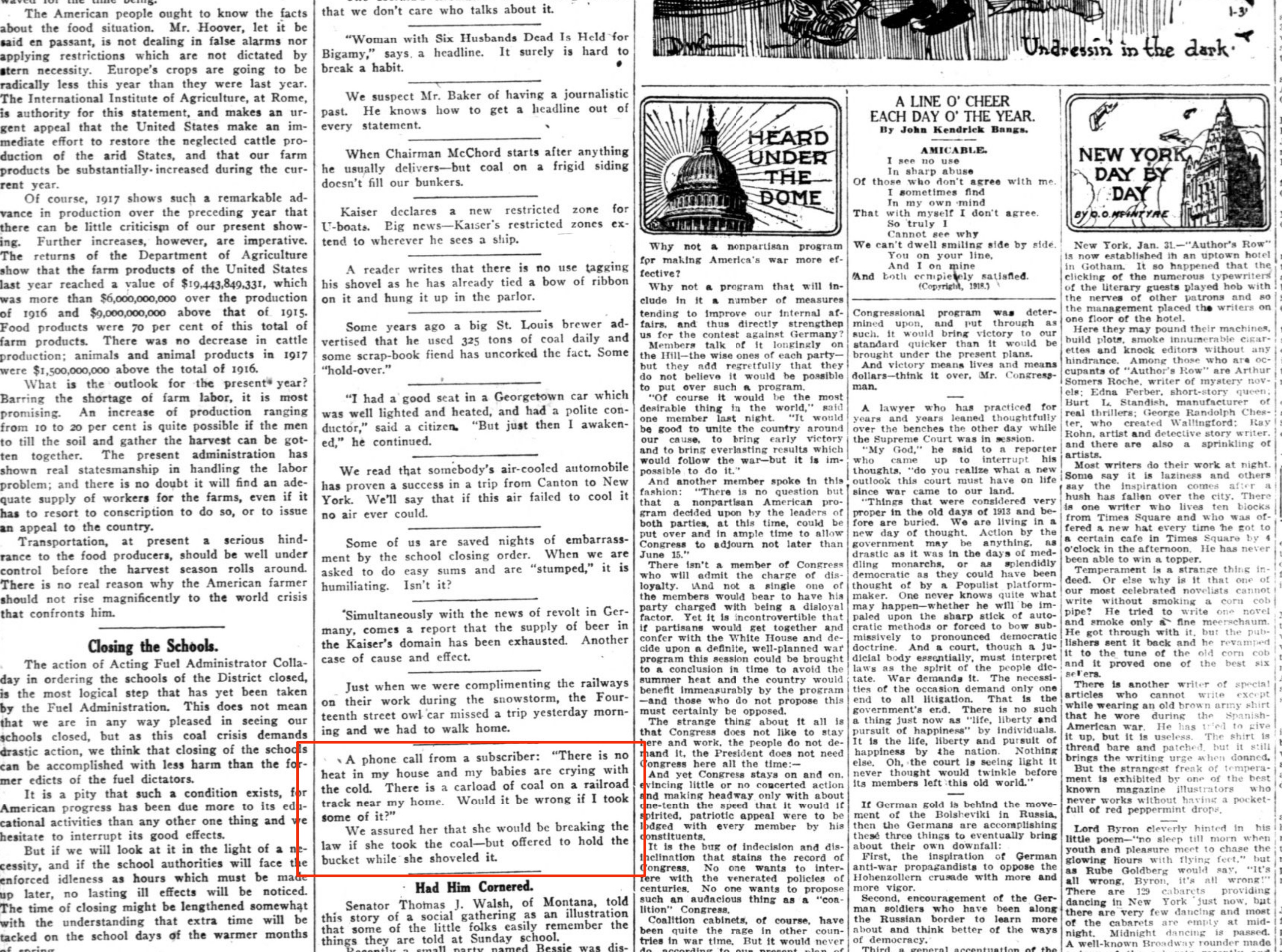 Since January 2018, a purported January 31 1918 Washington Herald excerpt has regularly gone around social media platforms. It shows a brief commentary about whether it was “wrong” to take coal from a railcar if a subscriber lacked heat, continuing: “We assured her that she would be breaking the law if she took the coal — but offered to hold the bucket while she shoveled it.” The excerpt was real and accurately described, appearing in Library of Congress archives from the Washington Herald on January 31 1918.