On November 16 2020, increasingly desperate claims that Donald Trump had actually defeated Joe Biden in the presidential election despite the reality of his decisive defeat continued to circulate; one such rumor included the assertion that Trump won 410 electoral votes and Joe Biden 128, based on a segment from disinformation network OANN about a Dominion voting server purportedly “seized” in Germany:

Although the post above referenced a “Trump landslide: 410-128,” the map in the video’s thumbnail displayed a different total, 227 electoral votes for Biden to Trump’s 232 — with 79 “undecided.” OANN appeared to credit Trump with all 232 votes he won per official sources, while simultaneously under-reporting the balance of votes projected for Joe Biden in the widely-reported final election results: 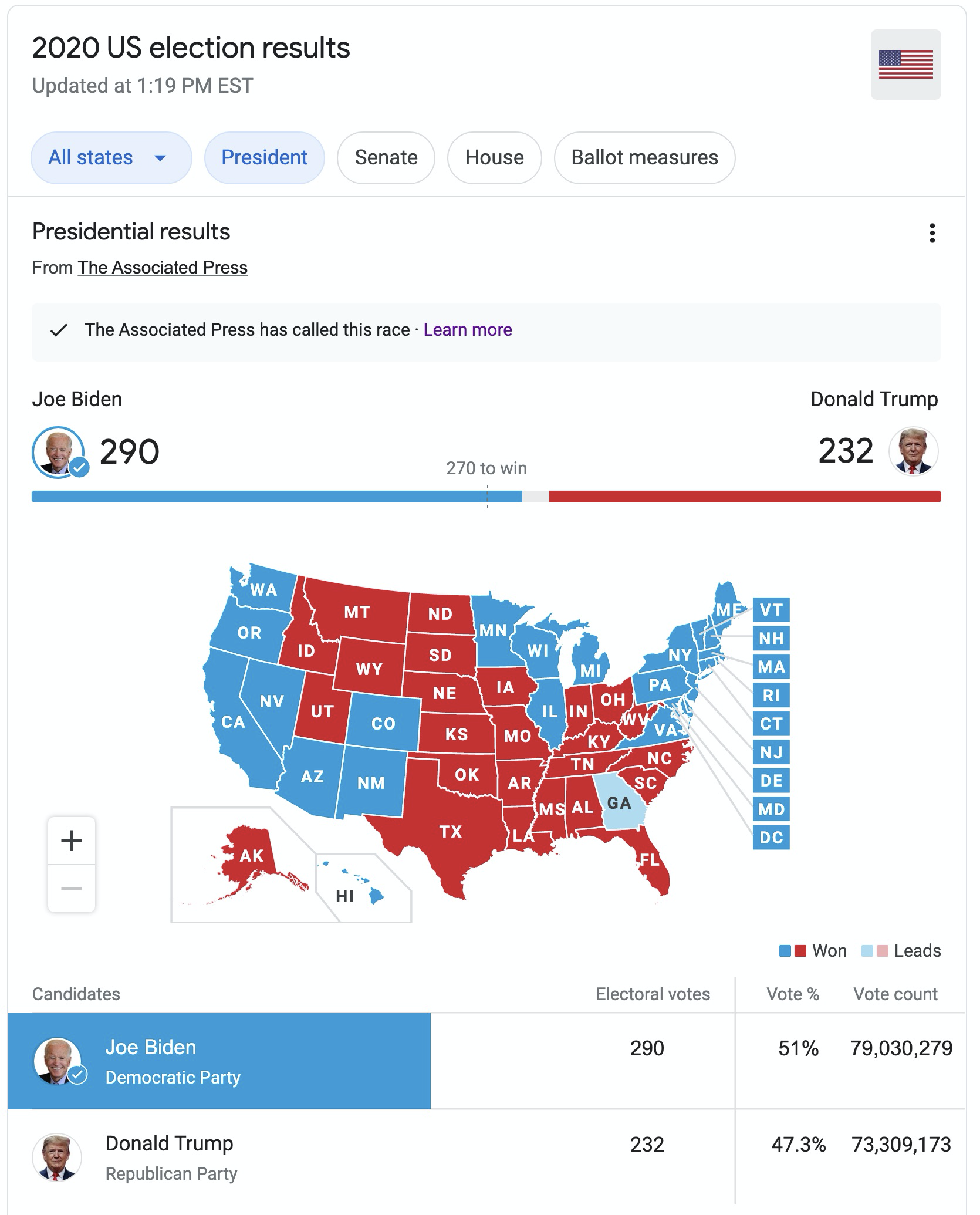 OANN’s refusal to include the tweet itself may have been due to its sourcing, and their need to introduce of plausible deniability. We finally found a November 14 2020 tweet making the same claims by Virginia congressional candidate Manga Anantatmula:

The raw data in the server seized by the US military shows Trump won by a landslide 👇🏻👇🏻👇🏻 410!!!!https://t.co/Y7qP2PeIpf @realDonaldTrump @RudyGiuliani @DelRichAnderson @VA_GOP, VOID all results in landslide states and declare the R-candidates winners!! pic.twitter.com/5UpvHZDiEE

Anantatmula sourced their claims from the Indian website GreatGameIndia.com’s November 14 2020 post, “INTEL: US Military Raided Scytl Servers In Germany For Evidence After Vote Switching Scandal.” That post, like OANN, leaned on Gohmert’s uncited claims about either Scytl or Dominion servers seized in Germany, or perhaps Spain:

According to intelligence sources US Military raided voting machine company Scytl servers in Germany for evidence of manipulation in 2020 US Elections after it was exposed in vote switching scandal by GreatGameIndia. Scytl has a long history of election fraud in various nations including injecting backdoors in its election software. The issue has prompted experts to question why the sensitive job of counting votes was outsourced to a foreign company? How could a bankrupted Spanish company Scytl count American votes in Spain?

According to Congressman Louie Gohmert, Texas there is “compelling evidence” of vote switching in the 2020 presidential election compiled by the Spanish electronic voting machine company Scytl.

The Texas lawmaker said in an interview with Newsmax TV that US military forces seized the company’s server in Frankfurt, Germany. Gohmert said there are some who believe it’s U.S. intelligence “that manipulated all this” to cover themselves.

In a Facebook conference call, Gohmert elaborated that he received the information Sunday from “some of our former intel people that there was extremely compelling evidence that could be gleaned from Scytl,” the Barcelona company that was “responsible for aggregating all the information from all the machines.”

If the map Ananatmula shared was part of GreatGameIndia.com’s post, it was removed; the only reference to 410 electoral votes for Trump was in an extensive comments section. The map was generated on 270towin.com, a site on which anyone can generate any Electoral College result. Incidentally, GreatGameIndia.com was assessed by NewsGuard [PDF], which found that the site frequently spreads false and unvetted claims.

It seems likely that Anantatumula created the map to illustrate a Trump landslide; we took that a step further, and created a different “Trump landslide” map in roughly 90 seconds: 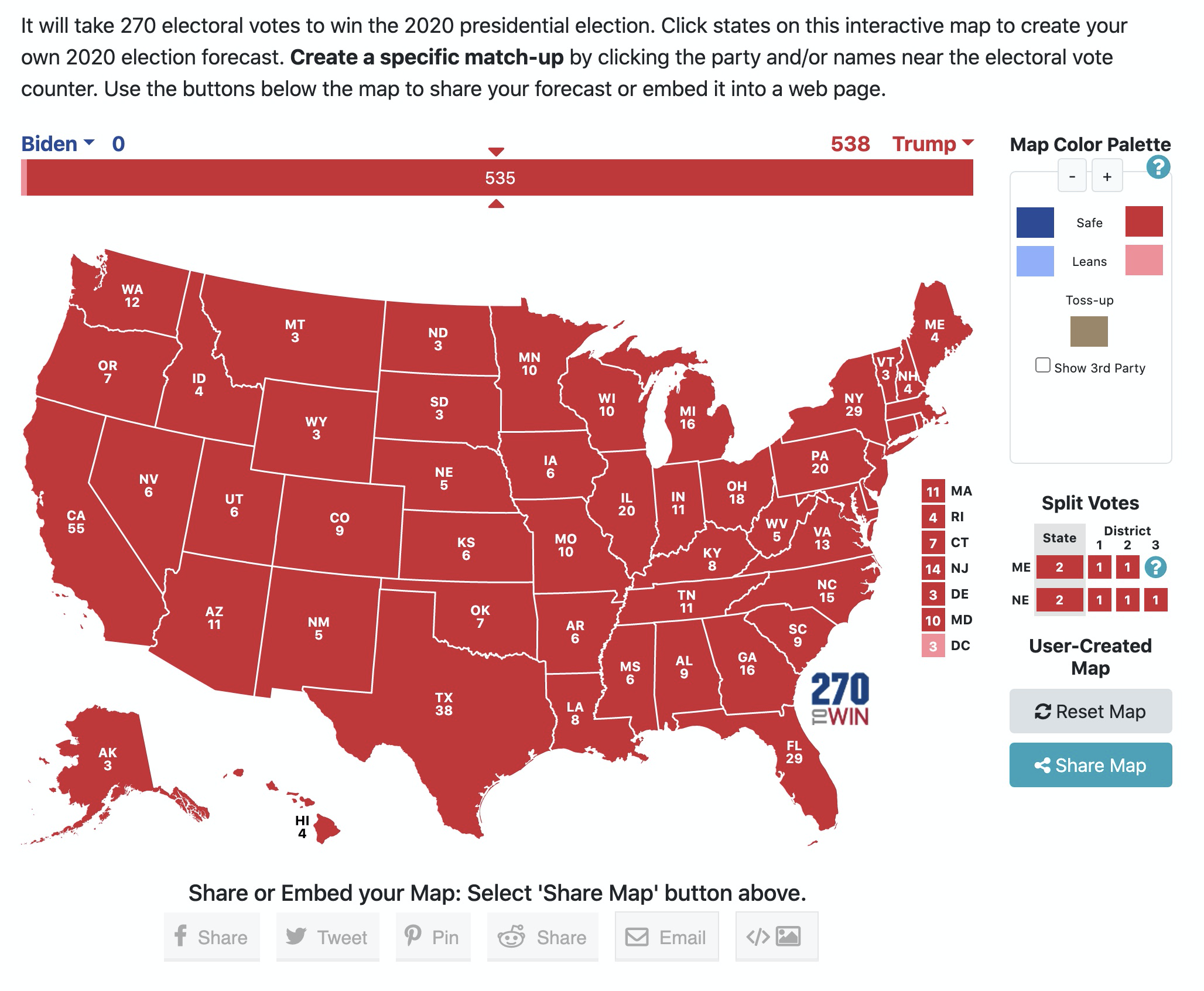 Any user-generated map from 270towin.com was not a predictor of any sort of data or official result. On November 17 2020, the map displayed by default was closer (but not identical) to the final result: 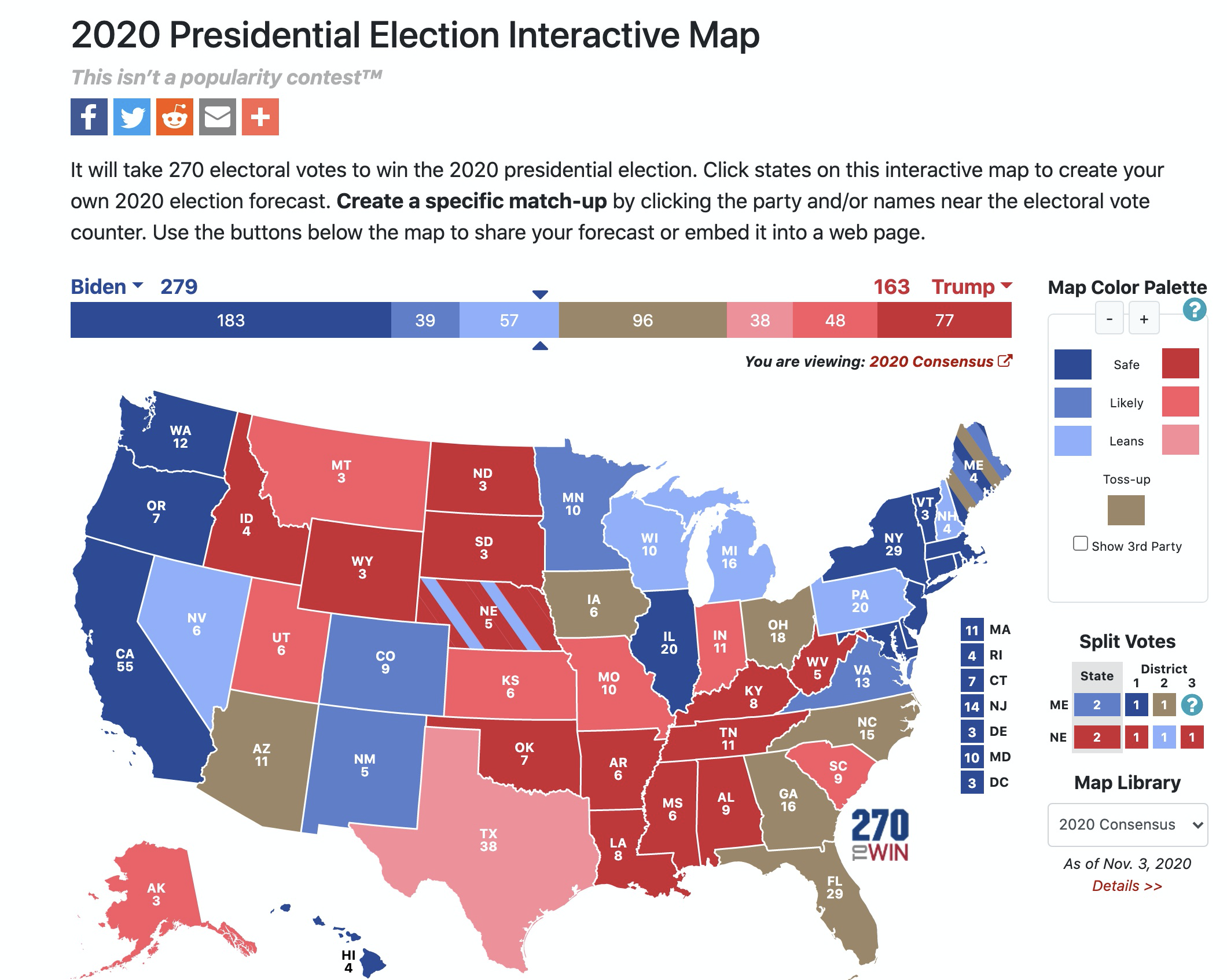 Moreover, the Associated Press obtained comment from both Scytl and the United States Army for a November 15 2020 fact-check, which began:

CLAIM: The U.S. Army raided the Frankfurt office of the Spanish election software company Scytl to seize servers that had evidence of voting irregularities in the Nov. 3 U.S. election.

AP’S ASSESSMENT: False. Both the Army and Scytl told The Associated Press the claim is not true. Furthermore, Scytl does not have offices or servers in Frankfurt, Germany.

THE FACTS: Social media users Saturday were sharing reports published by conservative websites claiming servers that would reveal wrongdoing in the U.S. election had been confiscated by U.S. military forces in Germany. Most posts said the servers belong to the software company Scytl, which is based in Barcelona, and some suggested the servers housed information from Dominion Voting Systems.

Gohmert was also quoted in a much more comprehensive fashion by the AP than by OANN:

In his remarks, which were widely shared on social media, Gohmert acknowledged that the information about the alleged raid only came from a “German tweet in German,” and he said, “I don’t know the truth.”

To recap, OANN spread the claim Trump won 410 electoral votes to Biden’s 128, obscuring the source for that claim. The sources were, apparently, Anantatumula, Gohmert, and a customizable electoral map. Anantatumula appeared to create a map to visually support these claims, but that map was generated on 270towin.com, not a server found in Germany or Spain. Sctyl and the Army addressed the claims, confirming that are completely false. As of November 17 2020, Trump had received 232 electoral votes to Joe Biden’s 290, making Trump’s electoral defeat as decisive as his popular vote loss.