Circulating posts show a real 1921 poem titled, "When You Meet A Member of the Ku Klux Klan," by Robert L. Poston.

On December 13 2021, a poem titled “When You Meet a Member of the Ku Klux Klan” spread virally on Facebook and Twitter: 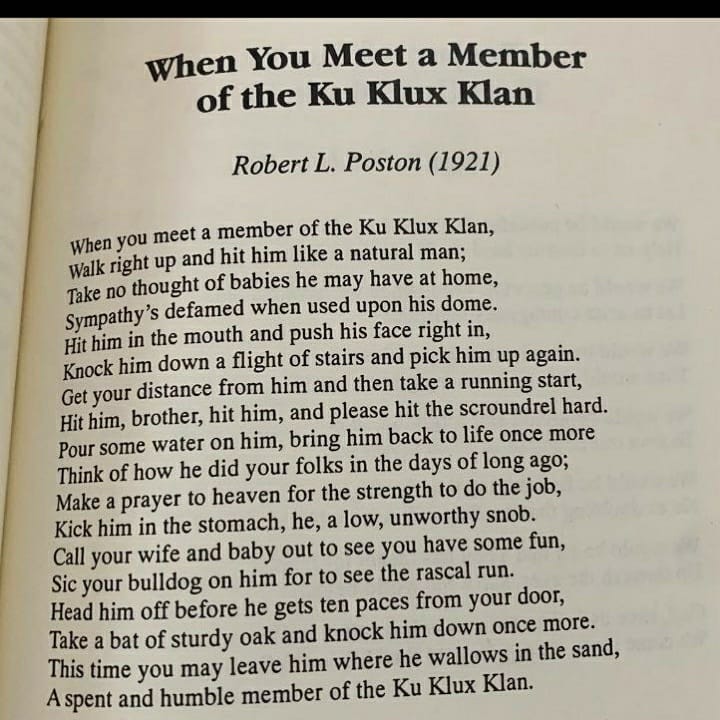 The poem read as follows:

When You Meet A Member Of The Ku Klux Klan

When you meet a member of the Ku Klux Klan,
Walk right up and hit him like a natural man;
Take no thought of babies he may have at home,
Sympathy’s defamed when used upon his dome.

Hit him in the mouth and push his face right in,
Knock him down a flight of steps and pick him up again.

Get your distance from him and then take a running start,
Hit him, brother, hit him, and please hit the scoundrel hard.

Pour some water on him, bring him back to life once more
Think of how he did your folks in the days of long ago;
Make a prayer to heaven for the strength to do the job,
Kick him in the stomach, he, a low, unworthy snob.

Call your wife and baby out to see you have some fun,
Sic your bulldog on him for to see the rascal run.

Head him off before he gets ten paces from your door,
Take a bat of sturdy oak and knock him down once more.

This time you may leave him where he wallows in the sand,
A spent and humble member of the Ku Klux Klan.

Neither of the posts included the name of the book it appeared in or additional information about the poem or poet. A search for “When You Meet a Member of the Ku Klux Klan” (in quotes) returned only 16 results, indicating that the poem was perhaps not widely reproduced as of December 2021.

Poston married the sculptor Augusta Savage in 1923. In December of that year, he was the leader of a delegation sent to Liberia by the UNIA. The purpose of the trip was to finalize arrangements for a mass emigration of African Americans to Liberia. He was accompanied on this trip by Henrietta Vinton Davis and Milton Van Lowe, among others. Poston and the others met with President King of Liberia, but they were not ultimately able to obtain the permissions and aid that they required. Poston could not hide his disappointment on the voyage home. While on board the SS President Grant, he contracted a fever and died of lobar pneumonia.

Of the few results, three were literary references from Google Books. “When You Meet a Member of the Ku Klux Klan” appeared on page 73 of the 1983 book Literary Garveyism: Garvey, Black Arts, and the Harlem Renaissance, in larger context about Poston’s life and death at the age of 34. It was referenced in print again in 1994, in the book Imagining Home: Class, Culture and Nationalism in the African Diaspora, and in 1996, it was partially quoted in the biography Joe Gould’s Teeth. None of the three Google Books citations matched the image circulating in December 2021, and the source of that variation was unknown.

A December 2021 image of a poem titled “When You Meet a Member of the Ku Klux Klan” spread virally on Facebook and Twitter. The image accurately described the poem, its author (Poston), and the year in which it was written or first published (1921). Based on what was at the time a small internet footprint, the poem’s circulation appeared to be the first time Poston’s work received widespread notice. It was, however, documented in works dating back to at least 1983.