December 2021 Facebook post depicts a "new mural on the side of the Harriet Tubman museum in Cambridge, MD."

On December 9 2021, a Facebook user shared the following image of a mural depicting Harriet Tubman: 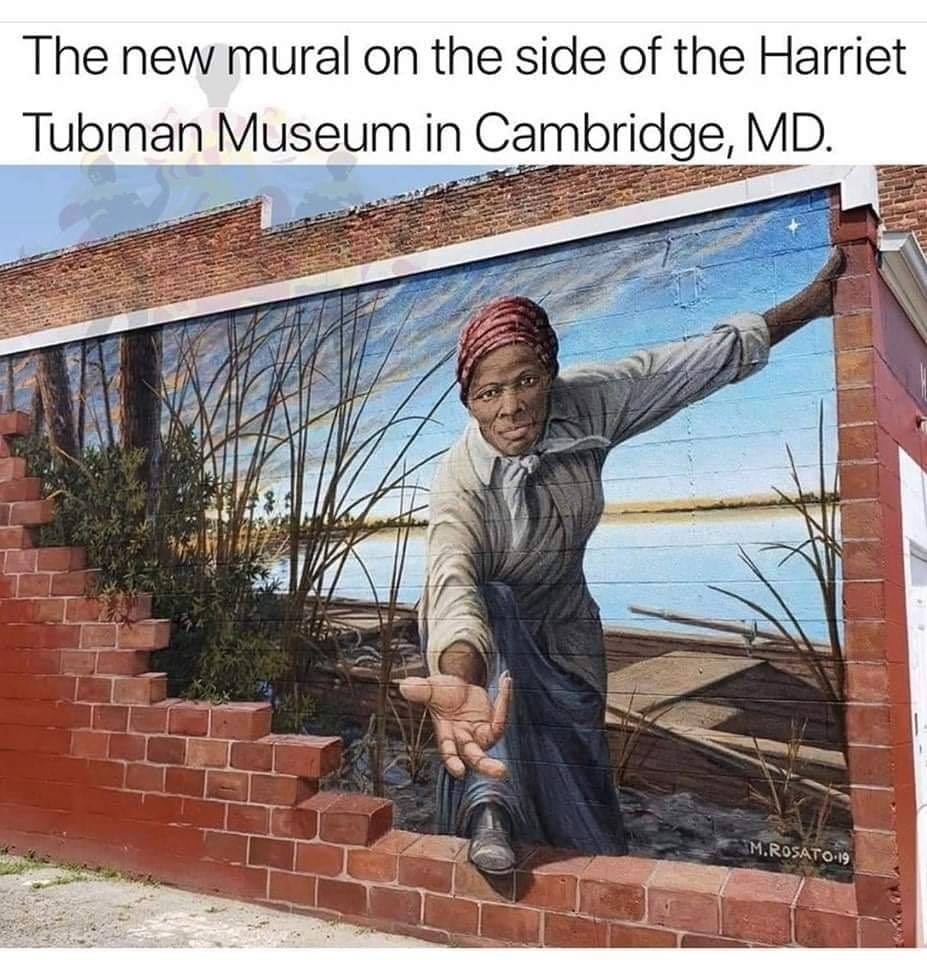 Text at the top of the image read:

The new mural on the side of the Harriet Tubman Museum in Cambridge, MD.

At the bottom, a signature appeared. It read “M. Rosato 19,” suggesting the mural was perhaps painted in 2019.

A quick search indicated that there is a Harriet Tubman Museum in Cambridge, Maryland — and one of the first results describing it featured some of the depicted artwork in its header. A brief description further referenced the mural and its artist:

Underground Railroad ‘conductor’ Harriet Tubman was born in Dorchester County around 1822. At this small museum in downtown Cambridge – just a few miles from where she grew up – learn of the strength, courage, and determination of this remarkable woman.

The Harriet Tubman Museum & Education Center was started in the 1980s – and is still run by – dedicated local volunteers who want to share Harriet Tubman’s story and preserve her legacy. The museum building features a powerful and moving mural of Harriet Tubman that has attracted attention from around the country. The mural was commissioned by the Dorchester Center for the Arts and completed in May 2019 by artist Michael Rosato.

As such, the mural was somewhat accurately described, one of the first featured of the museum mentioned on the page. It was “completed” in May 2019, so it was perhaps not entirely new in December 2021.

In June 2019, CNN reported on a viral photograph in which the Tubman mural was featured. It began with an explanation for the mural, and comment from Rosato on his inspiration and vision:

By now, you’ve probably seen the photo of a 3-year-old girl reaching out to touch the outstretched hand on a nearly completed mural of Harriet Tubman.

The powerful painting was brought to life by artist Michael Rosato. The 59-year-old was asked to paint the mural by the Dorchester Center for the Arts for the 50th Anniversary of the Maryland State Arts Council. It was finished [in May 2019] and can be seen on the side of the Harriet Tubman Museum & Educational Center in Cambridge, Maryland.

“I thought, why don’t I just do that moment,” Rosato told CNN. “That moment when an enslaved person has to trust her to take their hand to freedom.”

Tubman’s hand is also a way of inviting visitors into the museum, which is why the bricks are falling down, he said.

A viral Facebook post purportedly depicting a “new mural on the side of the Harriet Tubman Museum in Cambridge, MD” was largely accurate. The mural was real and resembled the image, and it was painted on the museum in question. Rosato completed the mural in May 2019, two-and-a-half years before the December 2021 post began circulating on Facebook.