The state of Texas is sending parents DNA kits and collecting fingerprints and DNA to identify children in "emergencies," like school shootings.

On October 19 2022, a link about Texas schools sending DNA kits to parents for ease of student identification in an “emergenciwes” was shared to Reddit’s r/nottheonion — a subreddit for “true stories that are so mind-blowingly ridiculous” that they could have originated with satire site The Onion:

On October 20 2022, an Imgur user shared a screenshot of the same headline: 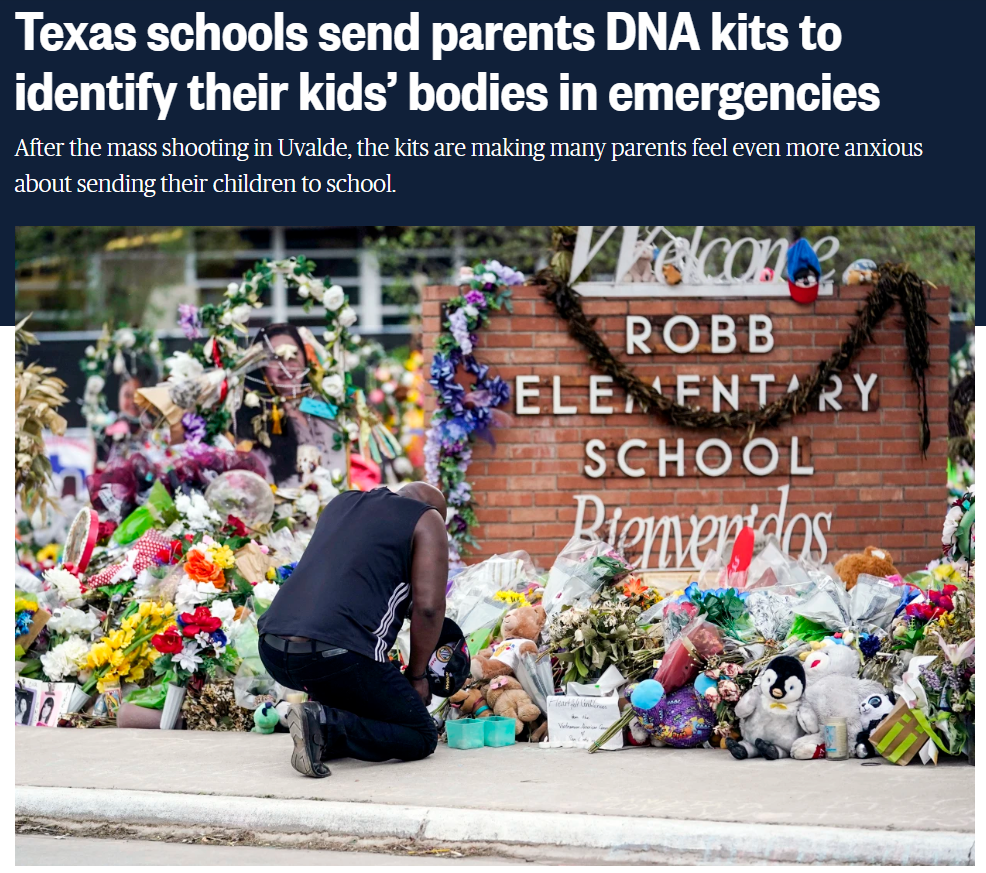 Above a photograph of a man kneeling in front of a large memorial at the site of Robb Elementary School in Uvalde, Texas, a subheading read:

After the mass shooting in Uvalde, the [DNA] kits are making parents even more anxious about sending their children to school.

Commentary from the image’s submitter appeared underneath the screenshot:

Texas once again proves it’s leading the race to see which state can be the most disgusting in the way it handles human life of any kind. Vote. VOTE VOTE VOTE. Jesus christ, I don’t have kids and don’t want kids and don’t even really LIKE kids, but this? No. Just….No. This is Not OK.

Both posts referenced an October 18 2022 NBC News article, with the same headline as the title of the Reddit post. It linked the purported Texas initiative with 2021 state legislation, reporting that the kits were designed to store children’s DNA and fingerprints at home:

The state of Texas is sending public school students home with DNA kits designed to help their parents identify their children “in case of an emergency.”

In 2021, the Texas state legislature passed Senate Bill No. 2158, a law requiring the Texas Education Agency to “provide identification kits to school districts and open-enrollment charter schools for distribution to the parent or legal custodian of certain students.”

The Texas public school system will provide ink-free fingerprint and DNA identification cards to all K-6 students who are eligible. Parents are not mandated to use the kits.

The three-fold pamphlets allow caregivers to store their children’s DNA and fingerprints at home, which could then be turned over to law enforcement agencies in the event of an “emergency.” According to the legislation mandating the kits be provided to qualifying Texas families, the fingerprint and DNA verification kits were intended to “help locate and return a missing or trafficked child.”

Noting that the kits led to unease in the aftermath of the May 2022 mass shooting in Uvalde, Texas, which left nineteen children and two adults dead, the story added:

Many of the children gunned down inside Robb Elementary were not easily identifiable as a result of their catastrophic injuries. Some close family members provided DNA swabs in order to positively identify the children’s remains.

NBC News linked to Texas Senate Bill 2158 [PDF], a concise piece of legislation. With a provision for “rules relating to the destruction of fingerprints and photographs made or kept,” the bill primarily held:

AN ACT
relating to requiring the Texas Education Agency to provide identification kits to school districts and open-enrollment charter schools for distribution to the parent or legal custodian of certain students.

BE IT ENACTED BY THE LEGISLATURE OF THE STATE OF TEXAS:

Sec. 33.0531. CHILD IDENTIFICATION PROGRAM. (a) The agency shall provide to all school districts and open-enrollment charter schools inkless, in-home fingerprint and DNA identification kits to be distributed through the district or school on request to the parent or legal custodian of any kindergarten, elementary, or middle school student.

(b) A parent or legal custodian who receives a fingerprint and DNA identification kit may submit the kit to federal, state, tribal, or local law enforcement to help locate and return a missing or trafficked child.

Clicking a link in “Subchapter C” led to a portion of Texas Education Code about fingerprinting initiatives. The DNA aspect of the code was appended to fingerprint-related provisions enacted in 1995: 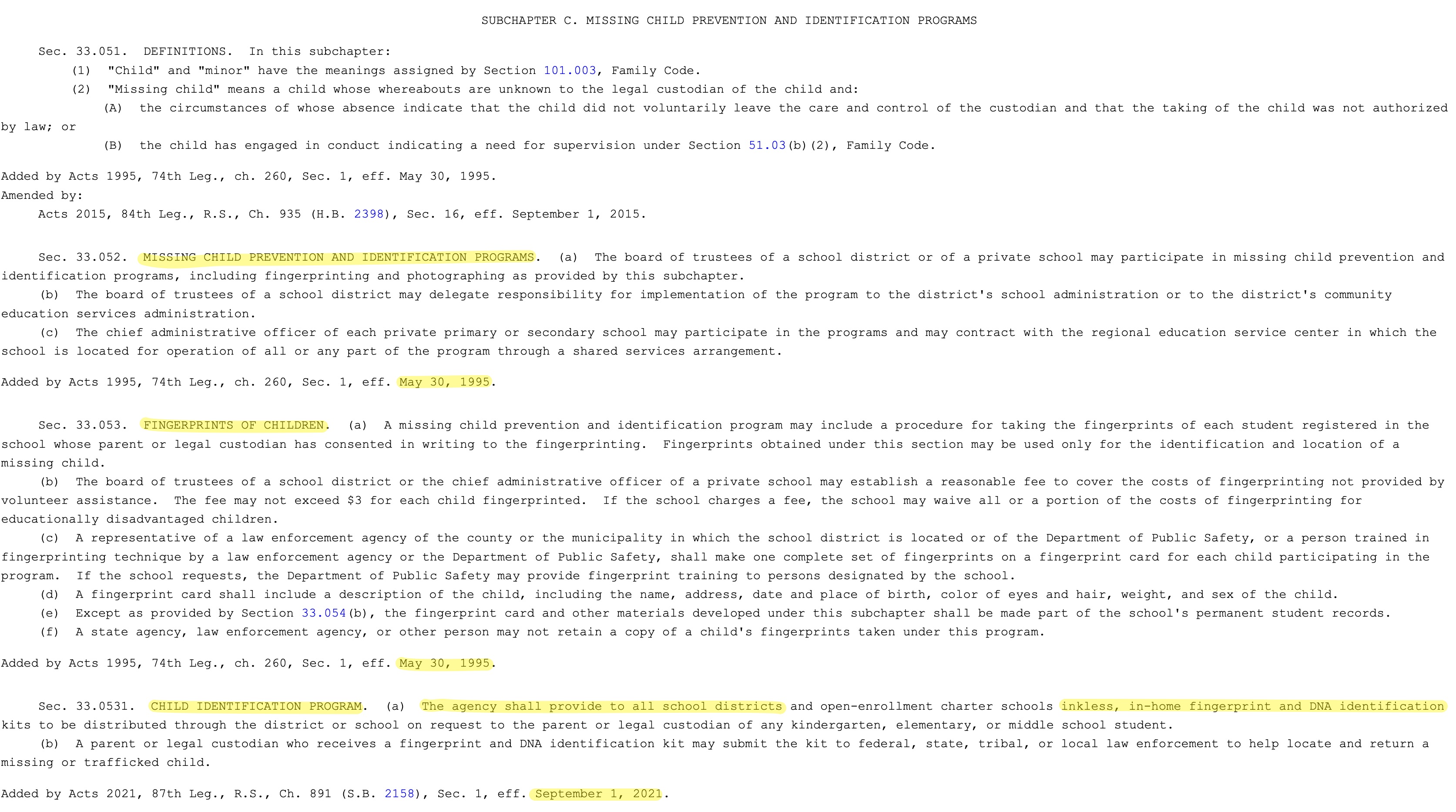 DNA collection was codified in Texas in September 2021, eight months before the shooting in Uvalde, Texas.

Education news site EdWeek.org addressed the “viral” and “national” news story on October 20 2022, explaining how the stated purpose of the initiative clashed with the optics of it (in a piece aptly titled “Texas Schools Are Sending DNA Kits Home to Parents. Why This Is a Communications Mess”):

Schools in Texas are providing parents with free DNA and fingerprint identification kits, as part of a program to help identify missing children.

While the law that created the program does not say that the kits are to help identify children’s bodies after a school shooting, that hasn’t stopped some parents from drawing a link between the two. This story has now spurred national coverage and viral online outrage over a program created with little fanfare over a year ago, including from parents whose children were killed in school shootings.

Policymakers and district leaders need to be attuned to how parents are going to receive this information, said Trump, especially just five months after the second deadliest K-12 school shooting ever in the United States.

Some of the victims killed in the recent school shooting at Robb Elementary, which left 19 children and two teachers dead, had to be identified using DNA testing.

An October 18 2022 Today.com article about the Texas DNA identification kits included a comment encapsulating the perceived link between the kits and the Uvalde school shooting:

Tracy Walder, a former CIA and FBI agent and current college professor who taught high school history for 16 years, said she was “devastated” when she heard her second grade daughter would be sent home with a [fingerprinting and DNA] kit.

“You have to understand, I’m a former law enforcement officer,” Walder, who has lived in Texas for 14 years, told TODAY Parents. “I worry every single day when I send my kid to school. Now we’re giving parents DNA kits so that when their child is killed with the same weapon of war I had when I was in Afghanistan, parents can use them to identify them?”

On October 19 2022, the American Civil Liberties Union (ACLU) tweeted about “mass collection of our children’s DNA,” with a link to a paywalled article. (The tweet did not articulate that the kits were designed to be stored at home, not by the school district):

Asking children for their DNA compromises not just their own genetic privacy but the privacy of their family as well.

Mass collection of our children's DNA is the wrong approach to keeping them safe. https://t.co/tC5sKu7UY4

On the same day, the Dallas Independent School District (ISD) tweeted a link to more information about the fingerprint/DNA kits:

This week, Dallas ISD began distributing inkless fingerprint child identification kits to campuses throughout the district. Read more about how the kits provide parents with a record of their child to help identify them in the case of an emergency ⬇️https://t.co/tVZc7EKE3F

This week [ending October 22 2022], Dallas ISD began distributing inkless fingerprint child identification kits to campuses throughout the district. Schools are providing kits to families with students in kindergarten through eighth grade. As part of the National Child Identification Program, these kits provide parents with a record of their child’s physical characteristics and fingerprints to help identify them in the case of an emergency.

Once received, parents can complete the form with their child’s information and store it in a secure location at home. Each kit includes instructions in English and Spanish; participation is entirely voluntary.

This initiative stems from bill SB 2158 passed in the last legislative session. The bill tasked the Texas Education Agency (TEA) with providing identification kits to all school districts for distribution to students in grades K-8. Dallas ISD received a total of 92,400 kits from TEA.

“They’re inkless fingerprint kits, it looks just like a letter envelope sent home,” Taina Maya, Chief Communications Officer of Killeen ISD, told KWTX. “It has all the instructions laid out for them. And really this is something for parents to keep in case of emergencies. but we hope they never have to use these kits … Parents need to be also understanding that this kit can be valuable for them beyond what they think of at this time as far as school safety,” Maya said. “This is something where… human trafficking, these are dating violence, these are potentially fingerprints and pictures of your students in a safeguarded place. It could be something that might help them further down the road.”

“For general detectives, investigating any crime where DNA is needed, especially when identifying victims, is huge,” Scaramucci said.

“We’ve worked with the state of Texas almost 25 years. It’s been overwhelmingly a success until, because of the timing I believe, you got some people who are questioning it. But the ID kit is for no other reason than to help parents locate a missing or a human trafficked child.”

Another October 19 2022 article, from KXAN, clarified details of the initiative:

Parents are not required to use the kits, nor do they have to return the kits to their school district … the bill’s author said the intent of the legislation has nothing to do with school shootings. State Sen. Donna Campbell, R-New Braunfels, introduced it with the goal of helping parents have information to give authorites in the event that their child is abducted or trafficked.

Eanes ISD Superintendent Dr. Jeff Arnett said, if anything, his district is mainly receiving questions about privacy from parents.

“We don’t recollect them. We’re not compiling any of that data associated with the fingerprinting kits,” he said. “It’s entirely up to the families to decide whether they want to use the kits with their children, keep them for the future perhaps or discard them altogether.”

In October 2022, a high-profile news item reported that Texas was sending parents DNA kits in order to proactively prepare to identify children’s bodies in the event of emergencies; the initiative was largely viewed as a response to the May 2022 Robb Elementary School massacre in Uvalde, Texas. The kits were real, codified prior to the mass shooting (in September 2021). The legislation was an amendment to a 1995 portion of Texas Education Code addressing efforts to find missing or trafficked children.

The Texas DNA kits controversy was inevitably yet erroneously linked to the tragedy in Uvalde, in part because some of the victims were identified via familial DNA. Secondary concerns about privacy emerged, but the DNA kits were designed to be stored at home and only used in the event of an emergency.