Summary of eRumor:
Greek border agents found guns and ammo made by Yavex USA headed to terrorists in shipping containers full of furniture.
The Truth:
Claims that Greek customs officials found guns and Yavex ammunition headed to regions controlled by terrorists are mostly false
This is actually a new twist on old rumor. In September 2015, Greek officials found guns and ammo inside a shipping container that was disguised to look like lawn furniture. Although it was rumored that the arms were headed to Syrian refugee camps in Europe, it was actually bound from Turkey to Libya, Reuters UK reports:

A coast guard patrol boat raided the vessel on Tuesday, 20 nautical miles northeast of Crete. The freighter, with a crew of seven and which had sailed from the Turkish port of Iskenderun, was escorted to Heraklion port on the island.

The United Nations has imposed an embargo on weapons shipments to Libya, which is plagued by factional conflict.

“The ship’s crew is being questioned and the content of its containers will be checked,” a coast guard official said, declining to be named.

The coast guard provided no further details of what kind of arms the freighter had on board, or its ownership.

A Turkish foreign ministry spokesman confirmed the cargo included weapons but said it was fully documented and was destined for the Sudanese police force. The vessel was also carrying building materials for Libya, he said.

In September 2016, the story was re-reported as breaking news. This time, photos showed boxes of “Yavex” brand ammunition, which led internet sleuths to claim that it was being supplied by Yavex USA, an American company based in Florida, to terrorist cells or refugees.
First, we can confirm that boxes of Yavex ammunition were indeed found in the shipping containers in 2015. Photos and videos of the shipping containers, like this one published by the Independent, clearly show boxes of Yavex ammo: 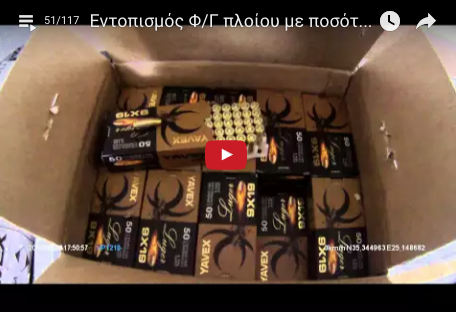 YAVASCALAR AS, based in Balikesir / Turkey and specializes in the manufacture and marketing of civil explosives, initiating systems and hunting munitions. Founded in 1940, Yavascalar ranks today as a leader in the field of explosives in Turkey and in the countries of the region.

And Yavex USA is just a distribution division of Yavascalar AS, according to “Shot Show,” an online resource for gun shows and exhibitors:

Besides that, it’s not clear exactly who sent the shipping containers full of arms, but it’s highly unlikely that it came directly from Yavascalar AS. In reality, anybody could have put the company’s ammunition into the shipping containers. And, even though it’s not clear exactly who was behind the shipment, the Turkish Foreign Ministry confirmed the contents and destination of the containers, indicating that it could have been behind the shipment.