An image and meme accurately describe the life and achievements of a young girl named Zinaida Portnova. 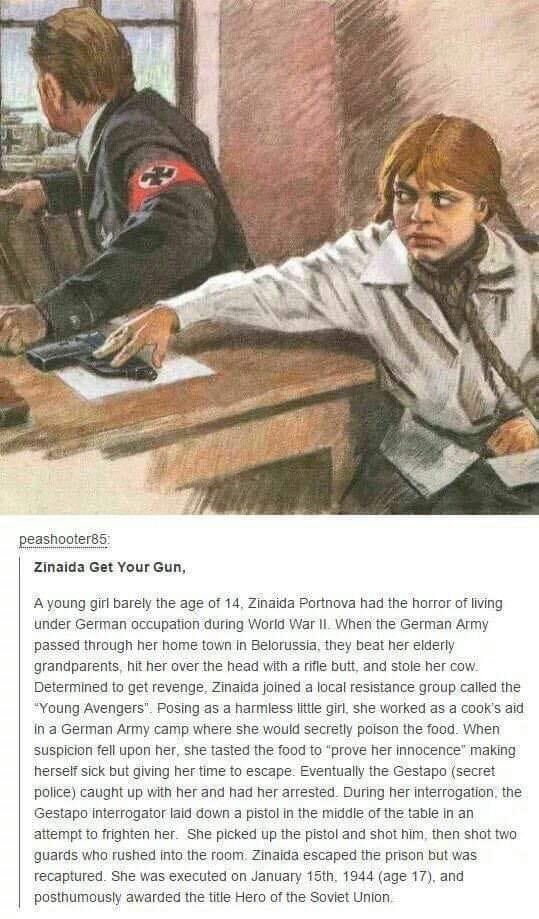 The screenshot and story also appeared on Reddit’s r/HumansBeingBros on October 16 2019, and on r/todayilearned on October 5 2019:

TIL that a Soviet teenager Zinaida Portnova killed over 100 Nazis by poisoning them, Betrayed and captured, she is said to have shot the Nazi detective who captured her. from todayilearned

Under the image of the girl reaching for a gun and a Nazi officer looking the other way, text read:

Zinaida Get Your Gun,
A young girl barely the age of 14, Zinaida Portnova experienced the horror of living under German occupation during World War II. When the German Army passed through her home town in Belorussia, they beat her elderly grandparents, hit her over the head with a rifle butt, and stole her cow. Determined to get revenge, Zinaida joined a local resistance group called the “Young Avengers”. Posing as a harmless little girl, she worked as a cook’s aid in a German Army camp where she would secretly poison the food. When suspicion fell upon her, she tasted the food to “prove her innocence” making herself sick but giving her time to escape. Eventually the Gestapo (secret police) caught up and arrested her. During her interrogation, the Gestapo interrogator laid down a pistol in the middle of the table in an attempt to frighten her. She picked up the pistol and shot him, then shot two guards who rushed into the room. Zinaida escaped the prison but was recaptured. She was executed on January 15th, 1944 (age 17), and posthumously awarded the title Hero of the Soviet Union.

As the screenshot suggested, the image and text were taken from a Tumblr post that was originally published in November 2015. The illustration was one of two images with the post:

The black and white photograph also appeared in a September 2011 Cracked.com listicle, titled “5 Untrained Civilians Who Took On Armies.” Portnova was ranked fourth, and the site stated:

What Zinaida Portnova’s story lacks in scope it makes up for in its perfect, almost cliche resemblance to an action movie.

In 1941, about the same time that guy above [on the list] was blowing up his first Nazi in Greece, Germany decided to invade the Soviet Union. Zinaida Portnova, a 15-year-old girl away at Soviet summer camp (which was probably even less fun than it sounds), was caught by surprise and tried to get home to Leningrad, only to find the Nazis blocking her way and preparing to siege the city. With nowhere else to go, she joined the Belarus underground as part of a unit nicknamed the Young Avengers.

Being essentially kids, they started off small, distributing underground leaflets and occasionally sabotaging an enemy truck or motorcycle in their base region of Vitebsk. When Zina turned 17, she was promoted to scout, responsible for venturing out into the field to look for possible targets, and getting away with it because, let’s face it, she was adorable.

However, in December 1943 she was finally caught scoping out a new target for the underground. She was taken to a nearby village and interrogated by the Gestapo. While being grilled by her captors for answers, she suddenly spotted an officer’s pistol sitting on the table right next to her. Oh, yes, this happened.

Taking a page from every spy movie that has ever existed, she snatched up the gun and blasted the interrogator and two armed soldiers, whose sole job in the entirety of World War II was to make sure this exact thing would not happen.

She managed to escape out the window, but ran into a few competent Nazis outside and was recaptured. While it didn’t end happily for Zina (she was executed the next year), her story inspired future resistance fighters and she was eventually made a hero of the Soviet Union in 1958.

Although some of the backstory was different (but not in a conflicting way), the central elements of the retelling were the same. Portnova, purportedly chagrined at the Nazi presence in Belarus, joined an underground resistance group known as the “Young Avengers.” She was captured in December 1943 and questioned by the Gestapo, at which time she gained control of a gun and shot an officer and two guards. Although Portnova initially escaped, she was later captured and executed.

Details of Portnova’s life, including accounts of her poisoning German soldiers, appeared in the 2012 book Heroines of the Soviet Union 1941-45. On page 54, the book describes Portnova as a member of Komsomol, a political organization for Soviet youth at the time. According to the book, Portnova began participating in resistance activities in 1942, after witnessing the brutal manner in which her grandmother was treated by occupying troops.

In 1943, she secured employment as a kitchen aid with access to the rations of enemy soldiers. During August of that year, many of the soldiers were sickened and some died after Portnova contaminated the food. To prove her innocence when accused of poisoning the men, she consumed some of the tainted food, but did not fall ill immediately. Portnova later was sickened, but survived and did not return to her job, subsequently engaging in reconnaissance missions.

According to that account, Portnova was captured in January 1944, not December 1943; both are mentioned on her Wikipedia page. The latter was shared to Reddit’s r/todayilearned in early October 2015, causing some confusion around the claim that Portnova killed more than a hundred Nazis with poison. The quoted text actually added that casualty number to other acts with which Portnova assisted:

In 1942 Portnova joined the Belarusian resistance movement, becoming a member of the local underground Komsomol organization in Obol, Vitebsk Voblast, named Young Avengers. She began by distributing Soviet propaganda leaflets in the German-occupied Belarus, collecting and hiding weapons for Soviet soldiers, and reporting on German troop movements. After learning how to use weapons and explosives from the older members of the group, Portnova participated in sabotage actions at a pump, local power plant, and brick factory. These acts are estimated to have killed upwards of 100 German soldiers.

Portnova was captured by the Gestapo upon her return. Both the book and Wikipedia provide a similar account of what happened next, the latter explaining:

Reports of her escape vary. One is that, during Gestapo interrogation in the village of Goriany, she took the investigator’s pistol off the table, then shot and killed him. When two German soldiers entered after hearing the gunshots, she shot them as well. She then attempted to escape the compound and ran into the woods, where she was caught near the banks of a river.

Another version is that the Gestapo interrogator, in a fit of rage, threw his pistol to the table after threatening to shoot her. Taking the pistol, Portnova shot him. Escaping through the door, she shot a guard in the corridor, then another in the courtyard. After the pistol misfired when Portnova attempted to shoot a guard blocking her access to the street, she was captured.

In most accounts of Portnova’s capture, she is said to have shot and killed two Gestapo officers and two guards before escaping into a nearby wooded area. Portnova was eventually recaptured, and executed in January 1944.

An archived Belarus museum site notes that she was tortured before her execution:

Together with Nina Davydova, she managed to carry out a sabotage, as a result of which about 100 Nazis were killed. After this operation, she went into a partisan detachment. Since 1943, the scout of the partisan detachment named after K. E. Voroshilov brigade them. V. Lenin, Vitebsk region A member of the Komsomol since 1943 on August 27, 1943, in a letter to her parents in besieged Leningrad, she wrote: “Mom, we are now in a partisan detachment. Together with you we beat the Nazi occupiers … “In December 1943, Zina was given the task of sneaking into the enemy garrison located in the village of Obol, find out the reasons for the failure of the underground youth organization and establish new connections. The task was completed. But upon returning to the detachment, Zina was captured by the Nazis. The Nazis interrogated the girl for a long time in Oboli, then transferred to the village of Gorany, and later to the Polotsk prison. Interrogations were accompanied by continuous beatings and inhuman torture.

Varied social media posts about Zinaida Portnova were mostly accurate. Portnova is believed to have in part been inspired by occupying forces’ treatment of her grandmother to participate in resistance efforts in a group called the Young Avengers. She found a job enabling her to contaminate enemy soldiers’ food, killing as many as 100. Portnova was captured in either December 1943 or January 1944, just prior to her 18th birthday. During that interrogation, she is said to have shot four men before her escape and recapture. Portnova was executed in January 1944, and later honored as a hero.