On May 18 and 19 2022, a number of posts on Imgur and Twitter asserted that “192 Republicans” voted against funding to address an ongoing baby formula shortage:

Why did 192 Republicans vote against a $28 million emergency fund to address the baby formula shortage?

In the course of an unrelated fact check on May 18 2022, we mentioned pending bills addressing the formula shortage:

After suspension debate [on May 18 2022], the House will begin one hour of debate on the Rule providing for consideration of H.R. 350 – Domestic Terrorism Prevention Act of 2022, H.R. 7790 – Infant Formula Supplemental Appropriations Act, 2022, and H.R. 7688 – Consumer Fuel Price Gouging Prevention Act.

On May 19 2022, “192 Republicans” appeared in a number of tweets mentioning the baby formula shortage. One of the “top” tweets was from C-SPAN producer Craig Caplan, and it included a screen capture of a vote:

231-192: House passes legislation providing $28 million in emergency spending to the FDA to address the baby formula shortage. 12 Republicans joined all Democrats in voting Yes. The bill now heads to the Senate. pic.twitter.com/ua6Tde0kge

According to Caplan’s tweet at 9:46 PM on May 18 2022, that the House of Representatives passed “legislation providing $28 million in emergency spending to the FDA to address the baby formula shortage”; a visible chyron read “$28 million for baby formula shortage.” Caplan further stated that twelve Republicans joined “all Democrats” in voting for the legislation, in a 231 to 192 vote in favor.

This bill provides $28 million in emergency supplemental appropriations to address the shortage of infant formula in the United States.

Specifically, the bill provides appropriations for the Food and Drug Administration (FDA) to (1) address the current shortage of FDA-regulated infant formula and certain medical foods in the United States; and (2) prevent future shortages, including by taking the steps that are necessary to prevent fraudulent products from entering the U.S. market.

An “Actions” tab led to a page on clerk.house.gov, delineating the “yea” and “nay” votes from members of Congress: 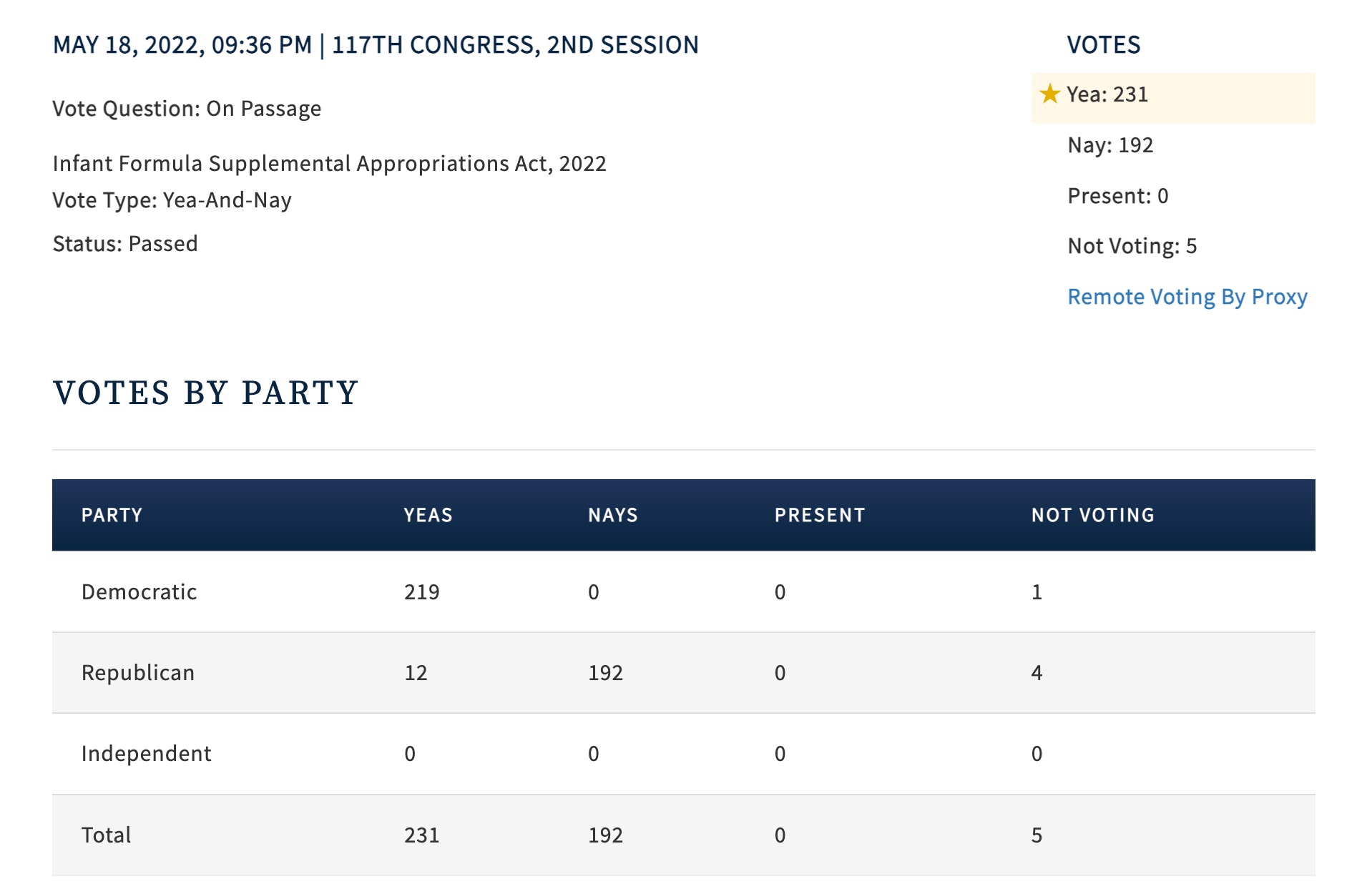 Zero votes or abstentions were recorded from any Independents. In total 231 votes (219 Democrats and 12 Republicans) were in favor, with 192 (all Republicans) against.

On May 18 and 19 2022, posts to Imgur and tweets claimed that fully 192 Republicans voted against funding to address the ongoing baby formula shortage. A roll call vote substantiated the figures — 192 Republicans voted “nay,” while twelve voted for the bill. Among Democrats, 219 voted in favor, and one abstained.