True to the nature of most disinformation campaigns, “reports” painting vaccines as deadly continue to be regurgitated thanks to right-wing social media.

Conspiracy theorists began swirling around an insert in 2013 listing the deaths of 23 seniors — out of nearly 16,000 — who took part in clinical trials involving the Fluzone high-dose flu vaccine. According to the document:

The blog “Health Impact News” published a post attacking the vaccine itself as a government “marketing campaign” abetted by retail chains like CVS and Walgreens. The post has been shared more than 23,000 times online.

In reality, a study by the Centers for Disease Control (CDC) found that between 2005 and 2014, flu vaccines prevented 40,000 deaths associated with the disease. According to the agency:

The CDC noted that the low point in this period was 2009, when the H1N1 virus (commonly referred to as the “swine flu”) originated in the U.S. The agency said:

Researchers estimated that 222 deaths were prevented by vaccination that season. Study authors attributed this to the fact that 2009 monovalent pandemic vaccine did not become widely available until well after the peak of influenza illness had occurred. Flu activity during the pandemic was dominated by 2009 H1N1 virus circulation, with almost no seasonal viruses being detected during that time.

In January 2021 conspiracy theorists pounced again onto a similar story, claiming that 23 seniors in Norway died “within hours” as a result of vaccines against COVID-19: 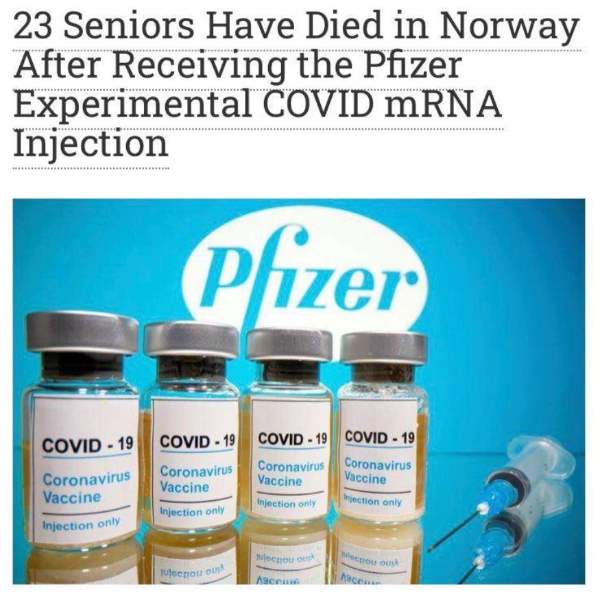 As Reuters reported, the claims were, once again, taken out of context.

Norway is vaccinating residents of care homes, including those with serious underlying diseases. On average, 400 people die each week in nursing homes and long-term care facilities in the Nordic country. Therefore, it is expected that some among this population would die from unrelated causes after receiving the vaccine.

As of Jan 18, the Norwegian Institute of Public Health had investigated 13 of the 23 reported deaths, and had not concluded that the vaccines were to blame. Camilla Stoltenberg, the head of the agency, told a news conference: “These are people who are very old, are frail and have serious diseases…It is not a given that this [the deaths] represents an overmortality or a causality.”

The Norwegian fact-checking outlet Faktisk further reported that 33 patients — out of about 48,000 in total — were reported, but not attributed to the vaccine.