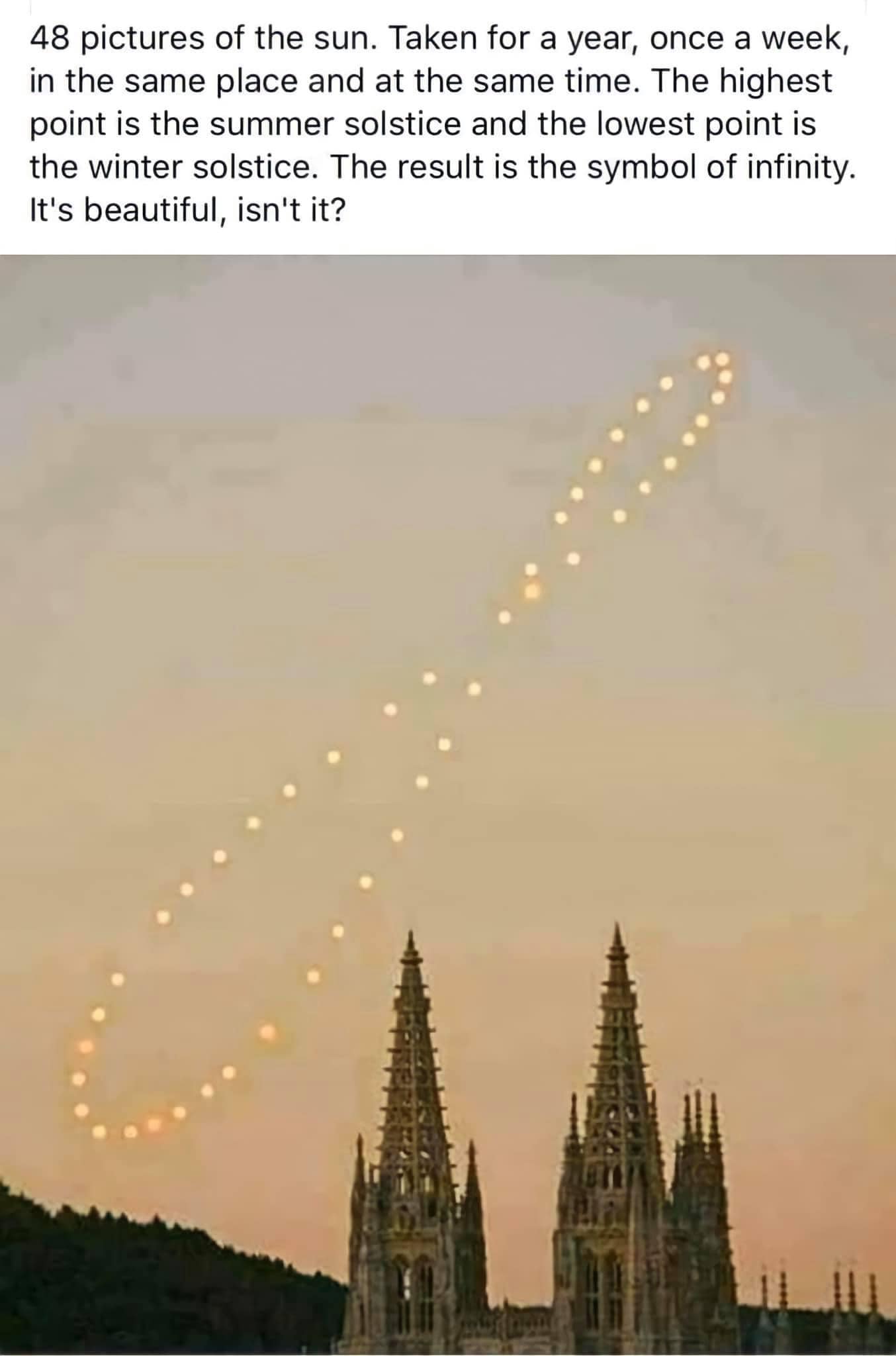 The post appeared to be a screenshot of an earlier post with text added to the image. It did not include any contextual information like the location of the photographs, and the text read:

Reverse image search indicated the image was first crawled on August 12 2013. Most of the earliest crawled iterations involved broken links, making their content and context unavailable.

Two early iterations appeared on Reddit, in February 2013 (on r/woahdude) and September 2012 (on r/pics). Both posts featured titles suggesting the celestial body depicted was Venus, not the sun (and both displayed an illegible watermark in the lower right corner):

Individual images taken of Venus in one year to create a full curve. The summer solstice being at the top, winter solstice at the bottom, and equinox where the lines cross. [PIC] from woahdude

Individual images taken of Venus in one year to create a full curve. The summer solstice being at the top, winter solstice at the bottom, and equinox where they lines cross. from pics

Incidentally, both threads’ top comment featured a fellow account asserting that “Venus” was actually the sun, describing and linking to a Wikipedia entry for “Analemma”:

In astronomy, an analemma (/ˌænəˈlɛmə/; from Ancient Greek ἀνάλημμα (analēmma) ‘support’) is a diagram showing the position of the Sun in the sky as seen from a fixed location on Earth at the same mean solar time, as that position varies over the course of a year. The diagram will resemble a figure eight. Globes of Earth often display an analemma as a two-dimensional figure of equation of time vs. declination of the Sun.

One can photograph an analemma by keeping a camera at a fixed location and orientation and taking multiple exposures throughout the year, always at the same time of day (disregarding daylight saving time, if applicable).

Image search also returned a January 2017 ClickOnDetroit.com item by meteorologist Paul North, headlined, “What in the world is this? Mysterious photo explained.” It provided a location and attribution for the image:

What you are looking at is a compilation of photos, taken by a man named Jesus Pelaez at a cathedral in Burgos, Spain, which is in the northern part of the country. Approximately once a week at the exact same time each day, he took a photo of the sun, and then superimposed the photos onto a single image.

An April 2016 tweet linked to an even earlier iteration than seen on r/pics, a blog post on the website of the paper El Correo on September 5 2012. An archived copy included the image, and its automatically translated text read:

Really beautiful photo just posted by Jesus Pelaez [in September 2021] … Burgos Cathedral appears there, along with a solar analemma. We haven’t found any technical data anywhere, but these photos are taken over the course of a year. A photo must be taken every few days at the same time. And this is the result.

A search for “‘Jesus Pelaez’ ‘Burgos Cathedral'” only returned nine results, none more informative than that earliest claim. We dug up a slightly earlier variation, apparently curated to a September 3 2021 post on an astronomy image and discussion board and possibly the image’s first iteration — however, we were unable to locate any firm attribution from that initial appearance.

A long-circulating “48 pictures of the sun” image initially began spreading in September 2012, likely after it appeared in a post on a forum for astronomy discussion. The image was attributed to Jesús Peláez, and described as a solar analemma. We were unable to find any indication the image was doctored or digitally altered, but neither did we sufficiently validate the origin of the image. Nevertheless, the “figure eight” appearance of an analemma was well-documented, as was the practice of combining multiple exposures throughout the course of a year to capture the phenomenon.