On December 20 2021, Imgur user SisterMidnight shared the image below, titled “Joaquin Oliver’s life ended at 17 years old at his high school in Parkland, Florida. His father, Manuel, sculpted this and my heart is shredded”: 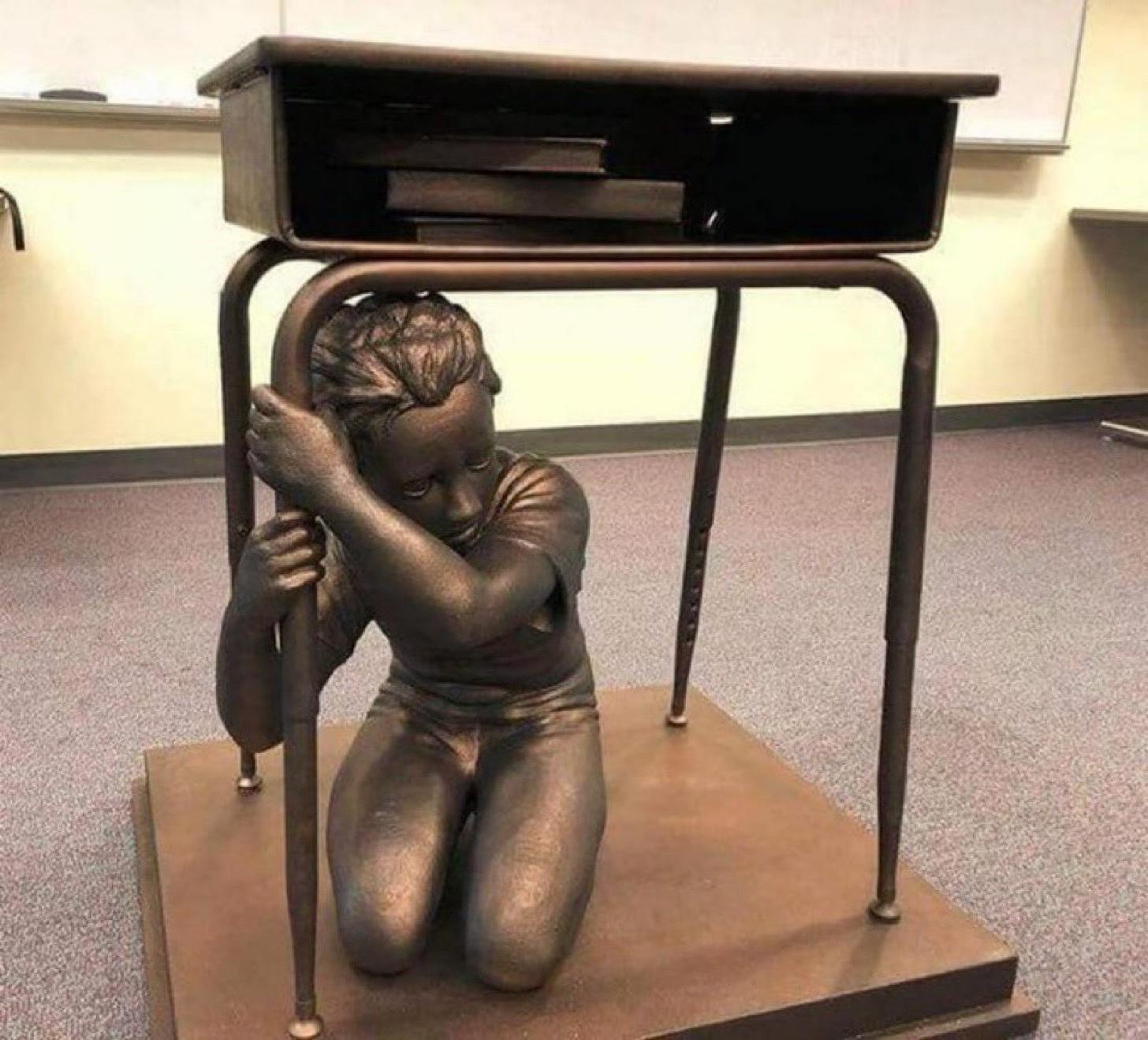 Depicting a child trying to shelter under a desk that leaves them fully exposed really [symbolizes] how unprotected our school children are.

Neither iteration (on Facebook or Imgur) included any additional information about the sculpture or its creation. However, one Imgur account linked to a September 2018 USAToday.com article, “Child hides under desk to prepare for shooting in sculpture from Parkland victim’s dad.”

The small girl cowers beneath an open school desk, clutching a leg as she gazes into the distance with a look of fear in her eyes. The scene appears in sculptures produced with the help of Manuel Oliver, an artist who lost his 17-year-old son in the Parkland, Florida, mass shooting earlier [in 2018].

[Collaborator Sean] Leonard and Oliver worked with Giffords, the gun control group founded by shooting survivor and former congresswoman Gabby Giffords, to produce 10 of the sculptures titled “The Last Lockdown.”

Etched into the tops of each desk are stats on gun violence — “22 kids are shot every day in America,” one reads — along with a number to text to prompt voter registration, according to a statement from the nonprofit.

Oliver said the art-fueled activism comes in memory of his son, Joaquin Oliver.

“It’s too late for us to save Joaquin from gun violence, but through art my family and I are making sure that we protect the rest of the kids out there,” Oliver said.

USAToday.com cited a WSL-TV article about the sculptures. It explained that the works were unveiled in September 2018, and added that real desks were combined with 3D printed figures as a nod to 3D-printed guns:

Leonard and fellow advertising professional Dan Crumrine brainstormed and came up with this project idea. Then they reached out to Manuel Oliver, whose son Joaquin was killed in the shooting in Parkland, Florida. They said Oliver encouraged them to broaden the project’s impact, leading to a partnership with the Giffords nonprofit, and the deployment of 10 identical sculptures across the country.

These are multimedia pieces of art. Leonard and Crumrine said the desks are actual school desks. The girls, however, were 3D-printed; a deliberate symbol in light of recent debate over legalizing 3D gun-printing designs’ being published.

It wasn’t clear why the posts circulated in December 2021, but the sculpture itself was real, and Manuel Oliver was involved with the project. The project went on display in September 2018, about seven months after the Parkland shooting. The project’s creators fabricated the sculptures from more than one medium — the desks were real desks, and the figures were 3D printed to acknowledge use of that medium to print guns. Although the statue was not “sculpted” from clay or metal, it was a sculpture consisting of mixed materials. Additionally, Joaquin Oliver’s father Manuel Oliver collaborated on the project.