As conspiracy theories — fanned in part by public figures — continue spreading, feeding into a feverish, misdirected blame leveled at mobile phone towers for the COVID-19 pandemic, authorities in Great Britain are investigating a spate of fire attacks and harassment of tower engineers.

A spokesperson for the British government told CNBC that they expected to see “social media companies acting responsibly and taking much swifter action to stop nonsense spreading on their platforms” following the rash of fires. Both CNBC and the BBC reported that four fires affecting towers were set in early April 2020.

Stephen Powis, director of the country’s National Health Service, said at an April 5 2020 press conference that 5G towers were crucial for both healthcare providers and the general population.

“I’m absolutely outraged and disgusted that people would be taking action against the infrastructure we need to tackle this emergency,” Powis said. “This is not acceptable and only impacts on our ability as an industry to maintain the resilience and operational capacity of the networks to support mass home working and critical connectivity to the emergency services, vulnerable consumers and hospitals.”

This is the consequence of those bonkers Facebook conspiracy theories about 5G. Key workers getting harassed on the street. pic.twitter.com/5z35r6sabp

In March 2020, the International Commission on Non‐Ionizing Radiation Protection, a group monitoring radio waves for safety concerns, determined that 5G mobile networks (which are carried by these waves) pose no danger to human beings.

But despite a lack of any scientific evidence that 5G networks are harmful — let alone that it is spreading a fatal pandemic around the world — disinformation has continued to swirl online, aided in part by entertainers and other public figures.

As The Daily Beast reported, actor Woody Harrelson falsely linked the disease to cell phone technology in a post wrongfully showing footage from a 2019 protest in Hong Kong and insinuating that the Chinese government had taken down at least 58 cell phone towers in response to the disease. In England, Britain’s Got Talent judge Amanda Holden was accused of fear-mongering after sharing a petition linked to conspiracy theorists calling for 5G to be banned in the country entirely.

While social media companies like Facebook and Twitter have claimed they are working to curb the spread of disinformation concerning COVID-19, posts linking it to 5G continue to spread on both platforms, with some users going so far as to claim that “covfefe” — a 2017 misspelling in a tweet from United States President Donald Trump — was meant to represent his effort to fight the pandemic: 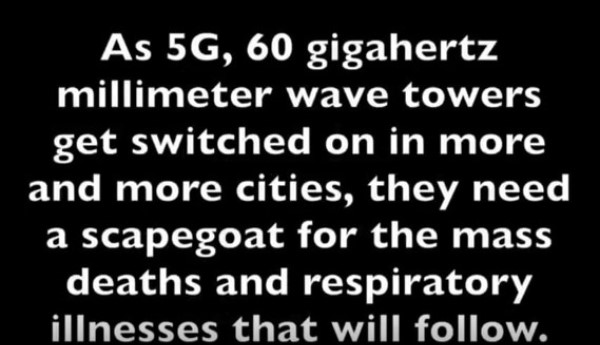 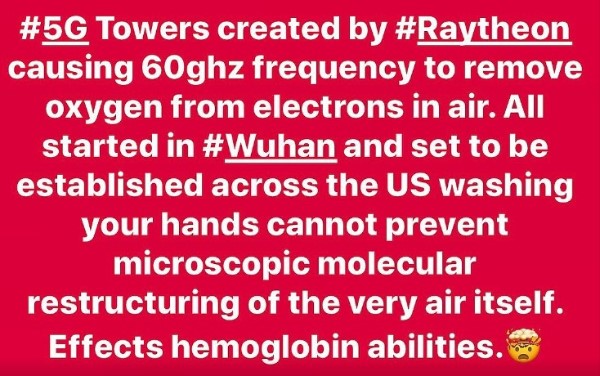 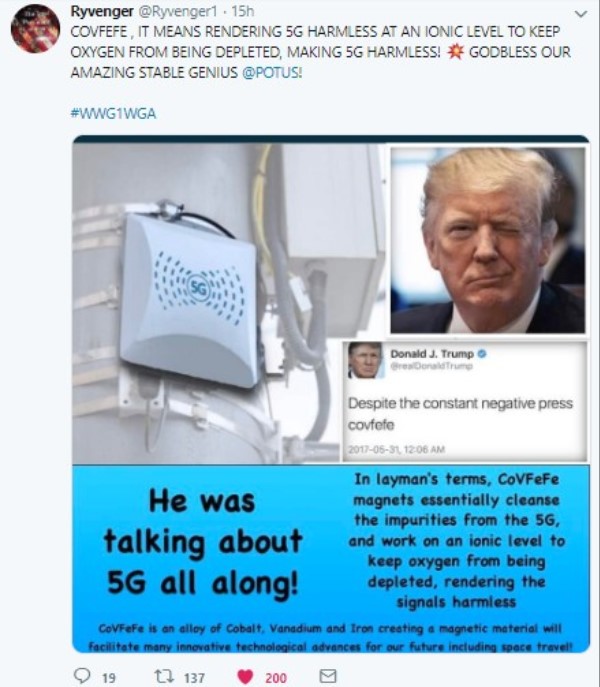 Another platform, YouTube, announced on April 6 2020 that it would delete videos pushing the same false claim.

“We’re committed to providing timely and helpful information at this critical time, including raising authoritative content, reducing the spread of harmful misinformation and showing information panels, using NHS and WHO data, to help combat misinformation,” a spokesperson told Business Insider.