A photograph shows 71-year-old U.S. President Donald Trump waiting aboard Air Force One at 2am to welcome three American hostages after being awake for more than 20 hours. 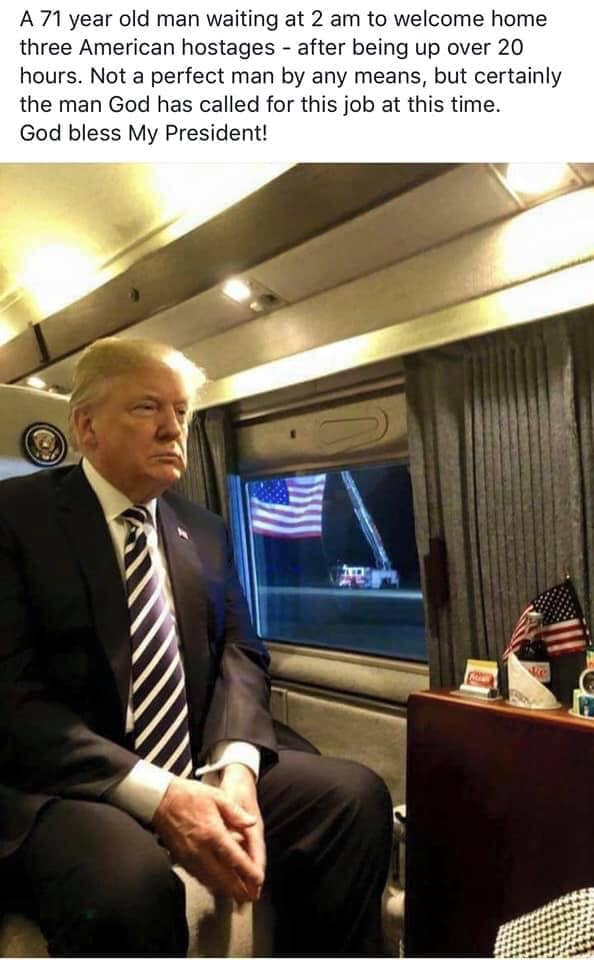 The text on the meme read:

A 71 year old man waiting at 2 am to welcome home three American hostages – after being up over 20 hours. Not a perfect man by any means, but certainly the man God has called for this job at this time. God bless My President!

A search for the text of the meme pointed to a May 14 2018 Facebook post by Sid Miller (@MillerForTexas), including a slightly sharper version of the photograph and almost identical text:

A 71 year old man waiting at 2 am to welcome home three American hostages – after being up over 20 hours.

Not a perfect man by any means, but certainly the man God has called for this job at this time.

Miller’s original post accrued nearly half a million shares, but neither iteration — October 2019 or May 2018 — included a backstory about the image or the scenario the text purported to describe. However, a stock image site featured the image, along with a press-style caption for it:

Joint Base Andrews May 10, 2018.
U.S. President Donald Trump aboard Marine One after landing at Joint Base Andrews to welcome home three American detainees May 10, 2018 in Clinton, Maryland. Three detainees were released include Kim Dong-chul, Tony Kim and Kim Hak-song as a gesture of goodwill ahead of the planned meeting between Trump and North Korean leader Kim Jong-un. Credit: Planetpix/Alamy Live News – Image ID: MM7PRJ

On May 9 2018, KGO-TV reported on developments involving the release of the three men mentioned in the caption, including a tweet by Trump:

President Donald Trump on [May 9 2019] announced that three Americans who had been detained in North Korea, Kim Dong Chul, Tony Kim and Kim Hak Song, are now on their way home.

I am pleased to inform you that Secretary of State Mike Pompeo is in the air and on his way back from North Korea with the 3 wonderful gentlemen that everyone is looking so forward to meeting. They seem to be in good health. Also, good meeting with Kim Jong Un. Date & Place set.

Trump tweeted this statement at 5:30am Pacific time (2:30am Eastern) on May 9 2018. NPR reported the three men were expected to land at Joint Base Andrews in Maryland between 2am and 3am local time on May 10 2018.

Three Americans released by North Korea were being assessed at a US military hospital on [May 10 2018], not long after landing in the US in the early hours of the morning, with Donald Trump waiting on the tarmac to greet their plane.

The three men emerged from a US government plane, flashing peace signs high above their heads. A huge US flag hung between two fire trucks served as a backdrop against the night sky.

On behalf of the American people, WELCOME HOME! pic.twitter.com/hISaCI95CB

Miller’s original Facebook post in May 2018 claimed: Trump was “a 71 year old man” at the time the photograph was taken, that it showed him “waiting at 2 am to welcome home three American hostages,” and that Trump waited “after being up over 20 hours.”

President Trump turned 73 in June 2019, meaning he was 71 in May 2018. Although the image was not time-stamped, it fit into the two to three am window cited in news reports. The three hostages released were Americans, and Trump tweeted at 7:30 am (20 hours earlier than his appearance at Joint Base Andrews.)

In the post, Miller said Trump had been awake for 20 hours. Trump published several tweets between 7 and 8am Eastern time on May 9 2018, again about 20 hours before the hostages touched down on American soil around 3 the following morning:

Congratulations to Mike Dewine on his big win in the Great State of Ohio. He will be a great Governor with a heavy focus on HealthCare and Jobs. His Socialist opponent in November should not do well, a big failure in last job!

The Fake News is working overtime. Just reported that, despite the tremendous success we are having with the economy & all things else, 91% of the Network News about me is negative (Fake). Why do we work so hard in working with the media when it is corrupt? Take away credentials?

The Republican Party had a great night. Tremendous voter energy and excitement, and all candidates are those who have a great chance of winning in November. The Economy is sooo strong, and with Nancy Pelosi wanting to end the big Tax Cuts and Raise Taxes, why wouldn’t we win?

Candace Owens of Turning Point USA is having a big impact on politics in our Country. She represents an ever expanding group of very smart “thinkers,” and it is wonderful to watch and hear the dialogue going on…so good for our Country!

Although the screenshot was slightly inaccurate in a technical sense upon its reposting in October 2019, it was not false when posted and remains broadly true. The screenshot of the post was published in May 2018, the same month Trump (who was 71 at the time) greeted three American hostages on their arrival at Joint Base Andrews in the early hours of May 10 2018. Trump was up and tweeting 20 hours earlier, publishing four tweets between 7 and 8am Eastern Time on May 9 2018. Roughly 20 hours later, he was waiting aboard Air Force One for the arrival of the three men.