A photograph shows a border crossing between Canada and the United States.

On October 20 2019, a Facebook user shared the following meme which showed a snowy road labeled “This is the United States” to the left side, and “This is Canada” to the right: 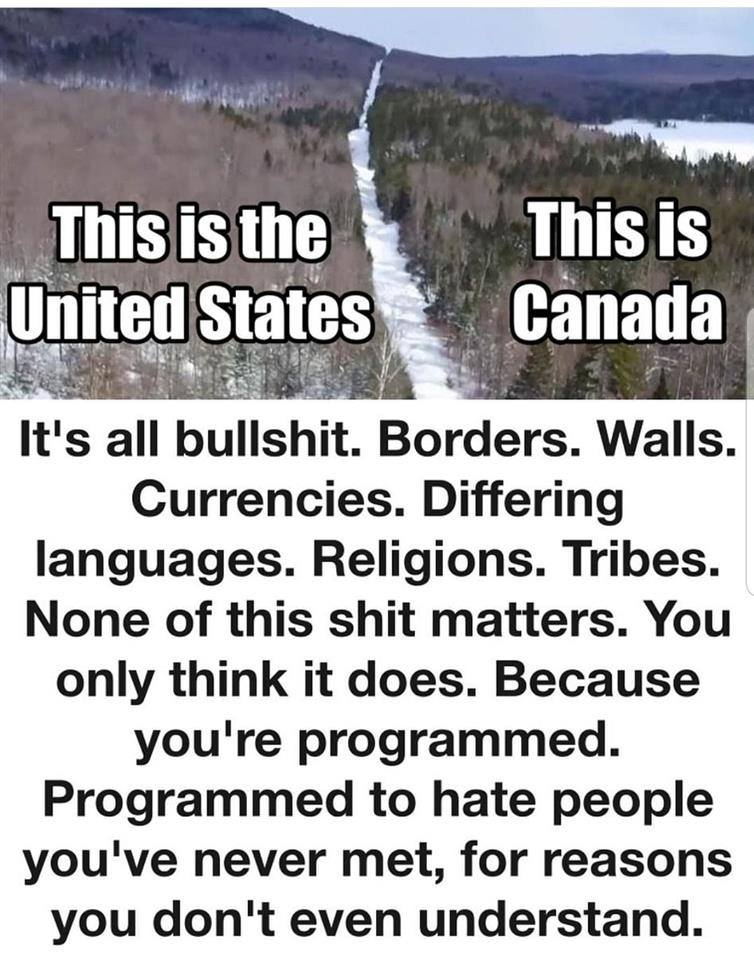 Underneath the photographic portion of the meme, text read:

It’s all bullshit. Borders. Walls. Currencies. Differing languages. Religions. Tribes. None of this shit matters. You only think it does. Because you’re programmed. Programmed to hate people you’ve never met, for reasons you don’t even understand.

A second excerpted portion of the meme was more philosophical in nature, decrying the willingness of people to support the construction of artificial barriers between countries. But the top part of the meme contained a photo and a claim that it showed the United States on the left or southern side, and Canada to the north and right.

That image, oddly enough, returned no retrievable results on two separate image search engines. Eventually we uncovered a filename matching it and located it as a still from an NBC News video titled “Why migrants are going to Canada to enter the U.S.,” published on March 9 2019.

A still version of the image was visible in embedded versions of the clip and is seen above. That imagery appeared briefly at the beginning of the two-minute long clip, and what looked like moving aerial video footage of the same stretch of road appeared for several seconds after the 1:07 mark: 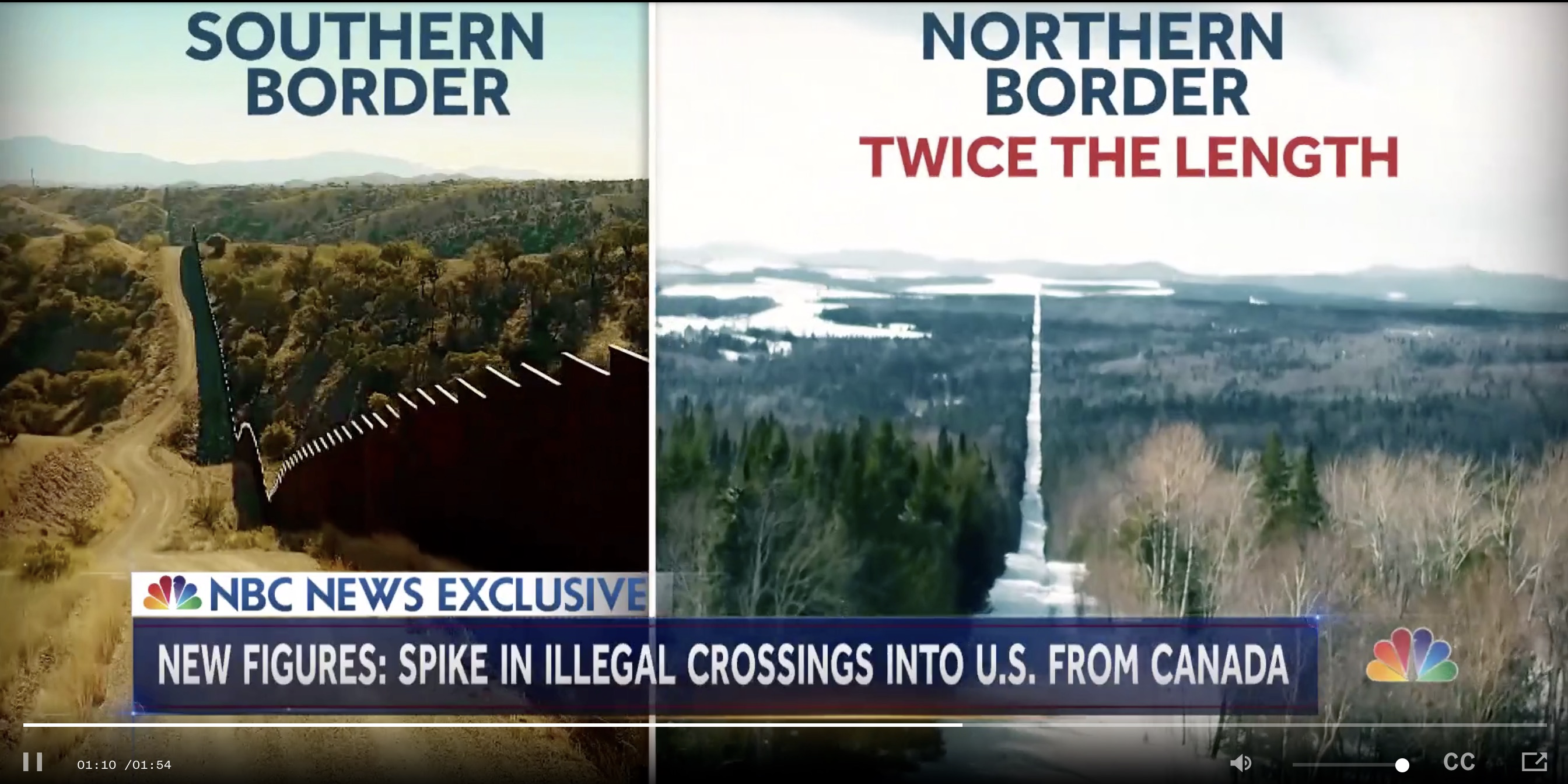 Similar imagery appeared a third time around the 1:48 mark, just before the video ended. Portions of the segment in the last quarter of the video indicated the reporting involved occurred in Derby Line, Vermont. Derby Line shares a border with the Canadian town of Stanstead, Quebec, connecting Vermont’s U.S. Route 5 with Quebec’s Route 143.

Official border stations are located on both the United States and Canada sides of the Derby Line border, and the American side was partially repurposed due to a drop in border crossings:

The U.S. border station stands about 300 feet (91 m) south of the border, on the west side of U.S. Route 5. Its main building is a two-story brick Georgian Revival structure with a hip roof. A metal porte-cochere extends across two lanes, diverted from the roadway for the processing of incoming vehicles. Behind the main building stand an eight-bay vehicle inspection garage, and a wood-frame cattle inspection facility. Due to a decrease in the use of the crossing, only the southern part of the main building is used for customs and immigration; the northern portion now houses the local post office.

As of October 2019, there were 119 operational legal land border crossings between Canada and the United States, many of which have varying requirements for crossers to report their crossings to officials in either country. There are two one-way crossings (one in New York and one in New Brunswick), and Derby Line itself is home to one of a few “cross-border buildings,” structures that span the border to exist in both countries:

The Haskell Free Library and Opera House straddles the border in Derby Line, Vermont, and Stanstead, Quebec. Private homes are divided by the International Boundary line between Estcourt Station, Maine, and Pohénégamook, Quebec. Private homes between Beebe Plain, Quebec and Beebe Plain, Vermont; a seasonal home between Alburgh, Vermont, and Noyan, Quebec, at the intersection of Matthias Lane in Alburgh and Chemin au Bord de l’Eau in Noyan; and one house between Richford, Vermont, and Abercorn, Quebec, are also divided by the border.

The Halfway House, a tavern also known as Taillon’s International Hotel, straddles the border between Dundee, Quebec, and Fort Covington, New York. It was built in 1820, before the border was surveyed.

NBC News did not elaborate on the source for an image and footage used in its video about crossings between the border of the United States and Canada, and we were unable to determine precisely where it was filmed. The clip itself in part featured the border town of Derby Line, Vermont, which features one of nearly 120 official crossings between Canada and the United States. Several crossings do not require crossers to report, however, and several buildings and airports straddle the border of the United States and Canada. We are not certain whether this particular road shows the exact location of the international border; therefore, we rate this claim Unknown.