On October 8 2019, a Reddit user shared the following animated image to r/gifs, purportedly showing former United States president Jimmy Carter building homes for Habitat for Humanity while still visibly recovering from a fall-related injury (as evidenced by a black eye):

According to the title, the image showed Carter just one day after a fall sufficiently severe to cause deep bruising on his left eye. A similar post proved popular the following day on Imgur, titled simply “Be like Jimmy”: 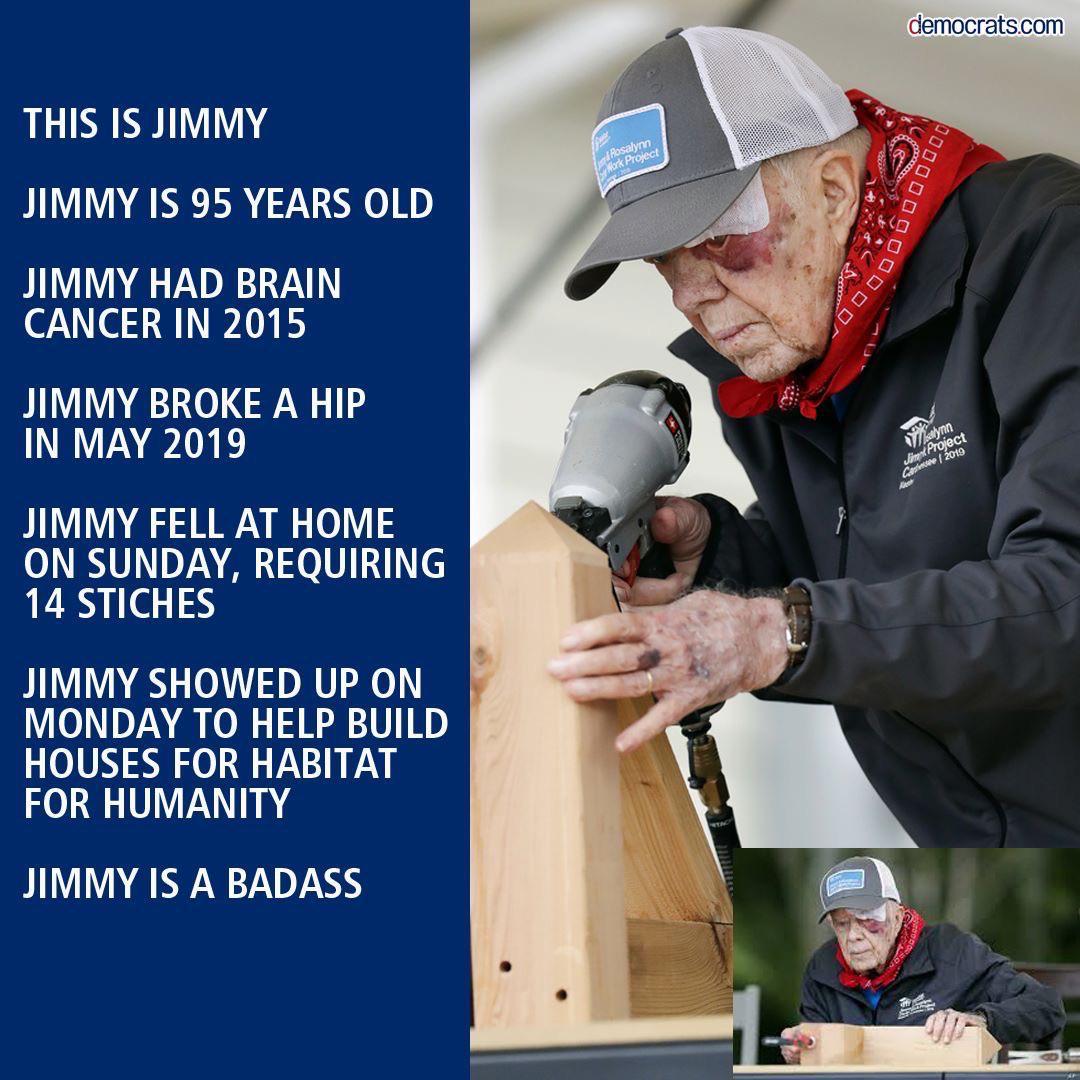 Text to the left of two images of Carter (and his black eye) read:

JIMMY HAD BRAIN CANCER IN 2015

JIMMY IS A BADASS

Much of the meme was reasonably easy to verify, but not as easy as it first appeared. While the meme stated Carter was 96, Google users would likely find a top result and a feature box claiming Carter was 94 or 95 respectively: 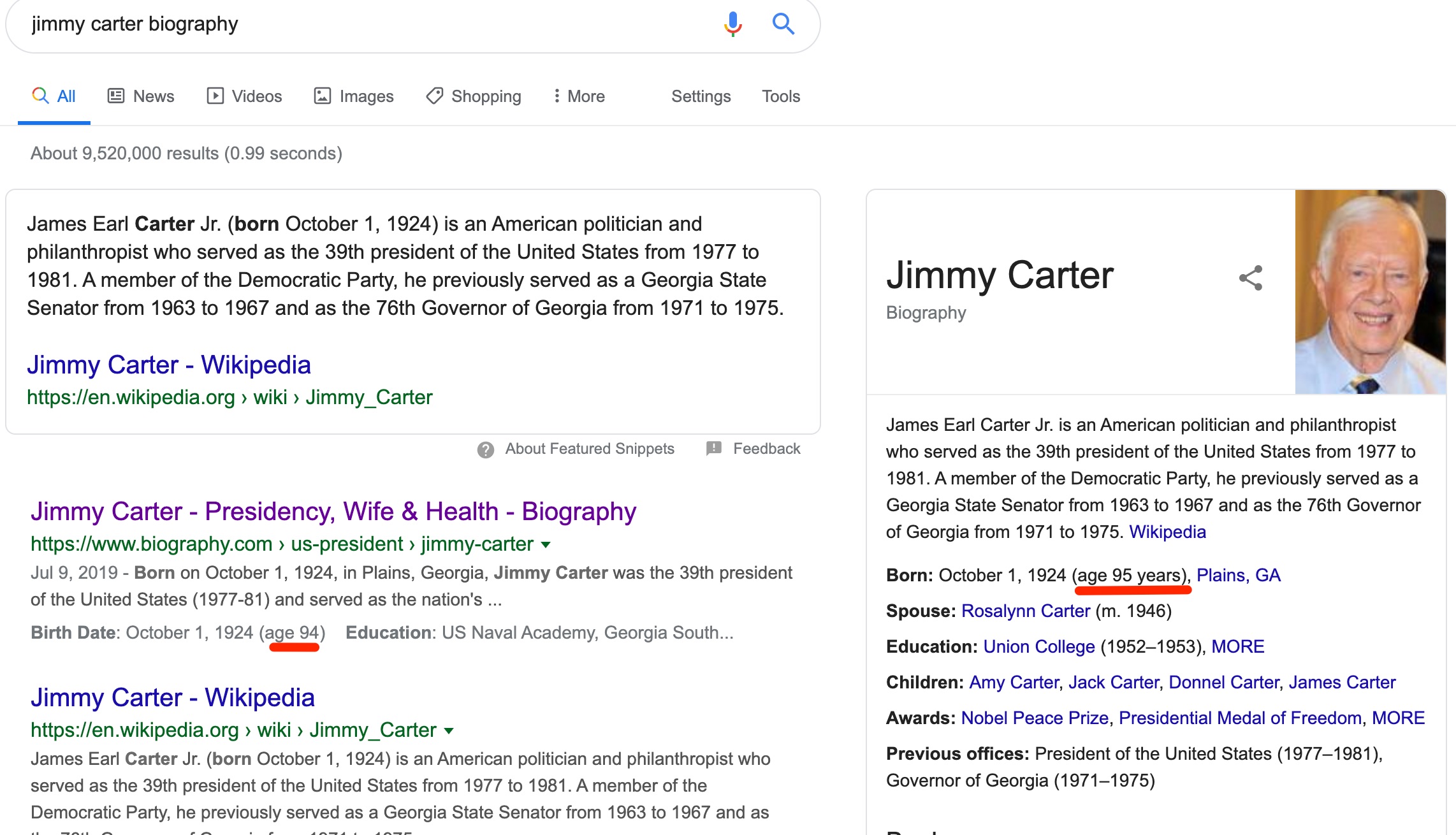 Jimmy Carter was born on October 1 1924, the likely reason for October 2019 pages that misstated his age. The Reddit post correctly described his age (95), but when the claims appeared in an Imgur meme the following day, his age was miscalculated as 96.

That article also mentioned that Carter still managed to attend a Habitat for Humanity event on the night he was injured:

Mr. Carter appeared at the ceremony with a black eye and a bandage. He received 14 stitches. Despite his injuries, the Carters said volunteering was their top priority. The Nashville project marked Mr. Carter’s 36th build.

The same article also mentioned Carter’s 2015 “dire cancer diagnosis,” as well as a May 2019 hip replacement:

Mr. Carter survived a dire cancer diagnosis in 2015 and surpassed George H.W. Bush as the longest-lived U.S. president in history this spring. He has had some trouble walking after a hip replacement in May [2019], but regularly teaches Sunday School.

In late August 2019, CNN reported Carter was busy building with Habitat for Humanity after hip surgery following a fall in May 2019:

Former President Jimmy Carter, who underwent hip surgery last spring [2019] following a fall, plans to resume his decades-long role as a volunteer house builder with Habitat for Humanity this fall [2019], a spokeswoman for the Carter Center confirmed to CNN [in August 2019].

CNN added that Carter and former First Lady Rosalynn Carter have been volunteering with the organization since 1984:

Together, they’ve worked alongside “more than 103,000 volunteers in 14 countries to build, renovate or repair 4,331 homes,” according to a fact sheet from the organization. In 2017, the former president was admitted to a hospital in Winnipeg, Canada, after becoming dehydrated while working outdoors for Habitat. He was released the following day.

CNN noted that in addition to a 2015 brain cancer diagnosis, Carter also underwent surgery that same year on his liver — a detail not mentioned in the meme:

In addition to the hip surgery earlier [in 2019], Carter has also undergone several other medical treatments, including successful treatment in 2015 for cancer spots on his brain and a separate operation that same year to remove a “small mass” from his liver.

The meme’s final claim was that it, like the Reddit post, showed Carter building homes one day after his October 2019 injury. According to TIME and People, that claim was also accurate:

With a bandage above his left eye and a large, red welt below it, former President Jimmy Carter was greeted by a cheering crowd Monday morning [October 7 2019] as he prepared to help build a home with Habitat for Humanity in Nashville.

Carter fell at home on Sunday [October 6 2019], requiring 14 stiches, but he did not let his injuries keep him from participating in his 36th building project with the nonprofit Christian housing organization. He turned 95 last Tuesday [October 1 2019], becoming the first U.S. president to reach that milestone.

People reported that Carter acknowledged his injury before the building began:

As he addressed the tumble and his newly-bruised face, Carter said nothing could keep him from making the trip to Tennessee to help build homes.

“I wanna explain my black eye,” he said, according to video of his remarks. “I got up this morning … I was getting ready for church, right after that we had a family reunion and we were coming to Nashville.”

“I fell down and hit my forehead on a sharp edge and I had to go to the hospital,” Carter explained. “And they took 14 stitches in my forehead and my eye’s black, if you noticed.”

“But I had a No. 1 priority and that was to come to Nashville to build houses!” he added.

A Reddit post said that an animated GIF showed Jimmy Carter at age 96, building houses one day after he was injured in a fall, which is correct. A subsequent Imgur meme misstated Carter’s age, but added that he was diagnosed with brain cancer in 2015 (true) and that he broke a hip in May 2019 (also true.) Images of Carter’s black eye at a Habitat for Humanity building site were published in news coverage of his appearance at the charity’s worksite.