In early October 2019, the Facebook disinformation page “ForAmerica” shared the following meme, insisting that it shows a “pro-life sculpture” called “the neverborn child”:

Captions added to the image and a status update read:

As it was presented and shared in the United States, the claim was similar to one about an empty cradle purportedly representing “aborted children.” No further information about the artwork — even basic details, such as where the sculpture is displayed — nor any news links about it accompanied the post.

We did a reverse image search to find earlier versions of the sculpture and possibly uncover more information about its creator. A February 2017 post to Reddit’s r/pics included the image and discussion about its meaning:

A monument in Slovakia. It’s called "The Child who was Never Born." from pics

In a comment, a Redditor acknowledged that readers readily inferred it was about abortion:

So, another take on this, and the one I took away when I saw this monument, is that this represents a child never born because they either were not conceived, were stillborn, or were lost early. As someone who has had multiple miscarriages and is still trying for our first after ten years, I saw it in a completely different way than most who have already commented.

In our initial search, we located two previous “meme” versions of the sculpture — both featuring a different claim about the piece: 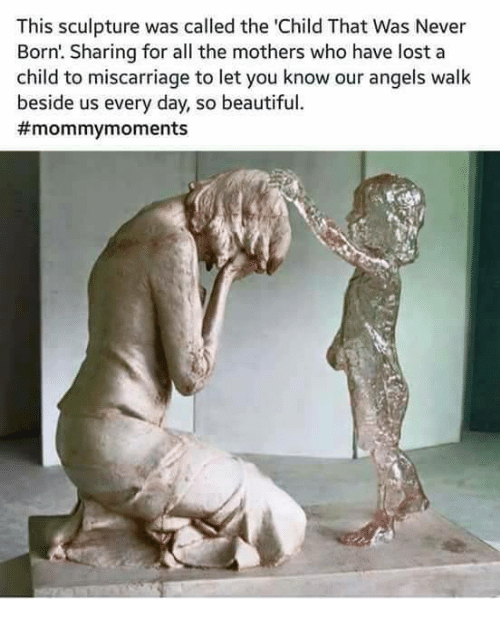 “The Child Who Was Never Born” a statue of a woman after a miscarriage.

This sculpture was called ‘Child That Was Never Born.’ Sharing for all the mothers who have lost a child to miscarriage to let you know our angels walk beside us every day, so beautiful #mommymoments

Immediately, we had two conflicting explanations for the sculpture. One was that a “pro-life sculptor” created it as an unfortunately “necessary” message about abortion, the other that the work was intended to comfort grieving mothers of miscarried babies.

On blogs and websites, the sculpture was presented in both contexts. A 2015 blog post to a therapy practice’s site described it in a post simply titled “Lost Children,” implying that it carried a more inclusive message:

It is a beautifully poignant sculpture and I simply invite you to look at the image and ponder whatever lies in your heart.

Another 2015 post on an anti-abortion, Catholicism-centric site included quotes from sculptor Martin Hudacek. Hudacek is Slovakian, and abortion is a topic handled differently both legally and culturally in Slovakia. Although opposition to abortion exists, the political landscape is not analogous to that of the United States:

Abortion laws in Slovakia are relatively liberal compared to those in countries like Poland or Malta, which have among the strictest laws in the European Union and often allow them only in cases like rape.

It’s worth noting that any explicit mention of abortion is not a direct quote, instead inferred and interspersed into half-sentences and other remarks by Hudacek. That post was titled “With a child’s touch, sculpture seeks to comfort those who mourn abortion”:

He told [the site] that a friend inspired the project.

“It all began when on my way back home from my friend’s place who prays and meditates a lot, (and) he told me I have to carve a statue” that depicts the effects of post-abortion syndrome, “a big problem and there is no such statue regarding this issue.”

Hudacek said that he was “touched in such way that I wanted to make a monument for the unborn children,” but he had no idea where to start. He asked people to pray.

“I was praying and many people came to me and said I need a picture of forgiveness,” he said. As time passed, the image became clearer and clearer in his mind: “it looked like a crying mother and a child who forgives her.”

The two primary interpretations (abortion and miscarriage) seemed to be reflected in Hudacek’s account of the sculpture’s effects on people who view the sculpture:

That was again evident in subsequent quotes from Hudacek, alongside information about a version of the sculpture placed in a cemetery. That site reported that the third iteration showed “a father alongside the grieving mother and their aborted child.” But that statue was actually placed at the grave of a child who was miscarried or stillborn, not aborted:

[In October 2015] Hudacek completed a third version of the “Memorial for Unborn Children” statue. This edition is seven feet tall. But there is an addition: it shows a father alongside the grieving mother and their aborted child.

This statue now sits inside a cemetery in Wroclaw, Poland, where it has been placed above the crypt of a child who died before birth. This particular statue was done “only for the people in Wroclaw,” explained the artist, who currently lives in the small Slovakian village of Telgárt.

In 2012 Hudacek’s brother (not Hudacek himself) referenced abortion in response to a question from an American anti-abortion website. On his site, Hudacek references the globally-recognized statue in his biography, alongside a separate work with a theme of infant and child spirits comforting bereaved parents:

… In 2012 [Hudacek] graduated from the Academy of Arts in Banská Bystrica, department of sculpture. His debut, The Memorial of Unborn Children, was created as a bachelor thesis. Master thesis is called, “As a Child”. It’s a baby that falls from the stand. She has no fear, she is smiling and held out her hand. She knows that the parent is close and will catch her.

In a 2012 interview with a blog, Hudacek described the same inspiration he mentioned in the half-quoted 2015 interview linked above:

Martin got the idea for the sculpture as he was walking home one day. He met up with a friend that encouraged him to make a memorial for unborn children. At first, Martin resisted the idea. The idea persisted. It resided in his heart in a way that couldn’t be resisted – one of those quite whispers that are hard to ignore – the kind of whisper that you attribute to the Creator alone. Martin gives God the credit for the decision to make this sculpture his “bachelor’s study work[.”]

In 2014, Hudacek answered questions about his work and the sculpture in a lengthy interview [PDF] with a religious magazine. Of the piece’s creation, Hudacek described initial resistance to his concept. Later, he said, the sculpture began striking a chord globally — first in Latin America, where anti-abortion organizations first began embracing it:

The photo of the original [sculpture was] later received on the web and [spread] around the whole planet. [People] responded in particular Latin America, where the [work was discovered by] Rachel’s Vineyard dealing with the concept of a conceived child. They asked for permissions, to use the photo for their promotional material … I got a lot of newspapers every day from America, Russia, Australia, Italy, France, Spain … that this is what they are experiencing. I was delighted that The Holy Spirit has arranged it this way. I understood, that this is a topic not only for Slovakia, where it is in the beginning it was not understood. Maybe also as a result, it has expanded further. The whole thing turned around. Currently a statue recognized and incorporated into contemporary modern Art. But if it wasn’t for me in the beginning [challenged] by [my] associate professor, I do not know how turned out. [The professor] fulfilled his mission.

First of all, it moved me in the direction to support [protecting life]. The doctrine of the Church is clear: we are to protect life. But after these values ​​are so treading (wars, riots, abortions …) that today’s society cannot accept. Well, we always have to talk. Although we do not speak. Art has a way of conveying the message.

When asked about his work’s themes, Hudacek mentioned “God’s mercy” as a motivating theme:

It symbolizes that however great a sin might be, God’s mercy is greater. Pieta is installed in front of the church in Sobrance. The place is public and people can bring to it their burdens….

Hudacek’s “Memorial to Unborn Children” is often presented as a work explicitly about abortion in the politically tense debate about the topic in the United States. Sculptor Martin Hudacek created it in 2010, but we were unable to find any indication that the sculpture was created with either abortion or miscarriage in mind; visually, the sculpture represents a “spirit” child comforting a grieving mother. In later years, Hudacek acknowledged the piece’s popularity among anti-abortion groups globally, and described how that reaction had influenced his feelings about the topic of “life” in general (with respect to war and abortion).

Any definitive declaration of exclusive meaning relating to Hudacek’s “Memorial to Unborn Children” potentially negates the other, and the sculpture had also been shared as a representation of pregnancy and infant loss, particularly in relation to miscarriage and stillbirth. As is the case with most art, its meaning is inherently subjective — and commenters illustrated its “Rorschach test” nature. Readers with strong political views on abortion viewed it through that lens, and bereaved parents another.

We emailed Hudacek to see if he could clarify his inspiration versus his later feelings about the piece, but have not yet received a response.